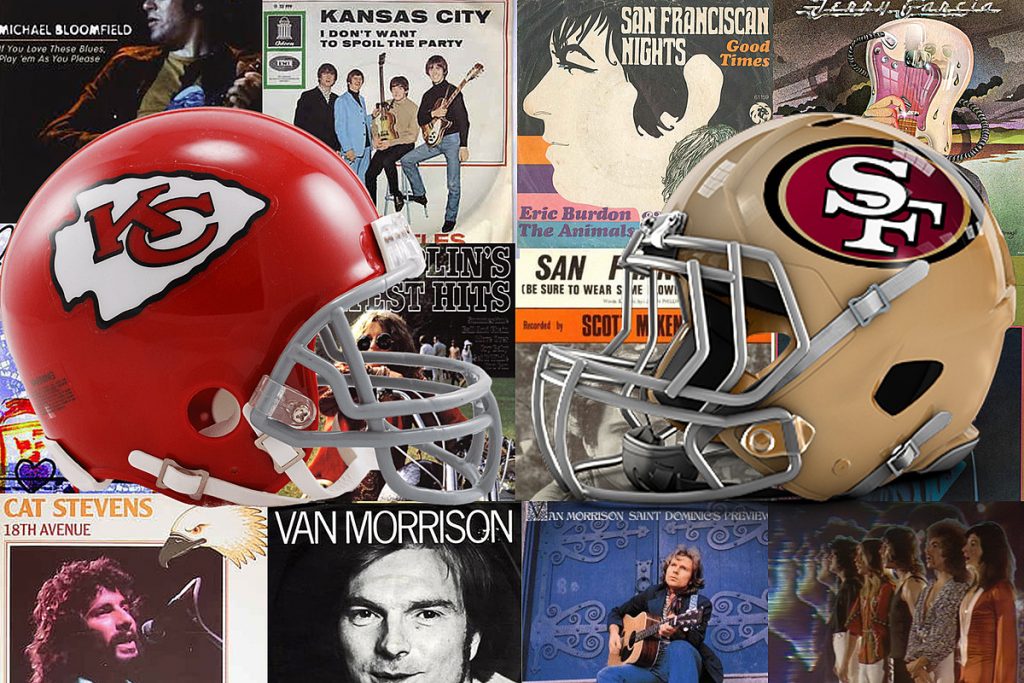 From Billy Joel‘s “New York State of Mind” to Eagles‘ “Hotel California,” rock history is filled with nods (both subtle and overt) to specific locales.

But not every city has been serenaded dozens or hundreds of times. With the Kansas City Chiefs facing the San Francisco 49ers in Sunday’s Super Bowl LIV, we decided to set up our own showdown by pitting those two cities against each other.

We considered including artists from both towns, but that left San Francisco with a hilariously unfair advantage (see: Journey, the Grateful Dead, Jefferson Airplane, Steve Miller Band, basically the entire psychedelic movement). Ultimately, we stuck with the inspiration angle, rounding up seven songs each about San Francisco and Kansas City. (And no, we didn’t split hairs over the difference between Missouri and Kansas. They’re five miles apart.)

To be clear: These aren’t necessarily songs that praise each place — what matters is that the city in question helped spawn a great song, even if the lyrics are dark or satirical. Before the Chiefs and 49ers battle on TV, check out our Classic Rock Super Bowl and decide which city has racked up the best stats.

Paul McCartney fronts this shout-along classic, a reworked version of the Jerry Leiber and Mike Stoller song popularized in part by Little Richard. “Ah, Kansas City, gon’ get my baby back home,” he belts over a swaggering 12-bar blues.

San Francisco may have been the U.S. LSD capital in the ’60s, but Kansas City spawned at least one psychedelic rock-star adventure. Over the winding orchestrations of “18th Avenue (Kansas City Nightmare),” Cat Stevens recalls the insanity of one acid trip gone haywire. “[That song] really does document very clearly what happened,” he told Spin. “I actually did run to the airport after coming off this terrible trip, and finally making it. And that was Gate 22 that I had to reach. So it’s all kind of really quite documented in that song.”

“Goin’ to Kansas City to bring Jim Jackson home,” Joplin sings on this early ’60s live cut, referencing the blues artist who wrote it. The track, which highlights the 1975 compilation Janis, only rises to bootleg level — but her gusto cuts through the murk.

Versatile blues-rock guitarist Mike Bloomfield added his own lyrical spin to the oft-covered Jim Jackson tune, weaving in edgy lyrics like “Just like the Arab told the Jew / You don’t like me, I don’t like you” over fingerpicked acoustic guitar.

“Excuse me, do you know the way to Kansas City?” a churchy choir asks on this winding, funky deep cut, which features Dr. John on piano. It’s unclear whether Morrison finds the titular town.

The Beatles drummer nods to his former band in more ways than one with his breezy mid-tempo rocker, crooning, “I’m goin’ to Kansas City” over a savory, George Harrison-styled guitar lead. Starr sings about whittling away the time while traveling “on a Greyhound bus from Tennessee” before shouting out the titular state in a classic Ringo pun.

Zappa doesn’t specifically mention Kansas City on this 10-minute fusion-rock instrumental from 1972. But it’s still a worthy salute to the Show Me State — or at least the vibe of his massive live band during the gig, captured on the posthumous 2006 concert LP Imaginary Diseases.

Scott McKenzie, “San Francisco (Be Sure to Wear Flowers in Your Hair)” (1967)

No song in rock history better documents the Flower Power spirit than this gently psychedelic hit from Scott McKenzie (written by the Mamas & the Papas’ John Phillips). “For those who come to San Francisco / Summertime will be a love-in there,” he sings. “In the streets of San Francisco / Gentle people with flowers in their hair.”

Animals frontman Eric Burdon opens this Summer of Love hit by urging his European fans to visit the hippie home base — a city filled with peaceful people, “jeans of blue” and “Harley Davidsons too.” (And some angry cops.)

Redding’s definitive song rolls over you as gently as the waves he sings about. He started writing the laid-back soul hit on a houseboat in Sausalito, Calif. — just a few miles of north of San Francisco. And even if there’s a deceptive world-weariness in the lyric (“I’ve got nothin’ to live for / Looks like nothin”s gonna come my way“), hope lies ahead in the “Frisco Bay.”

Morrison shouts out a San Francisco church on the horn-heavy “Saint Dominic’s Preview,” his lyrics dancing around the globe from Buffalo to Belfast to Paris landmark “Cathedral Notre Dame.”

Lyricist Robert Hunter, best known for his work with the Grateful Dead, gazes back wistfully at San Francisco’s vibrant Mission District on Jerry Garcia’s breezy solo cut. “There’s some satisfaction in the San Francisco rain,” he sings. “No matter what comes down, the Mission always looks the same.“

Steve Perry started writing this heart-tugging waltz as a tribute to Los Angeles, but he didn’t think the words fit. After joining Journey and moving to their home base of San Francisco, he made a small tweak that sparked a new direction. “I love San Francisco, and I love the Bay and the whole thing, and the words ‘the bay’ fit in so nice,” Perry told Uncle Joe Benson on the Ultimate Classic Rock Nights radio show. “‘When the lights go down in the city / And the sun shines on the bay,’ you know? It was one of those early-morning-going-across-the-bridge things when the sun was coming up and the lights were going down. So, it was perfect.”

The Mothers’ hilarious hippie critique is an antidote to the wide-eyed sweetness of “San Francisco (Be Sure to Wear Flowers in Your Hair)” — instead of basking in the glow of peace signs and free love, bandleader Frank Zappa framed the counter-culture movement as a bunch of “phony“ bandwagon-jumpers riddled with STDs, treating the experience like a vacation before they “take a bus back home.”