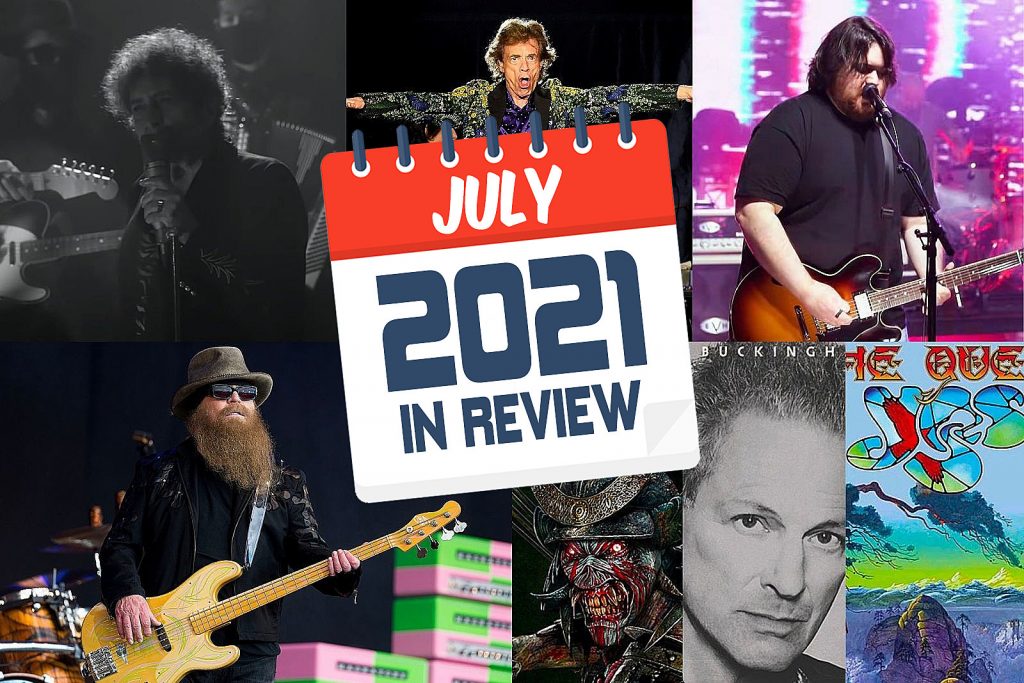 July 2021 marked both beginnings and ends of eras for the rock community.

New music was announced by several artists, some of whom hadn’t released material in several years. Iron Maiden revealed their 17th studio album, Senjutsu, would arrive in September. Lindsey Buckingham announced a new solo LP, a project that had been delayed not only because of the pandemic but also the singer and songwriter’s 2019 heart surgery. Yes also returned with their first batch of original music since 2014’s Heaven and Earth. Meanwhile, Wolfgang Van Halen finally debuted his band, Mammoth WVH, in front of a concert audience, and the Rolling Stones unveiled newly rescheduled U.S. tour dates, which would subsequently mark their first live shows in more than two years. Plus, Bob Dylan treated fans to a pretaped performance titled Shadow Kingdom.

Heartbreaking news arrived at the end of July, when it was announced that ZZ Top‘s Dusty Hill died at the age of 72 following health complications. Condolences poured in from fellow rockers around the world for the bassist, who had been with the band for more than 50 years.

You can revisit the biggest stories from July 2021 below.

In his first solo release since his split from Fleetwood Mac, Lindsey Buckingham noted that he wasn’t aiming to reinvent the wheel with his self-titled LP but to double down on the musical lessons he’d learned over the years. “As you age, hopefully you keep getting a little more grounded in the craft of what you’re doing,” he noted. “For me, getting older has probably helped to reinforce the innocence and the idealism that hopefully was always there.” When he announced the release in July, he also disclosed plans for a solo tour in the fall. Meanwhile, teasers led Iron Maiden fans to speculate that the band’s new album would be titled “Writing on the Wall,” which turned out to be the name of the album’s lead single. According to singer Bruce Dickinson, Senjutsu, their first album in six years, was recorded in early 2019 during a break from the road “so we could maximize our touring yet still have a long set up period before release to prepare great album art and something special as a video.” Prog-rock pioneers Yes also confirmed a new album was on the horizon, releasing its first single, “The Ice Bridge,” which was notable for being the band’s first without bassist and founding member Chris Squire, who died in 2015. “We commissioned several orchestrations to augment and enhance the overall sound of these fresh new recordings,” guitarist Steve Howe wrote in a statement posted to the band’s website, “hoping that our emphasis on melody, coupled with some expansive instrumental solo breaks, keeps up the momentum for our listeners.” A different kind of new music announcement also arrived early in the month from George Lynch, who revealed he would soon be releasing his first instrumental album, Seamless.

A little more than a year after the release of his 39th album, Rough and Rowdy Ways, Bob Dylan appeared in front of an audience again, but not in the traditional sense. The songwriter, who turned 80 earlier in the year, streamed a pretaped concert titled Shadow Kingdom, shot film-noir style, which featured songs mostly from his earlier years. Performing with a small house band in a speakeasy setting, Dylan opened the evening with “When I Paint My Masterpiece,” a track first recorded by the Band in 1971, then meandered through songs from several of Dylan’s most admired albums, including Blonde on Blonde, Bringing It All Back Home, Highway 61 Revisited and others, with each of the songs’ arrangements reimagined. Dylan later announced a live, in-person tour for fall 2021.

The Rolling Stones, a band not one to stay off the road for long, confirmed they would move forward with a U.S. tour in the fall. Most of the dates were rescheduled from canceled 2020 shows, but a few dates – like Vancouver, Louisville, Cleveland and Buffalo – were unable to be rescheduled. “I’m so excited to get back on the stage again and want to thank everyone for their patience,” Mick Jagger said in a statement at the time of the announcement. The 13-date run launched in September and ran for about two months.

Several weeks before their scheduled run of shows opening for Guns N’ Roses, Mammoth WVH, the group spearheaded by Wolfgang Van Halen, performed in front of a live audience for the first time at a surprise gig in Lawrence, Kan. Announced only a day before, the show swiftly sold out. On the set list for the evening were, as expected, songs from Mammoth WVH’s debut self-titled album, which was released in June. For the encore, the band included “Distance,” a song written and dedicated to Wolfgang’s late father, Eddie Van Halen, which made it to No. 1 on the Billboard Mainstream Rock Chart earlier in the year.

Shortly after ZZ Top got back on the road, news broke that bassist and founding member Dusty Hill had died at 72. The bassist had been battling health issues for some time, and even though he took a leave of absence after two shows in early July, he insisted the band continue the tour. “He said, ‘I’m going to go down and see what’s up,'” bandmate Billy Gibbons told Variety following Hill’s death. “‘In the meantime,’ he said, ‘the show must go on. Don’t forget it.’ And he was pointing his finger and shaking it.” Gibbons also noted that Hill encouraged the band to stay together after his death. “As Dusty said upon his departure, ‘Let the show go on!'” Gibbons told SiriusXM radio. “With respect, we’ll do well to get beyond this and honor his wishes.” Hill wasn’t the only musician who died in July 2021: Slipknot drummer Joey Jordison, Kansas violinist Robby Steinhardt, David Bowie guitarist John Hutchinson, former Uriah Heep frontman John Lawton and Cinderella’s Jeff LaBar also passed during the summer month.