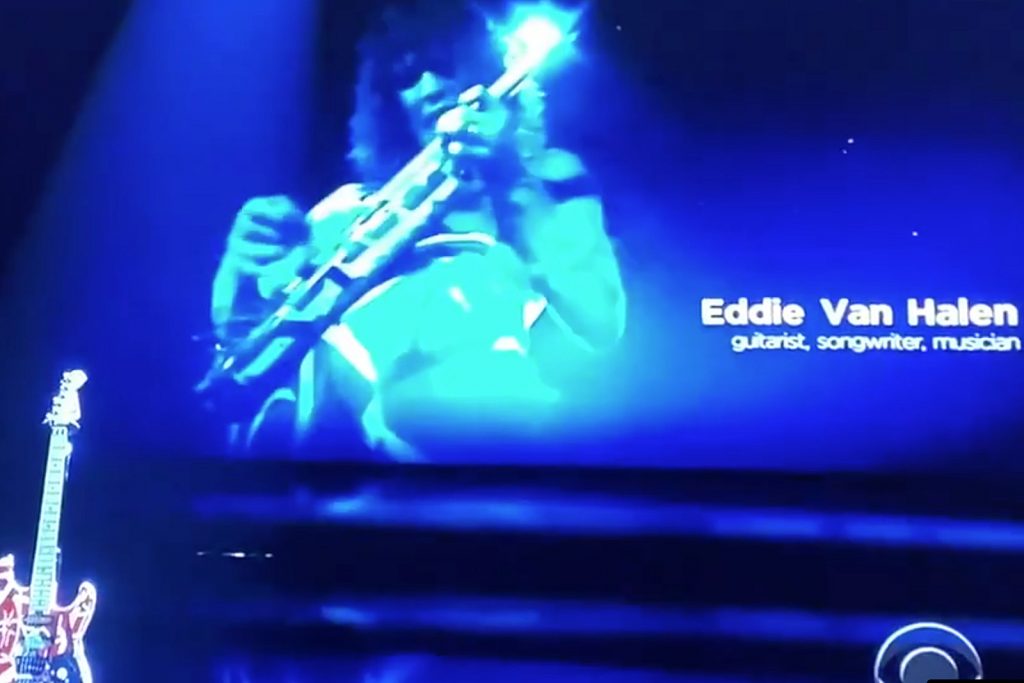 One of the producers behind the annual Grammy Awards show said he wanted a more elaborate tribute to Eddie Van Halen at last year’s show, but the late guitarist’s family rejected his suggestions.

David Wild also explained why it seems like rock music gets less attention during the ceremony than many people would like, but he insisted it was “not true” that the organization has no respect for the genre.

While other artists who died in the months leading up to the 2021 show were given two minutes of coverage, with other artists performing their music, Van Halen’s tribute amounted to video playback of his solo piece “Eruption” while one of his guitars stood onstage. That led many fans, and former Van Halen singer Gary Cherone, to react negatively. Wolfgang Van Halen later explained his disappointment over the tribute.

In a new interview on The Mitch Lafon Jeremy White Show, Wild said that “Eddie Van Halen was a friend of mine. I wrote a cover story on him, I worked with him on a book that he wanted to do at one point, I saw him a year before he died, I was at his house. I loved him. … We went and said to the family … ‘We have these people who could perform something. If Wolfgang wants to do something, he can do that. Tell us what you would be comfortable with.’ … They said, ‘No one should perform it.’ [It] was not like they wanted to say, ‘Only if you can get so-and-so’’ …  they didn’t want anyone, so we had to find the video.”

Wild said it was difficult to track down the performance and its rights, but the aim was to use “Eruption” because it would keep the focus on Van Halen himself and not the band. He added that “it was the family’s desire not to have something with a vocal” to avoid having to choose between singers David Lee Roth and Sammy Hagar. “It was to showcase Edward. So that’s what we did. And yet there was criticism, and it was frustrating to me, I will tell you.” He emphasized, “This was the family’s wishes.”

The producer said he was “often the guy pushing” for more rock coverage, as a fan of the music himself. “My first idea I ever had working on the Grammys was when Joe Strummer from the Clash died. … I suggested that we do ‘London Calling’ with Bruce Springsteen, with Elvis Costello, with the guy from No Doubt, with Little Steven [Van Zandt]. And from that to AC/DC, some of my happiest moments were rock ’n’ roll bands.”

Wild said the problem with the Grammys show is deciding “who do you put on that has the sort of mainstream, TV appeal? And often that’s why people rightly say, ‘Why is it always the Foo Fighters?’ And it’s because the Foo Fighters have carried that flag rather well, and they have ties to Nirvana. … So it’s a complicated issue, and I’m not happy. I wish there was more, but there’s not. … But when people say the Grammys hate rock ’n’ roll, believe me, that is not true.”