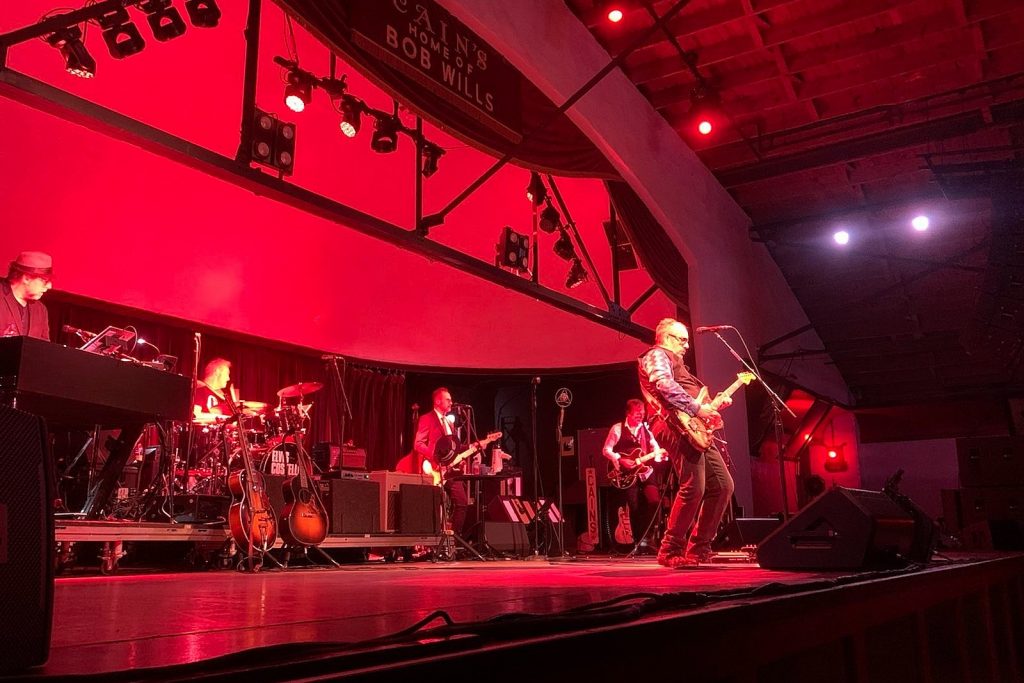 Costello, donning a glittering gold sequined jacket and leopard print shoes, appeared alongside his Imposters lineup, which includes Steve Nieve on keyboard, Pete Thomas on drums and Bruce Thomas on bass, plus the addition of Charlie Sexton on guitar, a regular member of Dylan’s own backing band.

Costello, who visited the Dylan Center earlier in the day, calling it a “beautiful thing,” incorporated a few Dylan covers into his setlist (available below) — Nashville Skyline‘s “I Threw It All Away” and Highway 61 Revisited‘s “Like a Rolling Stone” — and also recounted the story of the first time he met Dylan. One evening in the late ’70s, Barbara Streisand couldn’t make it to one of Dylan’s evening performances — Costello was offered her place and then invited backstage.

Costello has previously served as Dylan’s opening act on tours, in addition to performing with him on stage from time to time. One such memorable occasion occurred at one of Dylan’s concerts in London 1995, when Costello joined him for a rendition of “I Shall Be Released,” and then returned for the encore — with Carole King and Chrissie Hynde in tow – to sing the song again.

Dylan has long been an influence for Costello. In his 2015 memoir, Unfaithful Music & Disappearing Ink, Costello recalled a particular interaction he had with Dylan regarding a U2 single that had recently come out, 2009’s “Get On Your Boots,” which bore a resemblance to Costello’s “Pump It Up.”

But Dylan was, in essence, putting him on, Costello realized, seeing as Dylan’s “Subterranean Homesick Blues,” with its single stream of lyrics sung on the same note, had itself been a blueprint for “Pump It Up.” It was a long line of inspiration.

“U2’s ‘Get On Your Boots’ was probably to ‘Pump It Up’ what ‘Subterranean Homesick Blues’ is to Chuck Berry’s ‘Too Much Monkey Business’,” Costello wrote.

The Dylan Center will open to the public on May 10, featuring various artifacts from Dylan’s massive archive, which was first donated to George Kaiser Family Foundation of Tulsa in 2016.