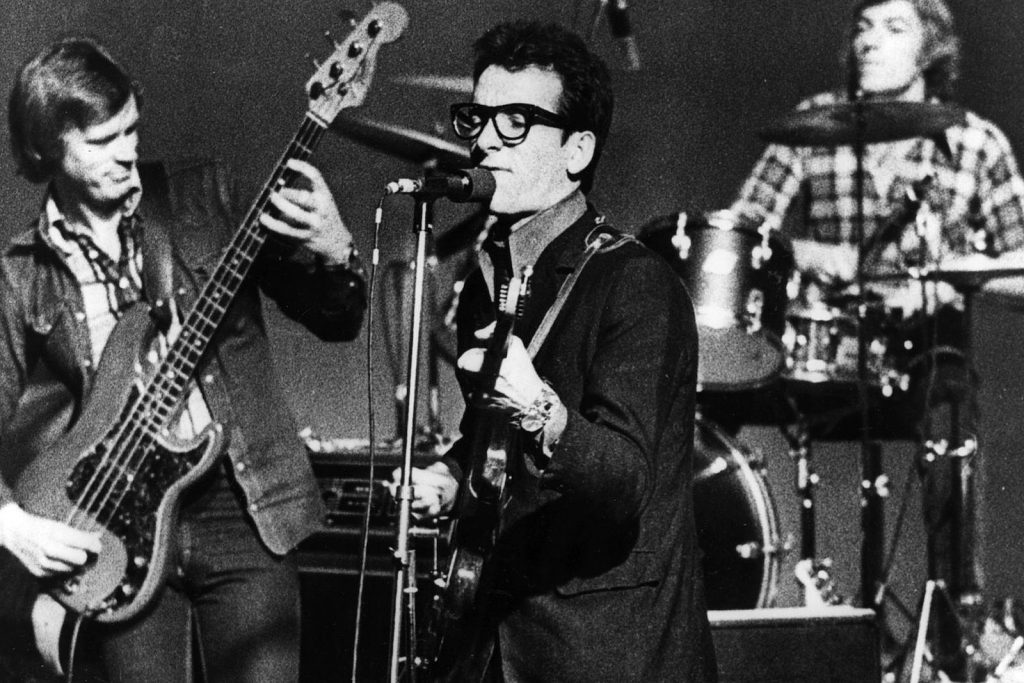 On July 9, 1977, a little more than a month before his 23rd birthday, Elvis Costello did what many young, aspiring musicians are told not to do: He quit his day job.

Costello had worked several odd jobs before he found his big break. After school, he took a job as an Admiralty chart corrector in Liverpool; he then worked in a bank office, where the words on the computer screen were so small that he needed glasses within six months. That job ended when he got into a scuffle with an employee who accused Costello of stealing stamps. “I had my hand around his throat before I knew what I’d done,” he wrote in his 2015 autobiography, Unfaithful Music & Disappearing Ink.

He eventually found himself employed as a computer programmer for cosmetics company Elizabeth Arden, which sold, as Costello put it, “flawed lipstick and powder at a discount, so if I’d been into glam rock, I might have made a killing.” It was by no means Costello’s idea of a dream job, but it paid the bills.

“I graduated from secondary school in 1973. It was the first year of 1 million unemployed in England in recent times – in Liverpool, anywhere up north, it was worse. I was very lucky to get a job,” he told Rolling Stone in 1982. “I had no ambition to go into further education; I just went out and got the first job I could get. … I got a job as a computer operator, which happened to be comparatively well paid: about 20 pounds a week. I’d just put tapes on the machines and feed cards in, line up printing machines – all the manual work the computer itself doesn’t have arms to do.”

In the late ’70s, the developments being made in computer technology were cutting-edge, but by today’s standards, they were drastically stunted.

“The IBM computer didn’t even have a monitor screen, so reams of paper were wasted on the mundane dialogue between man and circuitry,” Costello wrote. “If you entered an incorrect command, the IBM golf-ball printer simply typed out ‘Error’ in response. If you made the same mistake more than twice, the printer had been programmed to reply, ‘YOU’VE FUCKED IT UP AGAIN, YOU STUPID BASTARD.'”

Once Costello realized how easy the job was, it left him plenty of time to catch up on the things he cared about considerably more.

“I read the papers all day long because I was a computer operator and no one realized that the computer did all the thinking,” he told Q in 1996. “I wore a white coat, and people thought I was a rocket scientist because I was the only person in the building who could work the machine. That’s how specialist it was. Now everyone’s got one at home. It was as big as this room, like the Billion Dollar Brain, flashing lights and everything. Everyone thought I was a genius. It was brilliant. I just skived all the time.”

So, as far as Costello saw it, the computer gig was turning out OK. He’d work on music in his spare hours. “It was a great job. I took my guitar in,” he said. “I used to work evenings when it was the end of the month and the payroll stuff was due. I’d stay late, sometimes work 36 hours just on coffee and write two or three songs and read the music press.”

But that didn’t mean he loved the job. One of the songs written around this time was “I’m Not Angry,” which, contrary to its title, implied that Costello had much to be angry about – like his day job: “Spent all my time in a vanity factory, wonderin’ when they’re gonna come and take it all back.”

On another occasion, Costello sneaked his guitar into the building early in the morning and pulled it out after everyone else went home. He had another song idea in mind.

“Maybe it came from printing out a constant stream of invoices to duchesses for the beauty treatments they had enjoyed at the Arden Salon on Bond Street,” he wrote. “Or maybe it was just those smudged palettes of eyeshadow that were offered at a discount in the factory shop every Friday, but I’d developed a keen sense of the promise and the disguise of fashion. I wrote a song taking the contrary view, called ‘(I Don’t Want to Go to) Chelsea,’ and dropped into it a handful of disconnected images from some of the films I’d memorized.”

Costello had already released his first single, “Less Than Zero,” in March 1977, and was working steadily on what would become his debut album while employed at Elizabeth Arden.

But he knew he wasn’t going to be able to keep up the double duty for much longer if he wanted his music career to take off. He finally quit on July 9, 1977, and My Aim Is True was released less than two weeks later on July 22, earning widespread praise in the U.K. and U.S. Welcome to the working week.