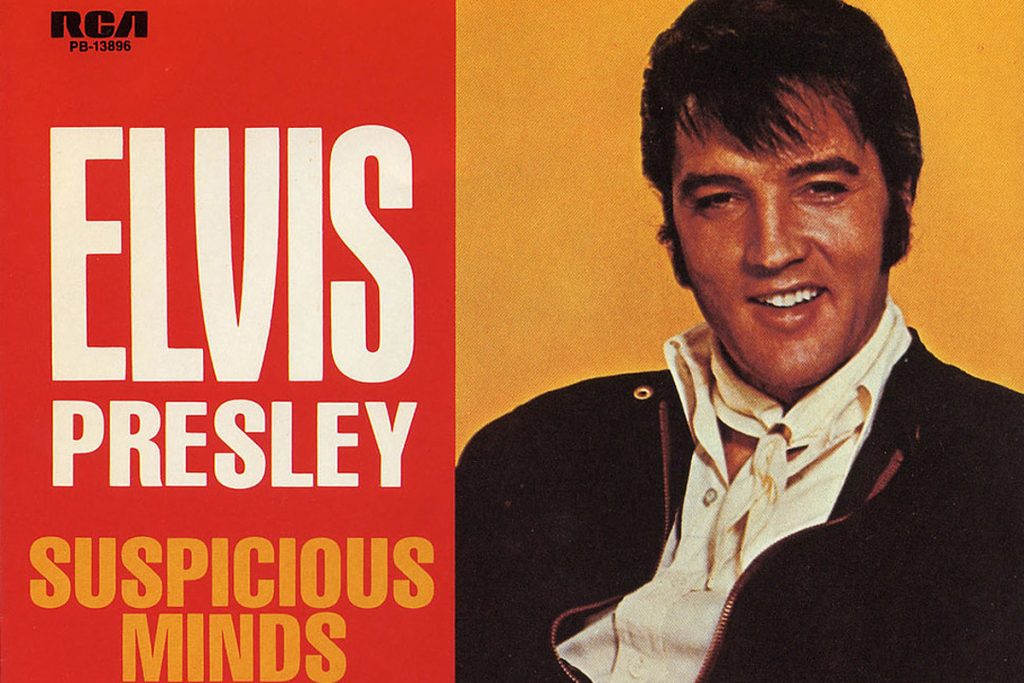 Elvis Presley enjoyed his last No.1 hit when “Suspicious Minds,” released the previous week, reached the top spot on Nov. 1, 1969. It was a massive transformation for the star, who’d endured a period in the doldrums before returning to the big time in 1968.

The song had been written and recorded by Mark James in 1968. Certain it would be a hit, he and his record label had thrown everything they could at it, but they lacked the scale to secure the required sales. Producer Chips Moman had retained a high regard for the song, however – it was said the label had given him a Rolls-Royce for his work on it – and his regard was to pay dividends.

“Late one night, fooling around on my Fender guitar and using my Hammond organ pedals for a bass line, I came up with a catchy melody,” James later said of his inspiration. “I was married to my first wife then but still had feelings for my childhood sweetheart, who was married back in Houston. My wife suspected I had those feelings, so it was a confusing time for me. I felt as though all three of us were all caught in this trap that we couldn’t walk out of.”

James had relocated to Memphis to become a house writer for Moman at American Sound Studio. When the producer told him that Presley wanted to work there – specifically so he could harness the country music power of house band the Memphis Boys – Moman also asked him to come up with songs for the King to consider. However, James was struggling for ideas. “We went to about two days before,” he recalled. “I was down, man, because I still hadn’t come up with anything.”

Then he thought of “Suspicious Minds.” “[I]t was like seeing a golden number one and I knew that was the song I’d been looking for,” he said. “I knew most of the guys with Elvis, some of them working there, around Memphis – [I] felt like telling George Klein, Marty Lacker, I felt like even shaking Elvis and saying, ‘This is a great one for you, man, to record.’ But I knew probably everyone in the world had probably said that to him. So all I could do is tell all the guys around him, ‘Get him to cut this, this is a great one for him!’” James wasn’t in the room when Presley first heard the song – and immediately asked to hear it again. Moman recalled that he took to it so quickly that he’d already learned it by the time he left for home with a tape under his arm.

Recording began at 4AM on Jan. 23, 1969, and eight takes were recorded over three hours before Presley added his vocal track. Once again, James wasn’t present, having attended a previous session and felt as if it made Presley uncomfortable. “I went to the studio one time,” the writer recalled. “I went upstairs and I heard they were taking a break. … And I went in there and he happened to be leaning up against the baffle. … I said, ‘Hey Elvis, I heard you might cut ‘Suspicious Minds.” And he said, ‘Hey Mark, been thinking about it’ – you know, just like Elvis would say it.”

Almost immediately after the session, however, a dispute arose which nearly prevented the song from being released. In the past, Presley’s manager Colonel Tom Parker had enforced a rule that Presley took a co-writing credit for any song he recorded, and many composers had agreed to the stipulation because the song in question was undoubtedly going to be a hit.

“When we finished, Elvis’s crowd of business people standing around said they wanted half my publishing rights,” Moman said. “I told them they were barking up the wrong tree. I accused them of stealing, they got angry, and I threatened to halt the entire session. Fortunately, RCA’s Harry Jenkins said, ‘This boy is right and we’re going to finish the session just the way he wants to.’ Jenkins sensed ‘Suspicious Minds’ was going to be big and he knew there would be plenty to go around.”

Of course, Jenkins was right. While the 1968 comeback special had put Presley back in the spotlight, “Suspicious Minds” helped cement that success. It was his first No.1 hit since 1962’s “Good Luck Charm,” and he said he found it “especially refreshing” to have topped the charts with a song that wasn’t associated with one of his movies. It was also to be his last No.1 during his lifetime, and it heralded the success of From Elvis in Memphis, the album that came out of the American Sound Studio recordings. Allmusic described those tracks as “some of the finest music he ever made, not only because they proved he could still be exciting, but because they’re musically diverse and emotionally rich”

James had, at times, suggested he wasn’t happy with the Presley version of his song; and producer Felton Jarvis drew a great deal of criticism for the way the single fades out then comes back again. (It’s been suggested he got the idea from Presley’s live shows, where the band would drop down in the song then reach a new crescendo to emphasize its dynamics.) Looking back later, James recalled being “blown away” when he heard the final version, although he’d worried at first that it was too slow. “[Presley] invited me to Vegas when ‘Suspicious Minds’ was going up,” he said, “and I remember he was at a table talking in a long room with Sammy Davis or Andy Williams, two people, way across the room. And I came in the room and he walked, stood up, walked clear across the room and said, ‘Hi Mark. How you been doing?’”

Presley later recorded another of James’s songs, “Always on My Mind.” But there could have been further collaborations, as the writer recalled: “After he died, I heard he’d always asked the guys in the studio, ‘Did Mark send me any more songs?’ Golly, I wish I had known that.”