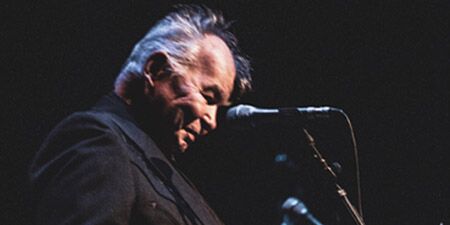 JOHN PRINE needed to get into his comfort zone to finish a new album, so his wife reserved a room at the Omni Hotel in Nashville for a week.

After nearly 50 years on the road, hotel rooms are a familiar enough sight. Following two bellmen to his suite, Prine settled in with four guitars and 10 boxes of legal pads to complete the album that would become The Tree of Forgiveness.

“I said, ‘If anybody sees me checking into the Omni, they’ll figure Fiona and I are on the outs,” Prine recounts with a sly laugh. “I grabbed my stuff just as fast as I could. She knows that after being on the road so many years, I function better in a hotel, so that’s what I did. I ordered room service and worked and watched my quiz shows. No pressure. This way, if I wanted to write at 3 in the morning, or 3 in the afternoon, I could. I’d go out to the swimming pool and go eat at the steakhouse. It worked out because by the end of the week, I was ready to go into the studio.”

The highly-anticipated album, The Tree of Forgiveness, is Prine’s first collection of new material since 2005’s Grammy-winning Fair and Square. Rather than going out on a limb, Prine cultivated the themes that have brought international acclaim since the 1970s. For example, he can take a topic like loneliness and make it funny (“Knockin’ on Your Screen Door”) or heartbreaking (“Summers End”). Perfectly aligned with his quirkiest songs, “The Lonesome Friends of Science” makes its point through the characters he calls “those bastards in the white lab coats who experiment with mountain goats,” as well as the discredited planet Pluto and the towering Vulcan statue in Birmingham, Alabama.

Prine teamed with Grammy-winning producer Dave Cobb to record in Nashville’s historic Studio A, enlisting friends like Brandi Carlile, Jason Isbell, and Amanda Shires to sing along. The songs are new, although some had waited to be finished for decades, like a co-write with Phil Spector called “God Only Knows.” Another incomplete song, “I Have Met My Love Today,” now celebrates the unexpected spark that leads to lifelong romance — with a dash of youthful innocence. The musical arrangements may be simpler than on past efforts, yet his unique ability to distill complex emotions into everyday language remains fully intact.

As he’s done for years, Prine found inspiration in writing sessions with close friends like Roger Cook, Pat McLaughlin and Keith Sykes. “Egg and Daughter Nite, Lincoln, Nebraska, 1967 (Crazy Bone)” is a lighthearted look at a bygone era, while “Caravan of Fools” (written with McLaughlin and The Black Keys’ Dan Auerbach) is a contemporary meditation on the weaknesses of powerful people. The poignant “No Ordinary Blue” wraps up a trilogy that encompasses 1991’s “You Got Gold” and 2005’s “Long Monday.” The album’s title is nestled in the final song, “When I Get to Heaven,” which brings a healthy dose of levity to what might have been a grave situation. Prine revealed in 2013 that an operable form of cancer had been found on his lung. Fortunately an operation proved successful. The diagnosis followed a 1998 surgery for neck cancer, which made him give up smoking for good.

“That was 20 years ago and I still miss cigarettes,” he admits. “If somebody lights up, I’ll go stand next to them after they’re up so I can get that initial blast. So I’d written this chorus about having my favorite cocktail and having a cigarette that’s nine miles long. I kept thinking, ‘Where the hell can I do that?’ The only place I can get away with that it is in Heaven because there’s no cancer there. So, the chorus dictated the setting of the song. I made up the verses around that.”

The Tree of Forgiveness is a family affair, too. (That’s Prine’s grandson giggling on the final track.) Following the 2015 death of business partner and manager Al Bunetta, Fiona Whelan Prine took on a management role. Their son Jody Whelan leads Oh Boy Records, which launched in 1981. As Nashville’s longest- operating indie label, Oh Boy expanded into book publishing in 2017 with Prine’s Beyond Words, which is an enchanting compilation of impeccable lyrics, guitar charts, vintage photos, and personal anecdotes from across his singular career.

Back in 1970, Prine was playing at the Chicago folk club The Fifth Peg when the young journalist Roger Ebert dropped in for a set. At the time, Prine was a 23-year-old mailman who had been singing his original songs every Thursday night for about two months. Ebert wrote a glowing review for the Chicago Sun- Times , essentially launching Prine’s music career. Kris Kristofferson became one of his earliest advocates; their friendship has lasted decades and they have toured together extensively over the years. In turn, Prine has invited a new generation of songwriters, such as Jason Isbell and Margo Price, to open his concerts. His 2018 tour schedule includes select dates with Sturgill Simpson.

Prine still remembers the first three songs he performed on any stage: “Sam Stone,” “Hello in There,” and “Paradise.” With humility, he recalls, “I sang those three songs and people just sat there and looked at me. I thought, ‘Wow, those are really bad.’ They wouldn’t even applaud.”

Of course, the opposite is true today. Those three songs – as well as “In Spite of Ourselves,” “Lake Marie,” “Fish and Whistle,” and so many others – are Prine signatures. His songs have been recorded by iconic singers like Johnny Cash (“Sam Stone”), Bette Midler (“Hello in There”) and Bonnie Raitt (“Angel from Montgomery”). He’s an uncredited co-writer on the now-classic “You Never Even Call Me by My Name” and his songs have been cut by country stars like Zac Brown Band (“All the Best”), Miranda Lambert (“That’s the Way the World Goes Round”) and George Strait (“I Just Want to Dance with You”). A gem from The Tree of Forgiveness, “Boundless Love” is also ripe for the picking.

Prine won his first Grammy for the 1991 album, The Missing Years , and he joined the Nashville Songwriters Hall of Fame in 2003. The Grammy Hall of Fame inducted his 1971 self-titled debut album in 2014.

Two years later he accepted the PEN New England’s Song Lyrics of Literary Excellence Award. At the age of 70, he was named Artist of the Year by the Americana Music Association in 2017. Naturally, The Tree of Forgiveness is rooted in that same observant songwriting that he’s crafted throughout his career.

“I kept saying when I was doing this album, it’s going to be my last one,” Prine admits with a grin. “But if things go really good with it, I can’t see why I wouldn’t do something else.”