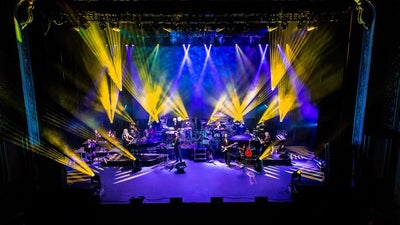 Mannheim Steamroller have been innovators of the neo-classical genre for over 40 years, blending the finest orchestral sections with electronic elements and a hint of rock to arrive at their remarkably unique sound. Not only are their live performances sonically robust, but they’re visually stimulating as well, featuring an incredible light show and illustrations that dance across giant projection screens. Whether they’re playing originals like “Catching Snowflakes on Your Tongue” or classics like “Joy to the World,” Mannheim Steamroller will have fans in the holiday spirit this season on their 2014 Christmas tour.

Mannheim Steamroller is the alias of composer Chip Davis, who created the moniker from “Mannheim roller”, a musical technique that was popular in Germany during the 1700s. Davis initially sought a record label to release his music, but the lack of interest led to the creation of his own label American Gramophone for his 1975 debut album Fresh Aire. He went on to release seven more albums in the Fresh Aire series, six of which were certified gold by the RIAA. His biggest success, however, came in 1984 with the release of Mannheim Steamroller Christmas, a massive hit and enduring classic of contemporary holiday music. Since then, his Christmas catalog has grown to include thirteen records, containing some of Steamroller’s biggest hits and holding the distinction of being some of the most requested Christmas music of all time. With more than 28 million albums sold in the US, Mannheim Steamroller will carry their musical enthusiasm with them throughout their 2014 shows.

“The band delivered from start to finish. What a wonderful way to get in the holiday spirit! Their musicianship is top notch and their performance is very entertaining.”

“Great concert with remarkable renditions of Christmas music. They are a very professional ensemble that made the event enjoyable and memorable.”

“I loved the Christmas concert!! The music, the video, and the interaction with the audience is amazing! I would definitely go see them again!”