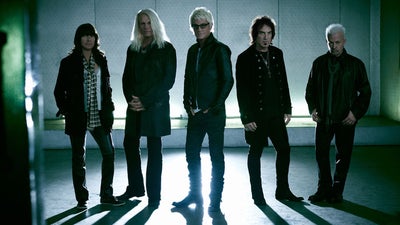 REO Speedwagon achieved grand success few could have imagined following a chance meeting between founding members Neal Doughty and Alan Gratzer, who were college students at the University of Illinois in 1966. They chose the band’s moniker from the REO Speed Wagon, a flatbed truck Doughty had learned of in history class, with the initials of its founder, Ransom E. Olds. Constant gigging helped them gain a strong foothold as a live act, but it wasn’t until 1970, upon Gary Richrath’s inclusion, that the band gained vast regional popularity.

1971 saw them sign with Epic, a relationship that stood through 14 releases, 40 million records and 13 Top 40 hits. In 1976, Kevin Cronin took over lead vocal duties and REO Speedwagon entered their greatest era. The band’s 1980 opus, Hi Infidelity, included four US Top 40 hits and sold over ten million copies, including the No. 1 single “Keep On Loving You.” 1982’s Good Trouble and 1984’s Wheels are Turnin, which included the No. 1 hit” Can’t Fight This Feeling,” kept the band in the limelight until the late 1980s.

The millennium brought forth well attended concert tours with fellow Illinois rockers Styx as well as Journey, and the band continues to be a hot ticket to this day.