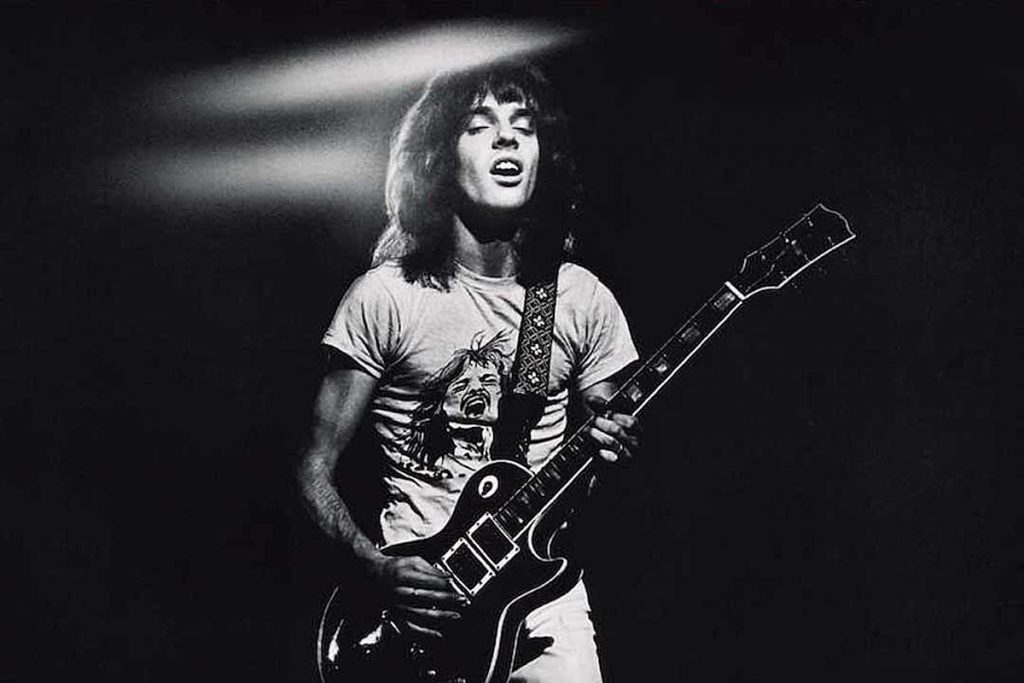 After three pleasant pop-rock albums that had failed to dent the top half of Billboard‘s 200 Albums chart — and didn’t chart at all in his native Great Britain — his career, which started as a teenage guitar prodigy in the Herd, was at a crossroads. It didn’t help that rhythm guitarist and keyboardist Andy Brown left Frampton’s band after just one year, as did bassist Rick Wills, who had played on Frampton’s previous solo efforts.

Instead of folding, Frampton recruited a new bassist, Andy Bown, and they, along with longtime drummer John Siomos entered Gloucestershire’s Clearwell Castle in October 1974 with Ronnie Lane’s Mobile Studio parked outside. The band’s leader also rose to the challenge, composing his finest set of songs to date and augmenting them with inventive arrangements and some of the best playing he ever committed to vinyl.

Frampton shows of the breadth of its namesake’s influences, now subsumed into a seamless mix of acoustic and electric guitar textures, including a liberal dose of a new weapon in Frampton’s arsenal, the talkbox. The double-tracked guitars on the catchy arena rocker “Nowhere’s Too Far (For My Baby)” are grittier than elsewhere on the album, and the twanging riffs and clangorous chords can trace a through line to Hank Marvin, the Shadows’ guitarist who was a major influence on many British rock guitar heroes.

Frampton’s descending triplets and clean-ringing harmonics on the funky country-rock shuffle “Fanfare” show how much he’d absorbed from gypsy jazz master Django Reinhardt, whom he discovered through his father’s record collection.

“He’d put on Django Reinhardt and Hot Club de France,” Frampton told this author in 2014. “Each time he would put that album on, it would take me longer to leave the room, until I never left. .. I’ve learned various different passages from Django, and then it goes into my library of licks and notes. It doesn’t sound like Django, but it’s totally inspired by his gypsy soul. I’d like to think that I’ve got some of it somewhere from all the listening I’ve done.”

Still, the standouts on Frampton are the four tunes that went on to greater fame a year later on Frampton Comes Alive!  “Penny for Your Thoughts” may be the slightest of these songs, but it’s no less enjoyable. It’s a spiraling whirligig acoustic guitar workout, with bucolic bluegrass overtones that shares a similar feel with Jefferson Airplane guitarist Jorma Kaukonen’s “Embryonic Journey.”

“We were right at the end of mixing the record, and I said that I had this little bit that would be cool to stick on,” Frampton told MusicRadar’s Joe Bosso in 2011. The tune became an acoustic staple of Frampton’s set starting in 1975.

On Frampton and in concert, “Penny for Your Thoughts” dovetails into “(I’ll Give You) Money.” The stomping mid-tempo rocker is the record’s hardest-hitting song, with grimy riffs and squealing fills that hearken back to the guitarist’s Humble Pie days. By the song’s end, Frampton’s double-tracked guitars have gone spinning off into spiraling riffs over a thundering drum pattern that recalls Led Zeppelin’s “When the Levee Breaks.” During a soundcheck at Wollman Skating Rink in Central Park in New York, Frampton came up with the song’s main riff, he told Bosso. “I started playing it and people were pretty blown away, so I knew I had something.”

But the best two songs on Frampton would soon become more famous. On “Show Me the Way,” Frampton’s talkbox seems distant from the rest of the song, his vocals feel more forced and the production is more cluttered with the talkbox popping in and unexpected. None of this detracts from the power of the tune. Acoustic guitar textures dovetail into electric riffs and talkbox tearaways. It’s a cascading string of pleasures, where every section of the song is a hook.

“Show Me the Way” was surpassed in cultural cachet by “Baby, I Love Your Way.” Frampton’s jangling, strutting guitar interpolates plangent fanning strums as a hooky verse tumbles into and even catchier chorus. Harmonized sustained notes thread through the melody as the song culminates in a gently pinwheeling solo. It’s easy to hear why this song, above all others by Frampton, became the songbook standard.

Although “Show Me the Way,” “Baby, I Love Your Way” and “(I’ll Give You) Money” continued his lack of success on the singles chart, Frampton managed to hit No. 32 on the album chart, easily his best placement to date.

To tour for the new album, Frampton and Siomos went on the road with guitarist-keyboardist Bob Mayo and bassist Stanley Sheldon. This is the band that recorded Frampton Comes Alive! at a series of summer and fall 1975 shows at Winterland in San Francisco, the Long Island Arena in Commack, N.Y. and on the SUNY Plattsburgh campus in Plattsburgh, N.Y.

That record finally broke Frampton, selling 8 million copies and delivering three Top 20 singles, including “Show Me the Way” and “Baby, I Love Your Way.” But because of some poor decisions, such as starring in the misbegotten film adaptation of the Beatles‘ Sgt. Pepper’s Lonely Hearts Club Band, Frampton could not sustain the success spawned by his live double-disc behemoth.

Frampton has joked that when his time comes, obituaries will lead with Frampton Comes Alive!, along with a variation on the title “Frampton Drops Dead!,” it’s clear the guitarist has made peace with capturing his distinct brand of lightning in a bottle – one of the biggest-selling live albums of all time, and the studio album that paved the way for its runaway success.