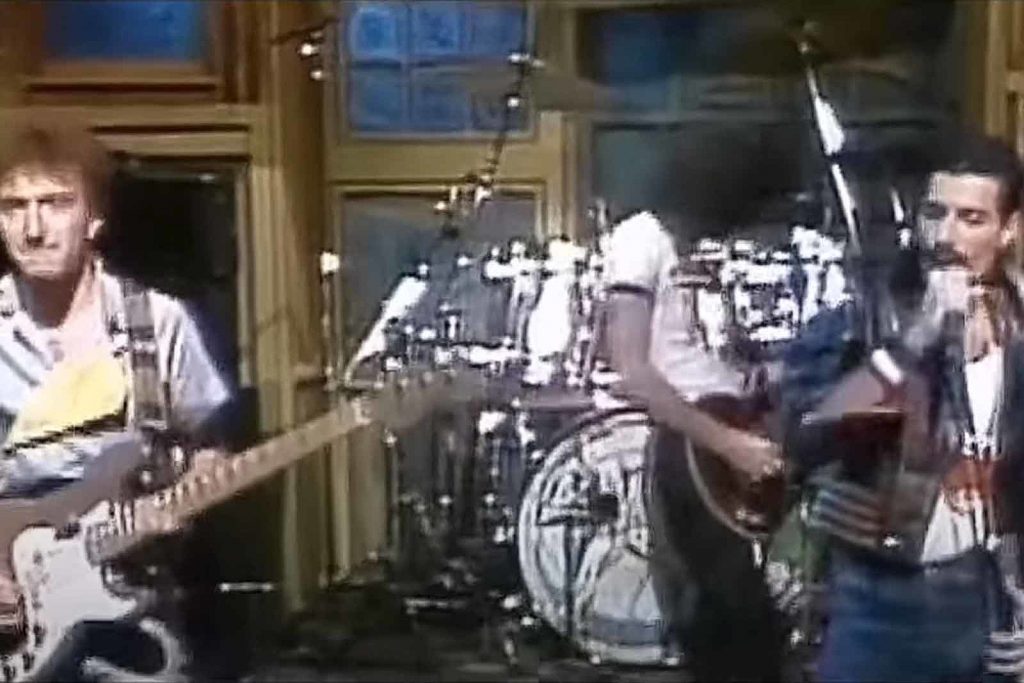 Being booked as a musical performer on Saturday Night Live has always been a gamble.

While SNL‘s initial variety-show approach to late-night live TV has largely been jettisoned in favor of the sketch comedy, there’s still no question how important a vehicle an SNL guest shot can be for record sales, breaking through or, in the case of some of the show’s most illustrious musical guests, cementing your legacy with an all-time killer performance.

Unfortunately, an off night, self-destructiveness (see: the Replacements) or the odd case of conspicuous lip-synching (looking at you, Ashlee Simpson) can turn a golden opportunity into a career-crushing catastrophe. Or, in the case of Queen‘s only SNL performance on the Chevy Chase-hosted Season 8 premiere on Sept. 25, 1982, one of the biggest missed musical opportunities of all.

With the band just having concluded an exhausting 27-city U.S. tour, Freddie Mercury, Queen’s operatically talented singer, came into Studio 8H with a shredded voice. Long having suffered from troublesome vocal-cord nodules, Mercury’s astounding, crowd-wowing range was reduced to something closer to a mere mortal’s. Where Queen’s infamously theatrical concerts and Mercury’s scientifically vetted vocal fireworks routinely blew stadium crowds out of their seats, the singer found himself facing down SNL‘s intimate studio audience with reduced firepower. Still, as the ailing Mercury would later rousingly proclaim in his final days, the show must go on.

Whether in deference to Mercury’s ailing voice or not, the choice of “Crazy Little Thing Called Love” for the band’s first number was a canny one for live television. The song’s rockabilly stomp, while providing ample opportunity for Brian May to solo on lead guitar, didn’t require Mercury to tap into the highest and lowest reaches of his vocal range. Even so, Mercury’s lead vocal is wobbly, with his creditable efforts to take the chorus into its customarily higher register repeatedly cutting off in a squeak before Mercury can reach his full power. Mercury, uncharacteristically, didn’t play keyboards on either of the band’s SNL songs; instead, he strummed acoustic guitar to back up May. (Touring musician for the band’s 1982 U.S. tour, Fred Mandel, took the keyboard part for the show.)

Famously, Mercury explained that he wrote “Crazy Little Thing Called Love” on the guitar, accounting for its stripped-down throwback flavor. And if Mercury’s typically self-deprecating assessment of his playing (“I did that on the guitar, which I can’t play for nuts, and in one way it was quite a good thing because I was restricted, knowing only a few chords.”) may be a bit harsh, the choice of the song as their opener on live U.S. television does smack of strategic defense of Mercury’s ragged vocal cords.

With Queen’s latest album, the underwhelming (but for one exception) Hot Space having just been released earlier in 1982, there was no hiding from expectations when it came to the band’s concluding number. “Under Pressure,” released as a single in late 1981, was already one of Queen’s most popular tracks and, strained vocal cords be damned, Mercury was enlisted to wow the Studio 8H crowd with the band’s soaring, emotionally charged hit.

But more things were working against that than Mercury’s undeniably halved vocal capacity. Written by Mercury and David Bowie while both artists were recording in Switzerland, “Under Pressure” derives its distinctive power from the two singers’ contrasting voices and sensibilities, the alternating lyrics scaling up and up in the song’s deeply humanistic plea for relief and understanding. Collaboration aside, after the Swiss recording session, “Under Pressure” was strictly a Queen live number, with Bowie only picking up the song in concert after Mercury’s 1991 death. And while Mercury was more than dynamic enough to adapt the duet to a solo vocal showcase normally, the hobbled singer here makes consistent concessions. (Drummer Roger Taylor chimes in to shore up Mercury’s rendition of Bowie’s parts.)

There’s an unusual intimacy in hearing Mercury’s initial hollow bark in the opening lines, unmistakable hoarseness speaking to the long and arduous hours spent on the band’s 1982 U.S. tour. The line “Pray tomorrow gets me higher,” traditionally a staircase for Mercury’s inimitable voice to ascend, finds the singer steering into a more human, punk-sounding range. It’s not bad, it’s simply not what Mercury was put on Earth to do.

Throughout, the song’s flashiest vocal gymnastics are strategically retooled. Mercury’s near-spoken recital of “Chippin’ around, kick my brains ’round the floor/These are the days it never rains but it pours” are oddly powerful in their plainness of delivery, and the climactic ramp-up of “Pray tomorrow gets me higher, higher, high,” normally a show-stopping display case for Mercury’s remarkable upper range, emerges instead as a consciously operatic baritone that’s impressive in a way. Sadly, Saturday Night Live has never known how to present or protect its musical acts as a rule, and both the muddy in-studio sound mix and the cramped 8H stage seem designed to double down on Mercury’s temporary handicap. Being Freddie Mercury, however, “Under Pressure” manages to build to its wonted emotional payoff through sheer effort and star power.

In his short leather jacket and tight jeans, Mercury manages to inject his showman’s verve into performances he realizes needs it. There’s a particular heartbreak in knowing that this would not only be the only time that Queen would play Saturday Night Live but that this off night would turn out to be the band’s last live performance in the States, the Hot Space tour having wrapped up its U.S. leg 10  days earlier in California.

Queen continued to record and perform live (including the legendary show at Wembley Stadium in 1985), right up until Mercury’s death from AIDS in 1991. In the end, the Saturday Night Live performance stands as a missed but game opportunity for one of rock’s greatest frontmen to dazzle a massive American TV audience. That only “Crazy Little Thing Called Love” was deemed worthy of inclusion on the 2003 box set SNL: 25 Years of Music is telling. “Under Pressure” is by far the bigger hit, but, on this unfortunate night, a brave but bone-tired Mercury just couldn’t smash it.