Freddy Krueger Crawls Out of Our Dreams 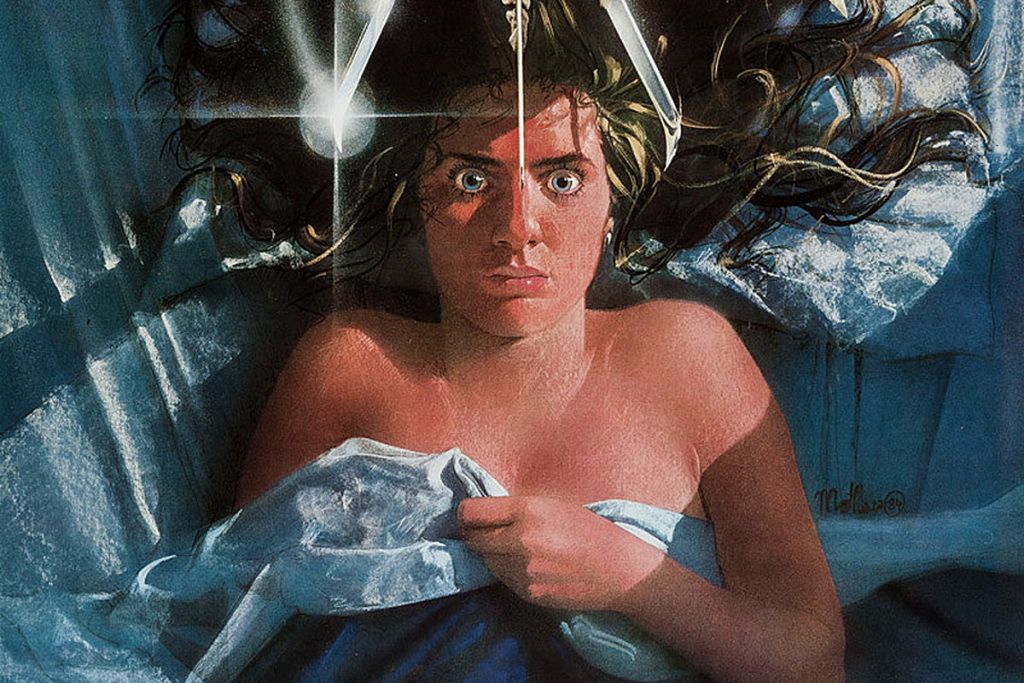 At their best, Wes Craven‘s horror films explore the collision between two worlds: one that’s bright, normal and safe, the other dark and seething with terror. Nowhere is this more clear than in A Nightmare on Elm Street, a masterpiece released in November 1984.

It’s the movie that established Craven as one of the most iconic horror directors of his generation and introduced Freddy Krueger, an all-time great in the pantheon of movie monsters, memorably played by Robert Englund. It also features a truly impeccable scary movie concept: as long as you stay awake you’re safe, because Freddy’s domain is the land of dreams. But no one can stay awake for ever – “The record is 11 days,” says a character at one point – and so sooner or later Freddy’s coming for you.

The plot starts simply enough. Four high school kids discover they’ve all begun having nightmares featuring a terrifying figure in a red and green shirt, his face is a mass of burn scars and his right hand is encased in a glove with razor blades attached to the fingers.

At first this seems like nothing more than a creepy coincidence, but then one of the girls in the group, Tina (Amanda Wyss), gets killed in her dream. In real life, her boyfriend Rod (Nick Corri) watches in terror while razor marks are cut into her flesh and she gets thrown around the room like a rag doll. From this point on, the stakes are clear. Even though Rod gets arrested for the crime, the movie’s protagonist, Nancy (Heather Langenkamp) knows that Freddy is coming for all of them in their dreams.

When first Rod and then Heather’s boyfriend Glen (Johnny Depp, in his first role) are also killed by Freddy, Heather finds out another vital piece of information. Her mother reveals that there was once a man in the neighborhood named Fred Krueger who killed 20 kids before he was finally caught. When he got off on a technicality – “Somebody forgot to sign the search warrant in the right place” – the parents in the neighborhood gathered together, hunted him down and burned him alive. And now he’s back, taking revenge by killing their children. The only way Heather can stop him is to lure him out of the dream world into this one, where he might be vulnerable.

Craven tells this story with the workmanlike direction for which he was known and which he credited to starting out as an editor in the low-budget and pornographic film worlds (after quitting his job as a college professor), where everything had to be lean, clean and to the point. There are no self-aggrandizing directorial frills, and every shot, cut and piece of blocking for the actors is designed to do nothing else but propel the story forward. This technique also allows him to move between dream world and real world in a disconcerting way: because both are visualized in such an unadorned manner that we are never certain which one the characters are in.

There is, however, one piece of his unique persona that Craven injects into this straight-ahead framework: a subtle and very strange sense of humor.

Freddy is a cackling madman who seems equally entertained by the way he torments the teenagers and by his own sexual innuendo, such as when he calls Heather on the phone, announces that he’s her boyfriend now and then turns the phone receiver into a copy of his own mouth to give her a lick on the lips.

The movie also has a wickedly dark sense of humor about the relationship between teens and adults. In a snarky, ’80s way, almost all the grown-ups in the film are depicted as somewhere between incompetent and venal. They’re drinking themselves into stupors, going off to Las Vegas with their sleazy boyfriends or simply too dumb to understand what’s happening, while their kids are fighting to the death with Freddy.

In this way, Craven continued a theme he pursued throughout his career. His breakthrough feature was the low-budget shocker The Last House on the Left (1973), which he made with gruesome abandon because he assumed none of his friends or family would ever see it. Instead, it became something of a sensation, lauded by some critics and reviled by others as obscene. It tells the story of a group of hippies who rape and murder a girl, only to find themselves at the house of the girl’s parents, who dispatch them in grisly ways. It shares with A Nightmare on Elm Street both the trope of two worlds colliding – hippies versus straights – and a savage irony about the consequences of revenge for the people who engage in it.

Craven’s next film, The Hills Have Eyes (1977) pushed this a step further, showing us a family driving an RV through the Nevada desert, when they’re attacked by a depraved, murderous family that is their exact mirror image. Like A Nightmare on Elm Street would do with the ’80s trope of teenagers versus adults – seen elsewhere in things like The Breakfast Club, Ferris Bueller’s Day Off and Pump Up the Volume – The Hills Have Eyes took the feeling of social conflict of the moment and turned it into a perfect horror film metaphor.

Craven, who died in 2015, had other larger and smaller successes in his career. These included Swamp Thing (1982), The Serpent and the Rainbow (1988) and the Scream franchise, which kicked off a cycle of ironic, post-horror films that continues to this day with things like Happy Death Day.

But A Nightmare on Elm Street will always remain his capstone work. It manages to both encapsulate and transcend the slasher genre. Unlike many of its lesser imitators, it carries a deep sense of personality and imagination, and feels like the creation of someone with something to say about the world. It was a smash hit and spawned eight sequels, one of them a crossover project with Jason of the Friday the 13th franchise, which was created by Craven’s longtime collaborator Sean Cunningham. It has also given birth to a TV series, comic books, novels and vast troves of memorabilia.

One senses that even though Craven is gone, Freddy Krueger will live on and probably be reincarnated more than a few times in the future. For horror fans and movie fans both, the story of his origin is a film worth remembering and revisiting.