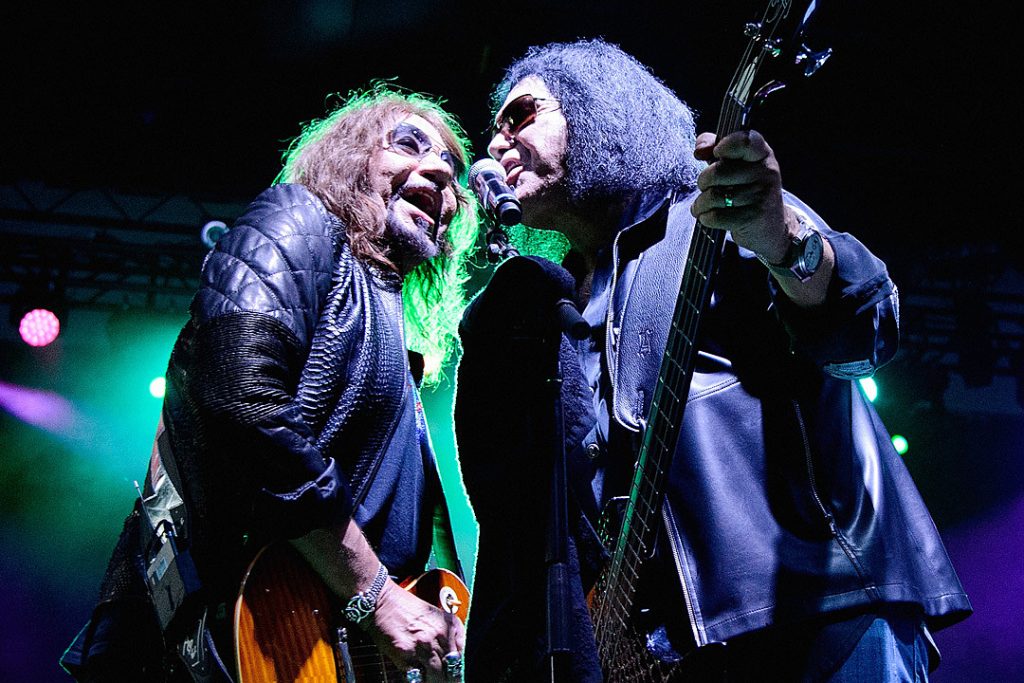 Gene Simmons wished former Kiss bandmate and lead guitarist Ace Frehley a happy 71st birthday and once again invited him to join the band onstage during its ongoing End of the Road farewell tour.

“Happy Birthday, Ace. And many more,” the singer and bassist tweeted. “The invitations still stand. Jump up onstage with us for encores. The fans would love it.”

The prospect of Frehley and original Kiss drummer Peter Criss joining Simmons and Paul Stanley onstage has come up several times since the End of the Road tour began in 2019. Simmons, however, made it clear that he and Stanley would like their former bandmates to join them in a limited capacity, rather than playing entire shows.

“Ace and Peter have gotten three chances,” Simmons told Guitar World in 2019. “They were in and out of the band — fired — three times. For drugs, alcohol, bad behavior, being unprofessional. … So the only reason Ace and Peter were let go the first time, and then the second time and then the third time, is that they weren’t carrying their load. … So the short answer to your question is we’d love to have Ace and Peter join us here and there. And if they don’t, it’s not going to be because of us. But they’re never going to be in Kiss again.”

Frehley fired back at Simmons in a lengthy Facebook post, calling his former bandmate “an asshole and a sex addict who’s being sued by multiple women, and you’re just trying to sweep it all under the carpet!” He also claimed that Simmons “groped my wife and propositioned her in Los Angeles at the Capitol Records building behind my back.”

The guitarist also disputed Simmons’ version of events regarding his departure from the group. Frehley said he quit Kiss twice because Simmons and Stanley were “control freaks, untrustworthy and were too difficult to work with.” He also said Simmons’ “slanderous” comments about his substance abuse issues had “cost me millions of dollars, and now that I’m over 12 years sober you’re still saying I can’t be trusted to play a whole night’s show!”

Frehley’s first tenure with Kiss came to an end in 1982. He rejoined the band in 1996 for their successful reunion tour and stayed with them until 2002. In 2017, Frehley joined Simmons’ solo band onstage at a fundraising show for victims of Hurricane Harvey, suggesting their relationship had improved — but after their public spat in 2019, it seemed as if the duo had taken one step forward and two steps back.

Previously, Frehley said he would only rejoin Kiss onstage if he could reclaim his Spaceman identity from current guitarist Tommy Thayer. “The only way I would consider coming back is [if] I took over Tommy’s place,” he told the Juliet: Unexpected podcast in 2018 (via Blabbermouth). “He took over my place — a character that I invented. He’s pretty much going through the motions, but the only way I would consider going back is to replace Tommy and regain my throne. Number two, I’d like a big paycheck because I think I deserve it.”

Fans who want to wax nostalgic about Kiss’ vintage lineups can catch Frehley, Criss and fellow alumni Vinnie Vincent and Bruce Kulick at next month’s Creatures Fest in Nashville.