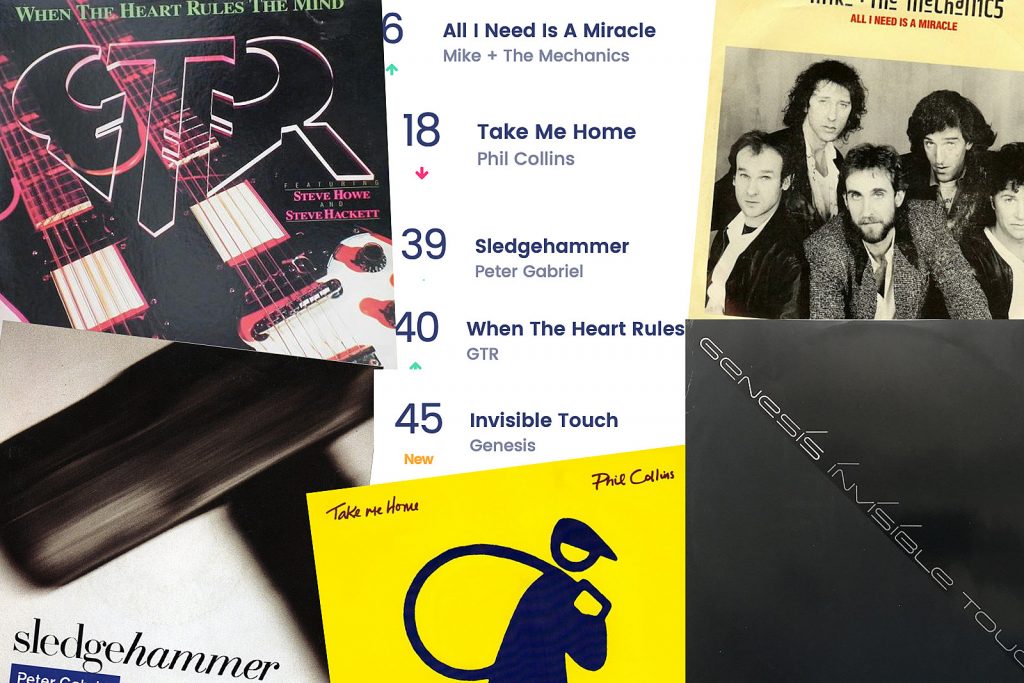 The solo acts, the side projects, the supergroups: the Genesis tree has many branches.

Not all of these records earned much fanfare but most have been interesting for one reason or another. (Does anyone but Tony Banks remember the keyboardist’s underrated, surprisingly hooky 1983 LP, The Fugitive?) Whatever the origin — probably their respective shifts toward brighter, more polished sounds — the Billboard charts were primed for Genesis alumni in the mid-’80s. The public couldn’t get enough of the prog-pop crew. It was positively Genesis fever!

For proof, check the Hot 100 chart for May 31, 1986. Five Genesis-related songs were jockeying for space with Whitney Houston‘s eternal ballad “Greatest Love of All” (that week’s No. 1), Orchestral Manoeuvres in the Dark‘s Pretty in Pink anthem “If You Leave” and the Outfield‘s new-wave belter “Your Love.” Not even their hilariously bad fashion choices (see Phil Collins‘ balding-mullet look) could halt their domination.

At No. 45 that week was the mothership band with “Invisible Touch,” the title track to its latest blockbuster LP. A fizzy dance-rock anthem with Collins at his most charismatic, the song was issued May 19 as the record’s first single — and it eventually became their first and only U.S. chart-topper, one of that summer’s signature tunes.

By the ’80s, with all three members operating solo careers, Genesis had arrived at a democratic songwriting approach — aiming for group compositions through live-in-the-room jams. For “Invisible Touch,” they started with a drum-machine foundation, Mike Rutherford adding his choppy, echoing guitar riff over top. Banks worked through the song’s subtly elegant chord progression (including a late key change), and Collins wrote the lyrics about a person’s mysteriously seductive — if destructive — force. (The main chorus hook, he’s noted numerous times, was a spur-of-the-moment line inspired by R&B and pop artist Sheila E.)

“‘Invisible Touch’ is my favorite Genesis song, and it came more or less out of nowhere,” Collins told The Guardian in 2014. And it’s easy to see why: While it’s unfair to write off his bandmates’ essential contributions, few Genesis tunes could slot more seamlessly into a Collins solo set list.

Five chart spots ahead of “Invisible Touch” was GTR‘s “When the Heart Rules the Mind,” a charming if bland slice of AOR cheese coauthored by the band’s iconic prog guitar Steves: Hackett (formerly of Genesis, having departed in 1977) and Howe (past and future Yes). Unlike Howe’s other prog-gone-AOR supergroup, Asia, GTR suffered a premature death. (Well, maybe not premature if you ask J.D. Considine, who famously reviewed the band’s self-titled LP with his own three-letter abbreviation: “SHT.”) But Hackett is still fond of the spit-shined rocker, which climbed all the way to No. 14 on the chart.

“I loved ‘When the Heart Rules the Mind,’” he told Something Else! in 2012. “I thought it was a great tune. That was the best of the band, straightaway, on that first track. It sounded great on American FM, because that compressed it and made it sound much more powerful.”

Listen to GTR’s ‘When the Heart Rules the Mind’

Just one entry ahead of GTR was “Sledgehammer,” the first single from Peter Gabriel‘s fifth solo album, So. The singer, once best known for donning fox heads and dressing up as grotesque genitalia, had already scored a couple minor hits after leaving Genesis in 1975: “Solsbury Hill” reached No. 68 two years later, and he had incremental chart improvements with “Games Without Frontiers” and “Shock the Monkey.”

But “Sledgehammer,” like the rest of So, was uncharacteristically up — anchored, in this case, by a Stax-inspired vocal, Tony Levin‘s growling bass riff and a peppy brass section. “I used French-African drummer Manu Katche in conjunction with Wayne Jackson of the Memphis Horns on the track, and it was a commanding blend of parallel heritages,” Gabriel told Spin that year. “I love writing about romantic sexuality, and I need to discover ways to let my attraction to African funk be mutually enhancing for the participants.”

Paired with an eye-popping video that included stop-motion animation, the song became Gabriel’s biggest hit, eventually topping the Hot 100 and landing three Grammy nominations (including Song of the Year).

Gabriel appeared on two charting songs that week, having offered backing vocals (along with Sting and Helen Terry) to Collins’ solo sing-along “Take Me Home.” The track, a drum machine-dominated centerpiece from 1985’s No Jacket Required, peaked at No. 10 on April 26. Though it didn’t reach the same commercial heights as the album’s chart-toppers, the Prince-inspired “Sussudio” and the airy ballad “One More Night,” it was still hanging around the Hot 100 in May — a testament to Collins’ popularity in that golden era.

Like with many of Collins’ most famous songs, the glossy production of “Take Me Home” disguises some bleak subject matter. “A lot of people think this next song is just about going home, taking me home,” he said, introducing an acoustic performance on VH1 Storytellers. “But … it’s a much darker song. The way I see this song was about One Flew Over the Cuckoo’s Nest. … It’s really a mental asylum.”

Conversely, “All I Need Is a Miracle,” Rutherford’s second hit with Mike + the Mechanics, is pure surface-level emotion — a soft-rock sugar rush about romantic redemption. The track, sung by co-vocalist Paul Young, reached No. 6 that week (and later climbed to one slot higher) — making it the second hit from the band’s self-titled debut LP, following “Silent Running (On Dangerous Ground).”

Listen to Mike + the Mechanics’ ‘All I Need Is a Miracle’

“I don’t know any other bands who’ve done what we did: run successful solo careers along with Genesis,” Rutherford told The Guardian. “Most guys start a solo career because they’re frustrated, but that wasn’t us. Genesis was going great, but we just wanted variety. Was there any competition between us? I suppose. But we all knew we couldn’t beat Phil.”

Maybe not in the long run. But it made for a fascinating chart battle, proving just how far they’d all evolved, for better or worse.