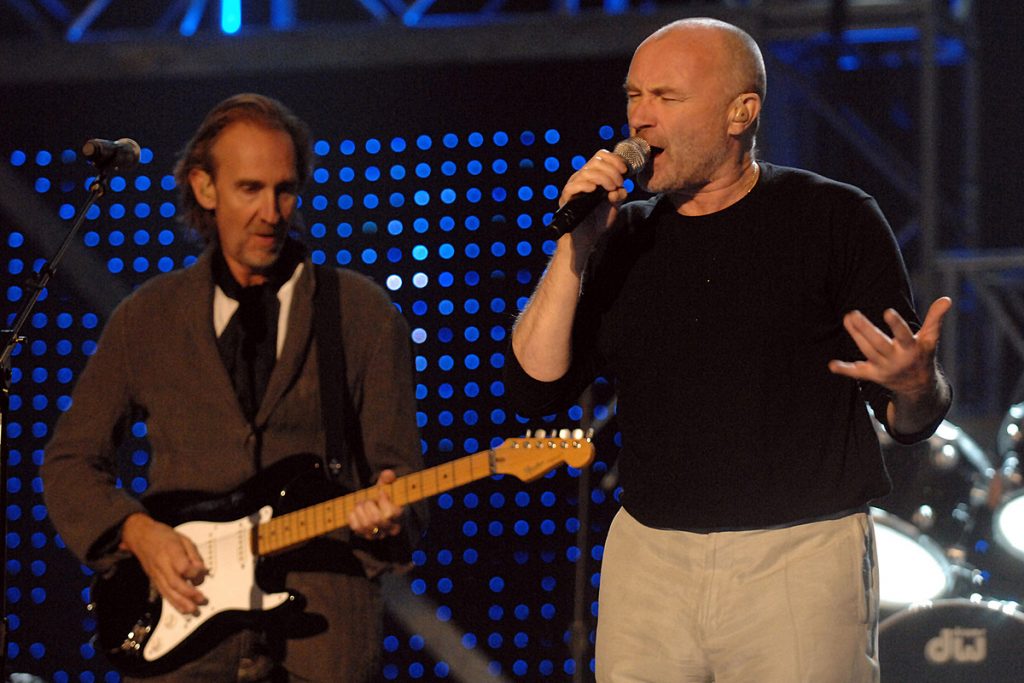 The 10-date trek of the United Kingdom and Ireland, dubbed The Last Domino?, will mark their first live shows in 13 years.

Tickets for the tour, which kicks off Nov. 16 in Dublin and concludes Dec. 11 in Newcastle, go on sale Friday, March 6 at the band’s official website.

The jaunt will not feature former singer and co-founder Peter Gabriel, who fronted the band from 1967 to 1975, or guitarist Steve Hackett, who remained in the lineup from 1971 to 1977. The prog-rock act originally slimmed down to a three-piece for its 1978 LP, … And Then There Were Three … , and that configuration lasted through the bulk of the band’s run. (After Collins’ final record with the group, 1991’s We Can’t Dance, Banks and Rutherford recruited singer Ray Wilson for the most recent Genesis record, 1997’s Calling All Stations.)

In 2005, Gabriel and Hackett joined the other members for tentative discussions about a reunion of the quintet lineup that recorded prog-rock staples like 1973’s Selling England by the Pound and 1974’s The Lamb Lies Down on Broadway. But Genesis wound up reuniting for a 2007 tour as a three-piece, enlisting their regular live members Daryl Stuermer (guitar) and Chester Thompson (drums). Stuermer will join the band on the 2020 tour, with Collins’ son (and recent solo touring member) Nic on drums.

The announcement follows weeks of rumors. In June 2019, Rutherford’s band Mike + the Mechanics opened for Collins on tour, and the bassist-guitarist joined Collins onstage to play Genesis’ “Follow You Follow Me.” In January, Banks and Rutherford were captured on the big screen during a sporting event at New York City’s Madison Square Garden, fueling speculation that they were meeting with Collins to discuss a potential reunion.

The following month, message boards and social media lit up after an anonymous source claimed the band was prepping for a tour. Genesis themselves added to the frenzy by posting photos of the trio lineup on Instagram.

For years, fans and journalists have pressed the musicians — including Gabriel and Hackett — about the possibility of a reunion, earning responses that ranged from cautiously hopeful to pessimistic.

“I think if we’re going to do anything, we should do “The Silent Sun” since it’s the 50th anniversary of that song,” Banks told UCR in 2018. “We don’t really plan too much, and Peter’s a terribly difficult person to tie down. I see him every so often, but … [Laughs] he’s so difficult, really – even if he’s enthusiastic about it. [It] was 20 years ago – or almost that long ago – when we did the last Genesis reunion. About five years before that, there was talk about doing something with Peter, but Peter was … [Laughs] originally into the idea, and then it became difficult. Even getting everybody in the same place at the same time is impossible, really. The only chance you’ve ever got is Phil, Mike and I together, but even that’s a long shot because of Phil not quite being where he was 20 years ago.”

“I wouldn’t say there isn’t not a possibility,” Collins told Rolling Stone the same year. The singer added that any reunion would “have to be with Nic on drums” because he didn’t feel he was “capable” of the task. (The elder Collins suffers from nerve damage that limits his ability to play drums.)

“Me, Mike and Tony are pretty close still,” he said. “I can’t imagine what it would be like if I didn’t play the drums, but anything is possible.”