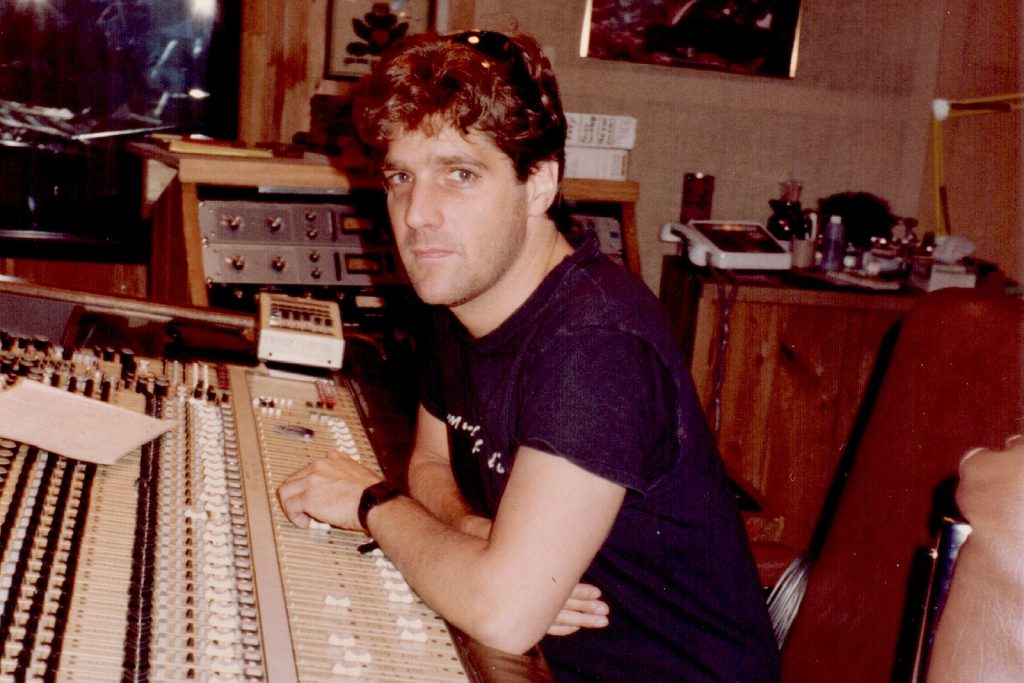 Glenn Frey had a creative mission for his first solo album, and one need look no further than the title: No Fun Aloud. “[It] was a busting-loose album for me,” Frey told UCR while promoting its follow-up, The Allnighter, in 1984. “I didn’t want to go in there and kill myself like we did on the Eagles albums. I wanted to have fun, just like the title says. And I did.”

Jack Tempchin, a longtime friend who cowrote six of No Fun Aloud‘s 10 tracks — five with Frey — seconds that notion. “[Eagles] were under an incredible amount of pressure because of their success,” he tells UCR. “How can you get together when you’ve written a song that everyone in the world knows, and now you have to write another album? So he just wanted to relax and do fun stuff on this album.”

That philosophy paid off for Frey. While hardly a success of Eagles proportion, No Fun Aloud — released May 28, 1982 — did go gold and spawned a pair of Top 40 hits, “The One You Love” and “I Found Somebody,” both penned with Tempchin. The track “Partytown,” meanwhile, was a rock-radio favorite.

“Later, on other albums, [Frey] focused more on what he wanted to do and was a little more serious,” Tempchin says. “But this was just him kicking back and saying, ‘I wanna do the fun stuff.'”

Listen to Glenn Frey’s ‘I Found Somebody’

Jim Ed Norman, an Eagles cohort since 1973’s Desperado and coproducer of No Fun Aloud, adds that “I never felt this was an effort at separating himself from the Eagles. Glenn had a very serious artistic soul and heart, and it was in full view on Eagles records. While he was exacting in his musical efforts, he also had a fun-loving side to his personality, and I do think this record was an opportunity to explore that.”

Tempchin unwittingly helped plant the seeds for No Fun Aloud when he visited Eagles’ three-night stand in July 1980 at the Santa Monica Civic Auditorium. A friend of Frey’s since before Eagles formed, he came with a tape that included “I Volunteer,” a song inspired by Ray Charles’ “You Don’t Know Me” that Tempchin wrote with Bill Bodine and subsequently demoed.

“Later [Frey] said, yeah, he wanted to record it,” Tempchin recalls. And as Frey began to hone in on the idea of a solo album in 1981, he invited Tempchin to come for a songwriting session at his house — an A-frame where actor James Cagney once resided, according to the writer.

“I went in, and Glenn had these two bottles of red wine and 100 candles lit, all over the room,” Tempchin remembers. “I said, ‘Well, I don’t drink wine’ and he said, ‘No, this is songwriter wine. We have to drink some of this.’ And all the candles, I said, ‘Do you have a date later?’ He said, ‘No, Jack. The muse is up there,’ and he pointed up, ‘and there’s a lot of people writing songs tonight. We want her to come down here and hang out with us, so I lit all these candles.'” The payoff was the two singles, “I Found Somebody” and “The One You Love,” the latter inspired by Tempchin’s study of jazz guitarist Mickey Baker’s work.

“I’d been studying these chords he used and they wouldn’t get in my head, so I used some of them to write that song,” Tempchin says. “I played it for Glenn, and we started fooling with those chords, which he picked up instantly.”

Off to a good start, Frey began accumulating more material: “She Can’t Let Go” and “Don’t Give Up” with Tempchin, “That Girl” with longtime friend and Eagles’ “Heartache Tonight” cowriter Bob Seger, “All Those Lies” by himself and a cover of Huey “Piano” Smith and His Clowns’ “Sea Cruise.” He, Norman and engineer Allan Blazek set up shop primarily at Wilder Bros. Studios on Santa Monica Blvd., spending several months working with a variety of players that included guitarists Danny Kortchmar and Wayne Perkins, keyboardist David “Hawk” Wolinski, bassists Bob Glaub and David Hood, saxophonists Al Garth, Ernie Watts and Jim Horn, and backing vocalists that included Bill Champlin, Marcy Levy and the Waters.

Listen to Glenn Frey’s ‘The One You Love’

The gang choruses on “Partytown,” meanwhile, were sung by a collective of friends dubbed the Monstertones. Tempchin, who was there “for every joint and every beer,” according to the album credits, says the No Fun Aloud sessions “went on for many months, but it was just a great experience — great players, fun people. [Frey] was relaxed and having fun, ’cause he was in control. He was producing and doing it all, which was much more comfortable for him.”

Norman, who also wrote string arrangements for “The One You Love” and “That Girl” and a horn arrangement for “I’ve Been Born Again” (and was the orchestra conductor and arranger for Eagles’ full-album Hotel California tour) adds that, “The album was full of wonderful performances by extraordinary and legendary musicians. The sessions were serious but also inspired by Glenn’s humor and enthusiasm for the project. There was a sense that everyone was thrilled to be there and excited to participate in the process of making sure each song realized Glenn’s vision for the album.”

No Fun Aloud preceded Eagles bandmate Don Henley‘s first solo album, I Can’t Stand Still, by three months, while Eagles Greatest Hits Volume 2 came out in November 1982. It was the first of five solo studio albums for Frey, preceding even greater success with soundtrack singles such as “The Heat Is On” from Beverly Hills Cop and “You Belong to the City” and “Smuggler’s Blues” for Miami Vice. He reunited with Eagles in 1994, releasing one more album with the band (2007’s Long Road out of Eden) and one more solo set (2012’s After Hours) before his death in 2016 at age 67.