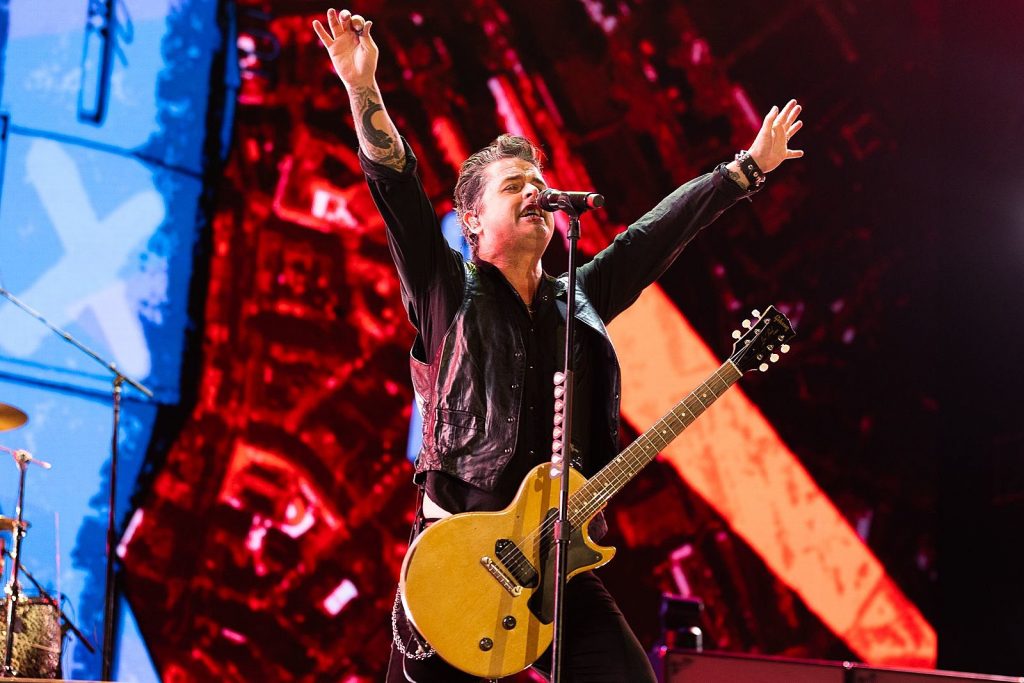 The Bay Area pop-punk stalwarts have been stuck in pop-culture purgatory for the past decade. They still have enough cachet to score Top 10 albums (with 2016’s Revolution Radio even debuting at No. 1 in the U.S.), but their days of racking up multiplatinum LPs and Hot 100 hits are long behind them. Ask a casual fan what Green Day has been up to for the past 15 years, and you’ll probably get a vague reference to 2004’s American Idiot, which is now old enough to buy cigarettes, or possibly its bloated 2009 sequel, 21st Century Breakdown.

Green Day not only came to terms with their legacy-act status but embraced it with sweaty arms pointed skyward during their performance at Austin’s Circuit of the Americas on Oct. 21, kicking off a star-studded Formula One race weekend. The final show of the band’s two-year globe-trotting campaign — first, the Hella Mega stadium jaunt featuring Fall Out Boy and Weezer, capped by a victory lap of headlining festival slots — featured no songs newer than 2009; 2020’s Father of All Motherfuckers, which they would ostensibly be promoting on this tour cycle, received nary a mention.

That suited the roughly 100,000 fans in attendance just fine. They were much happier to hear Green Day plow through disaffected slacker anthems like “Longview” and “Basket Case” off 1994’s star-making, diamond-selling Dookie and revel in the righteous rage and unadulterated angst of political punk juggernauts like “American Idiot,” “Boulevard of Broken Dreams,” “St. Jimmy” and “Know Your Enemy.”

Those are not easy feelings to bottle and uncork on command every night for more than a quarter-century, but Green Day pulled it off with aplomb during their breathless, hour-and-45-minute Austin set. Don’t let Billie Joe Armstrong’s graying hair fool you: His nasally, faux-British sneer and husky, troop-marshaling bellow still pack all the tuneful ferocity of yesteryear, while bassist Mike Dirnt and drummer Tre Cool still kick up a precise, whiplash-inducing wallop that’s equally indebted to the Ramones and the Who. Augmented by touring guitarists Jason White and Kevin Preston and keyboardist and saxophonist Jason Freese, Green Day delivered a multilayered stadium-rock spectacle that still rocked with the nervy, youthful abandon of their 924 Gilman St. days.

Time has not dulled Armstrong’s irreverent sense of humor or prickly anti-authoritarian streak either. “This is our last show for a long time. We saved our best for the best state in the United States: Texas!” he announced early in the night. “I’m not just gonna kiss your ass, but Texas is the greatest state in the whole damn world.” He waited for a beat for the applause to subside, and then, “Just ask Ted Cruz.”

Armstrong is both self-aware and self-deprecating enough to understand the irony of pillorying Republican politicians and mocking “the hype machine, the pageantry” of a gazillion-dollar sporting event even as Green Day performs in the center of the blood-red state and serves as a cog in the said hype machine. (His tongue was so firmly rooted in his cheek during his late-set exhortation to “get all these Californians out of this goddamn city” that you couldn’t even fault him for the shameless pandering.) He is also aware that the band’s Bush-era protest anthems and wastoid methamphetamine dirges lack the urgency they had upon release. But for many of the fresh-faced fans smushed against the barricade, these songs may still be actively soundtracking their personal and political awakenings. Armstrong, now 50, was happy to play master of ceremonies — sprinting and leaping across the stage, illuminating the crowd with a handheld spotlight during “Holiday” and donning a fan’s cowboy hat during a Texas-sized rendition of “St. Jimmy” — and steward his band’s legacy for the next generation of disenchanted outcasts.

It wasn’t all that deep, though. Green Day also reminded listeners just how damn fun their songs are, especially the more minor entries in their catalog, which are unencumbered by political sermonizing or theatrical grandstanding. Armstrong indulged in an extended harmonica solo on “Minority,” the rootsy, Kinks-y single off 2000’s underrated Warning, delivered a bug-eyed and slurred rendition of the caustic Insomniac single “Brain Stew” and turned Nimrod‘s “King for a Day” into a ska-glam revue, segueing as usual into a cover of the Isley Brothers’ “Shout.” Even a perfunctory cover of Kiss‘ “Rock and Roll All Nite” succeeded thanks to a spirited crowd singalong and a searing guitar solo from Armstrong.

If Green Day occupies a commercial gray area nowadays, they also proved at this show that they’re still the stadium-rock band to beat in 2022. They’re one of the few rock acts — along with fellow ’90s alt-rock heroes Foo Fighters — with a big enough treasure chest of hits to pack such massive venues and still limber enough to evoke their hit-making glory days without being graded on the AARP-discount curve. The Hot Topic brigade may balk, but 30 years into their career, Green Day fits all the criteria for a classic rock band — and they might just be the very best of the bunch.