Hall and Oates Hit No. 1 With ‘Maneater’ 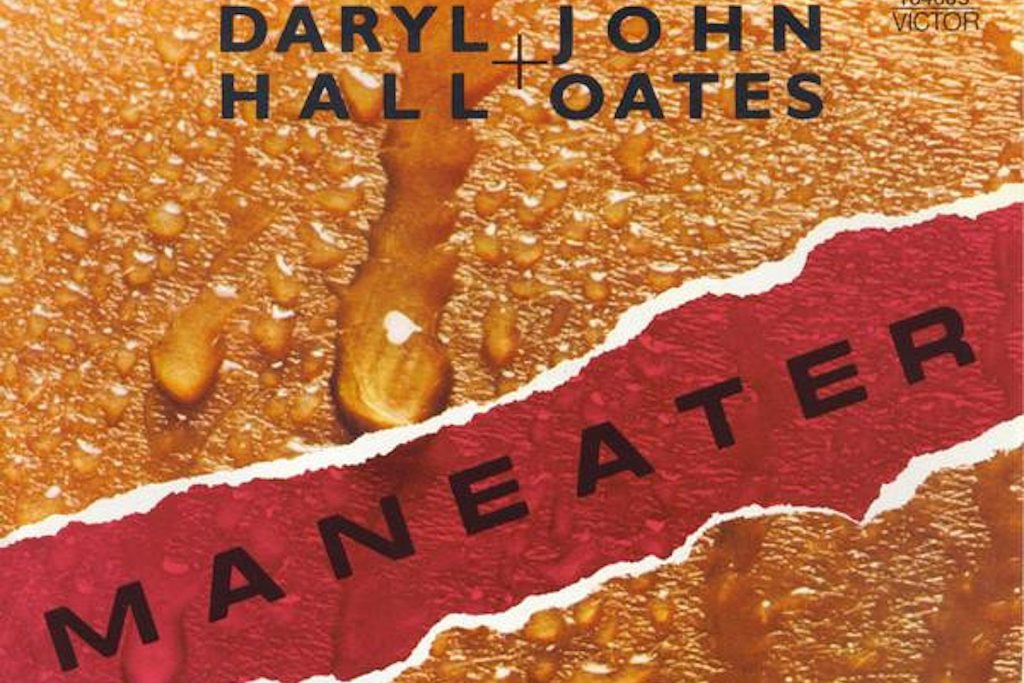 The first thing to know about Hall & Oates‘ “Maneater” is that it’s not about what you think.

On its surface, the 1982 hit would appear to be about a woman of grave consequence, “the lean and hungry type” who won’t hesitate to upend a man’s life in one fell swoop.

But like a number of Hall & Oates songs, “Maneater” isn’t meant to be taken so literally. There’s another fearsome character that could just as easily rip one’s world apart: New York City, in the ’80s particularly.

“It’s about greed, avarice and spoiled riches,” John Oates explained in 2014. “But we have it in the setting of a girl because it’s more relatable. It’s something that people can understand.”

Though born in New York City, Oates grew up in a suburb of Philadelphia, the city in which he and Daryl Hall met and launched their career. But after their first album, 1972’s Whole Oats, didn’t produce the success they’d hoped for, the duo made the decision to move up the coast to New York and try their hand at working there. A melting pot of styles and genres, New York proved a tough musical environment to break into, especially for an act that hadn’t fully settled on the sound they wanted to achieve. They eventually landed a couple of Top 10 hits toward the middle of the decade —”Sara Smile” and “Rich Girl” among them — but the duo still struggled to maintain steady radio play.

The ’80s begged for a different approach. One way for Hall & Oates to do this was by making the switch to producing their own albums — a critical step if they wanted to find their niche. Another involved employing new session musicians, whom they hoped could help bring their vision to life, like guitarist G.E. Smith, who would later become a bandleader for the Saturday Night Live house band, as well as the initial lead guitarist in Bob Dylan‘s Never Ending Tour band, among various other prestigious projects.

But at tail end of the ’70s, Smith was simply a musician hailing from Pennsylvania, something he had in common with Hall & Oates. Through mutual friends, Smith was recommended to the duo, but when he arrived at Hall’s West Village apartment for an audition, the pair discussed everything but Smith’s technical capabilities — their in vogue clothing, their similar backgrounds and shared love of Motown records. “The guitar never came out of the case,” Smith recalled in 2016. He got the job.

There was also drummer Mickey Curry, who had made a good impression on Hall & Oates’ manager, Tommy Mottola, after he had done a recording session at New York’s Electric Lady Studios. Mottola approached Curry directly and asked if he’d like to leave his drums set up and come ready to record with Hall & Oates the following week. (Curry and Smith were, ironically, former bandmates, having both played in a group called the Scratch Band in the New Haven, Conn. area.) Fortunately, Curry already knew all about Hall & Oates.

“I was a huge fan because [drummer] Bernard Purdie played on their [1973] album Abandoned Luncheonette,” Curry later recalled to Modern Drummer. “He’s on ‘She’s Gone,’ one of my favorites. So I said, ‘Yeah, I’d love to.'”

The rest of the studio band was rounded out with Tom “T-Bone” Wolk on bass, another former bandmate of Smith’s, and saxophonist Charles DeChant.

The scene was set on the inside, but meanwhile, outside on the streets of New York City, life was only getting tougher. Safe, clean and welcoming were not words often used to describe the largest city in America in the ’80s, which struggled under the weight of a skyrocketing crime rate and a crippling drug epidemic. Making it in New York – musician or not – was nothing short of a challenge. “Maneater” attempted to express this uphill battle: “the beauty is there, but a beast is in the heart.”

“What we have always tried to do,” Oates later explained, “and if we have any kind of philosophy for our lyrics over the years, it was to try to take a universal subject and somehow make it seem personal so that people could relate to it as if it was a personal thing.”

Hall & Oates did this by personifying New York City as a lush but dangerous woman, though it took a while for the song to fully emerge. Oates had been workshopping it with Edgar Winter, trying it out as a semi-reggae number.

Hall had another idea. “I said, ‘Well, the chords are interesting, but I think we should change the groove,’ I changed it to that Motown kind of groove,” he later recalled to American Songwriter. He then showed it to his girlfriend, Sara Allen, the namesake of Hall & Oates’ “Sara Smile.”

“I played it for Sara,” Hall said, “and sang it for her…[Sings] ‘Oh here she comes / Watch out boy she’ll chew you up / Oh here she comes / She’s a maneater…and a …‘ I forget what the last line was. She said, ‘Drop that shit in the end and go, ‘She’s a maneater,’ and stop! And I said, ‘No, you’re crazy, that’s messed up.’ Then I thought about it, and I realized she was right. And it made all the difference in the song.” (Allen wound up receiving an official co-writing credit on the track.)

Hall assuming lead vocals on the track was something that, as Oates later described, “happened naturally.” The duties had been split more evenly in their earlier days, but Oates was able to recognize Hall’s strength – and how it worked in their favor on the charts.

“At that point, if I was ruled by ego, I might have said, ‘OK, I don’t want to be involved in something like this’ and I would have left,” Oates explained to The Vinyl Dialogues Blog in 2017. “But I always accepted that Daryl was such an exceptional singer and such a unique talent that it didn’t really surprise me, to be honest with you, when his voice cut the way it cut through the radio. It has a quality. It’s a natural gift that he happens to have that I evidently don’t. So be it.”

Like many other artists of their era, Hall & Oates had little control over the music videos that accompanied their songs — that was often left to record company executives who were prone to pushing the shock value of videos, especially when tens of thousands of eyes were watching the newly launched MTV channel. The video for “Maneater” was created along those lines, with shots of a woman and a real life beast spliced in between footage of the band. “Somebody decided the ‘Maneater’ video wouldn’t be complete unless we had an actual panther, a man-eating animal, in the video,” Hall said for the 2011 book,

“Maneater” was an enormous success, reaching No. 1 on the Billboard Hot 100 on Dec. 18, 1982, a little over two months after it appeared on their H20 album. The song spent four weeks in the top spot, ultimately becoming the most successful single of the duo’s entire career. (H2O reached No. 3 on the Billboard 200 and is the band’s highest charting album to date.)

Decades down the line, in early 2007, “Maneater” made a few headlines again when Hall & Oates sued their own music publisher for not adequately protecting their rights to the song. The suit claimed that an unnamed musician used “Maneater” for a 2006 recording, but that Warner Chappell Music would not sue them for copyright infringement. The duo alleged that the publishing company “failed and refused to take action based upon a conflict of interest of its own making.”

“Maneater” reportedly served as inspiration for a 2006 song by Nelly Furtado, also titled “Maneater,” though a more likely culprit is “Dangerous” by the Ying Yang Twins, another 2006 recording that directly used Hall & Oates original melody and lyrics. A spokesperson for Warner Chappell said at the time: “We will defend ourselves vigorously.”

The song, ultimately, is one of the best examples of Hall & Oates enduring partnership — one that may sometimes need assistance from outside forces, but is indicative of creative collaboration at its best. “The point is,” Oates said in 2017, “we’ve really been sensitive to each other. We kind of inherently know what each person needs to keep this thing going and that’s why we’re still together.”