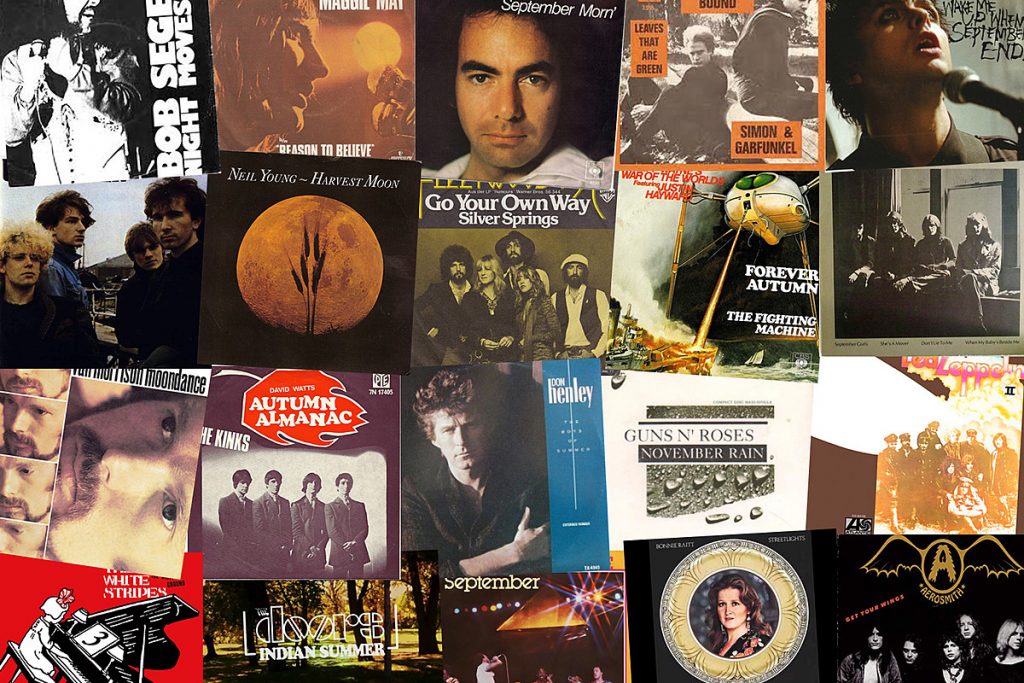 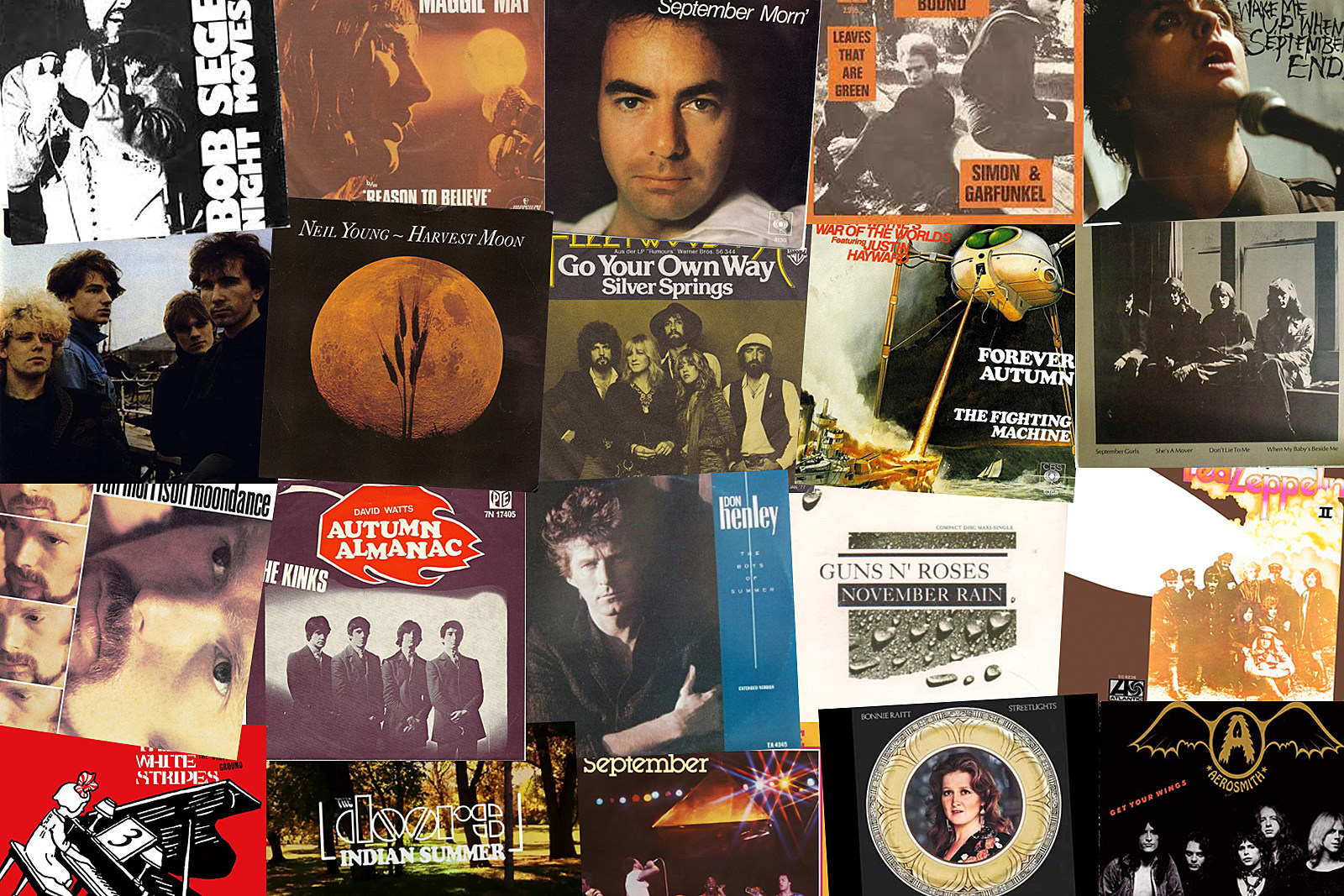 Fall: A chill in the air, long shadows across dying grass, the smell of wood smoke on the breeze. These days bring up moments of introspection. They also bring visions of songwriters reflecting on lost loves and broken hearts covered over with scar tissue and the writings of J.R.R. Tolkien.

There’s no perfect formula for a song about autumn, but they tend to come with a few touchstones: nostalgia, longing, acoustic-guitar picking and a deep melancholy just below the surface.

Here are 20 tunes to play as you sip a mug of Earl Grey by the fire or cue up The Fellowship of the Ring on your TV.

Meditative and endlessly sad, the whole Sounds of Silence album feels just right for fall. But no song on the LP directly addresses nature’s cycles like “Leaves That Are Green” with Paul Simon singing, “And the leaves that are green turn to brown/And they wither with the wind/And they crumble in your hand.” Sure, it’s about a lost love, but it’s also an anthem for lonely arborists.

Not everybody is a grump about the arrival of sweater weather. The characters in Ray Davies’ song look forward to weekends getting toasted, cleaning leaves, eating roast beef and watching football matches. A stand-alone single slotted between 1967’s Something Else by the Kinks and 1968’s The Kinks Are the Village Green Preservation Society, the tune bridges the aesthetic of both albums. Even Dave Davies likes it: “I was playing through ‘Autumn Almanac’ [recently] and it’s a phenomenal recording. You can understand why it has lasted so long,” he told Yahoo! in 2015.

“The leaves are falling all around, time I was on my way/Thanks to you, I’m much obliged for such a pleasant stay/But now it’s time for me to go, the autumn moon lights my way.” Be they about ladies Robert Plant met on the band’s first Stateside tour (when the song was recorded during a stop in New York in 1969) or Frodo’s trip to the Undying Lands, Plant’s lyrics embody the shift from summer to fall. The song rumbles like a late August storm (with John Bonham reportedly banging out the beat on a plastic garbage pail), but Jimmy Page’s acoustic strumming and electric lead evokes an early October winsomeness.

Morrison is a legendary curmudgeon, but he’s one of the few musical artists who finds love, joy and inspiration in the fall. A celebration of the season done with a direct and jazzy approach, the title track to Morrison’s 1970 LP connected with fans in a way that Astral Weeks didn’t in 1968 (it’s now regarded as a masterpiece). Everyone seemed to agree with Morrison that it’s “a fantabulous night to make romance/’Neath the cover of October skies/And all the leaves on the trees are falling/To the sound of the breezes that blow.”

Like “October,” this Doors track is an exercise in minimalism. Over Robby Krieger’s simple, very-hippie guitar part and some light drums, Jim Morrison spills a few words about love and meeting up with said love down the road. From the second side of 1970’s Morrison Hotel, it’s a pleasant but non-essential Doors track. That said, it’s probably a great soundtrack for a peyote trip.

Rod Stewart just can’t quit Maggie May. He’s missed weeks of classes just to be with the lover who’s his everything. Stewart said of his 1971 classic, his first chart topper in the U.S., that it was “more or less a true story about the first woman I had sex with.” Nothing he ever wrote felt as true, conflicted and nostalgic as this one. Bonus points for the autumnal mandolin strumming.

Like Don Henley’s signature solo track “The Boys of Summer,” this tune by Alex Chilton‘s cult band echoes the dreamy, wistful feeling that comes with cooler temperatures. Often called the definitive power-pop song, the 1974 gem is actually more than that. It’s like Laurel Canyon folk, Beach Boys pop, Beatles rock and AM gold all at once. For a nice twist on the tune, spin the Bangles‘ version from 1986’s Different Light.

Aerosmith pulled from plenty of sources to create their sound: the Stones, the Yardbirds, the J. Geils Band. But Zeppelin loom large on the early stuff. This is a good thing. Steven Tyler’s “Seasons of Wither,” off of 1974’s Get Your Wings, nods to the misty, magical vibes of “Ramble On” and “Over the Hills and Far Away.” But it’s also distinctly Tyler. Inspired by the New England winter, which runs from mid-October to mid-May most years, the song finds a space between a dark January ballad and blistering summer rock ‘n’ roll romp.

“Well, it looks like another fall/My friends they don’t help at all/And I’m feeling kind of cold and small,” Bonnie Raitt sings on this soul-rock gem. Like so many great Raitt tunes, “Rainy Day Man” balances sadness and hope, slow tempos and big energy. Even when she sings of “gray days,” there’s a warmth.

Is this Bob Seger masterwork about summer or fall? Yes, he says it was sweet summertime. And the story seems to follow kids hanging onto the end of August with everything they got. But the song, from Night Moves, which arrived in late October 1976, seems to be written about someone standing between the two seasons and looking back, wishing he could go back, “with autumn closing in.”

Rumours had so many perfect songs, “Silver Spring” didn’t even make the cut. Think about how astounding that is. If you are team Stevie Nicks, you have to wonder how Lindsey Buckingham couldn’t make it work with a songwriter who wrote “I would be your only dream/Your shining autumn ocean crashing” about him. Nicks seemed to get the last word in when her dazzling ballad became the standout on Fleetwood Mac’s live reunion record The Dance and landed a Grammy nomination for Best Pop Performance by a Duo or Group with Vocals in 1998.

This song feels like a sequel to “Ramble On” written by the Moody Blues. And it should. Hayward fronted the Moody Blues, but this song comes from a strange musical version of The War of the Worlds. Written by British jingle composer Jeff Wayne and soft-rock artists Gary Osborne and Paul Vigrass, the song came together in 1976 and hit the U.K. charts in 1978. Apparently Wayne wanted something on his War of the Worlds interpretation that sounded like “Nights in White Satin.” Mission accomplished.

Do you remember the 21st night of September? Well, Earth, Wind & Fire fans do. Band leader Maurice White, pro songwriter Allee Willis and guitarist Al McKay wrote this funk-disco-pop nugget in 1978. Since then, the song has gone everywhere: It’s been in movies, TV shows, commercials, video games and even got played in 2008 at both the Republican and Democratic national conventions. To quote White, “Ba-dee-ya! Ba-dee-ya!”

Neil Diamond digs deep in the syrupy stuff for the title track of his 13th album. Like something out of a blustery, overwrought Broadway musical, the song is pure gold if you’re a Diamond die-hard. It made it to only No. 17 on the Billboard Hot 100 but went to No. 2 on the Adult Contemporary charts in 1980.

One of U2’s most contemplative songs, the title track of the band’s 1981 album (which the quartet released in October) is almost an instrumental, as the Edge plays a beautiful but cheerless piano for the first half of the song. Then “October” blossoms only slightly when Bono sings just a few lines: “October and the trees are stripped bare/Of all they wear/What do I care?/October and kingdoms rise/And kingdoms fall/But you go on/And on.”

Written by Don Henley and Heartbreaker guitarist Mike Campbell, this ode to everything being over gets at that post-Labor Day malaise. Nobody’s on the beach, the lake is empty, the sun is going down alone and Henley knows it: “The summer’s out of reach.” You know what else is out of reach? Henley’s ex. A Deadhead sticker on a Cadillac tells him to to don’t look back, those days are gone forever – a sentiment evoked in the introspective Campbell guitar lines and the Eagles singer’s plaintive voice.

Axl Rose’s “Stairway to Heaven,” “Hotel California,” and “Bohemian Rhapsody” in nine minutes, this epic had been coming together in the back of the singer’s brain for years before it showed up on Use Your Illusion II. Sweeping, absurd, wild and glorious, the Homeric symphony-in-a-song came with a video that MTV played relentlessly in 1992. And why wouldn’t they? This video had it all: Stephanie Seymour, Riki Rachtman, Slash leaving a wedding to play a guitar solo in front of a church in New Mexico, Slash climbing on top a grand piano to play another guitar solo.

While Pegi and Neil Young eventually separated, the moment between the couple captured on “Harvest Moon” is exceedingly tender. A departure from the noise rock Young blasted out in the late ’80s and early ’90s, the 1992 hit reminded fans that Young can go from overdriven guitar to gentle folk ballad with remarkable grace. Bonus points for the amazing Linda Ronstadt harmony vocals. Want a whole album that’s right for fall? Both Neil Young’s Harvest and Harvest Moon will satisfy.

The White Stripes, “Dead Leaves and the Dirty Ground” (2001)

Is this Jack White tune about fall? Maybe. Does it sneer with the fury and thump of an October storm? Absolutely. Forget looking for the meaning of the song. When Jack and Meg White ripped into the opener of 2001’s White Blood Cells, millions of fans realized the duo could stand tall with any classic-rock act. Meaning didn’t matter, feel did, swagger did. And these two had swagger for days.

Green Day songs generally work best with sunshine, skateboards and political rage. But this one is intimate and personal. Billie Joe Armstrong reportedly named the song after the words he said to his mother after his father died in September 1982. Armstrong was 10 years old. Twenty-two years later, the song became a key part of the punk trio’s album American Idiot.