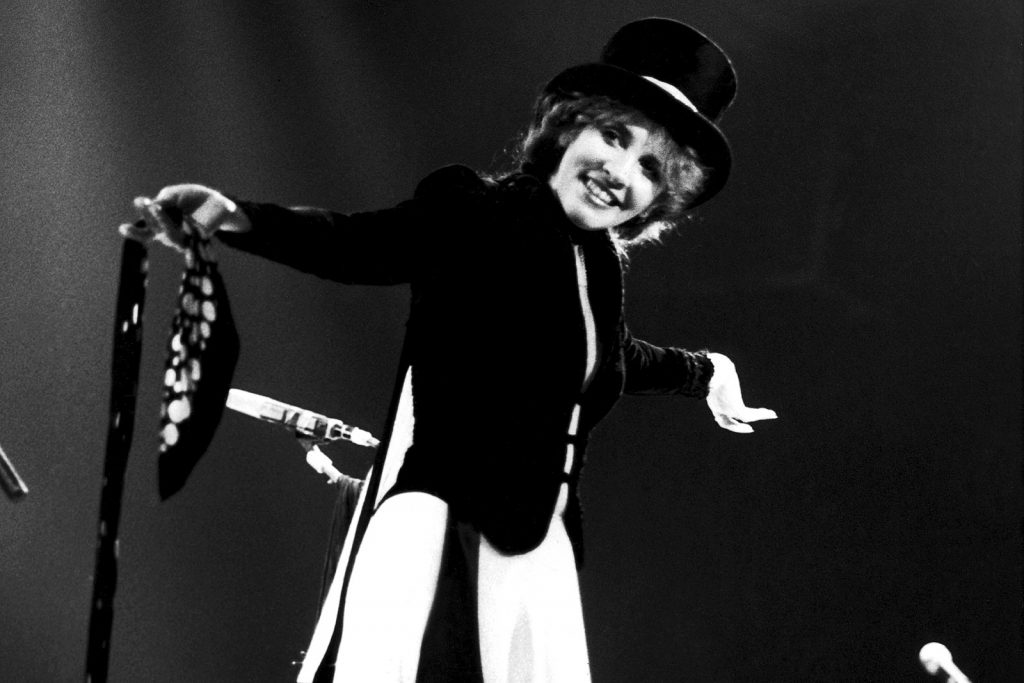 How prolific of a songwriter was Stevie Nicks in the ’70s and early ’80s? Not only did she pen multiple Fleetwood Mac hits – “Rhiannon,” “Dreams,” “Sara” and “Gypsy,” to name a few – but she also found time to write and record a hit solo album, 1981’s Bella Donna.

In addition to the songs that made the final album, Nicks and the musicians she worked with at the time also cut (or tried to cut) many other tunes. Some of this music surfaced soon after; others stayed hidden away for decades. And still others remain locked away, at least officially.

Below we run through 10 of the songs Stevie Nicks left off her debut solo LP Bella Donna and where you can find them.

You can hear why “Blue Lamp” didn’t end up on Bella Donna: The song has a darker, rock-oriented vibe that’s quite different from the rest of the album. However, it’s one of Nicks’ finest solo songs, based on a “dark blue Tiffany lamp” from her mom that “symbolized to me the light that shines through the night,” as she told The Source in 1981. “When Fleetwood Mac – we found them or they found us or whatever you know – it was a definite light at the end of the tunnel for both Lindsey [Buckingham] and I.” However, Nicks also saw the song represent new beginnings in her solo career. “It was very important that it found a place for itself,” she told BAM in 1981. “I love that song. It was really the beginning of Bella Donna, because it was the first thing I’d ever recorded with other musicians, and it was the first time I’d ever recorded by standing in a room singing at the same time that five guys were playing. Fleetwood Mac doesn’t record that way. They record from a more technical standpoint.”

It seemed inevitable Nicks would have had a song on the Fast Times at Ridgemont High soundtrack – after all, her manager, Irving Azoff, coproduced the movie. However, “Sleeping Angel” was certainly no tossed-off leftover; in fact, it’s one of Nicks’ most gorgeous and emotional songs from the era. Driven by elegiac piano from Roy Bittan and lush backing vocals from Lori Perry and Sharon Celani, Nicks defines the respect she needs in and from a relationship: “I need you because you let me breathe / Well, you’ve taken me away / But never take me lightly / Or I could never stay.”

“Gypsy”
Later appeared: Fleetwood Mac, Mirage (1982)
Incredibly enough, Fleetwood Mac’s Mirage hit “Gypsy” was initially a Nicks solo song. In fact, she recorded a brisk, rock version of the song with members of Tom Petty and the Heartbreakers. Former Heartbreakers drummer Stan Lynch told UCR he understood why “Gypsy” worked better as a Fleetwood Mac song. “I heard that song on [Mirage], a song that [Lindsey Buckingham] had produced that we had tried to cut,” he said. “It had the full Lindsey Buckingham treatment with the cool … it might have been a loop, and then Mick [Fleetwood] probably overdubbed some amazing fills on it. I realized what a remarkable sculptor Lindsey Buckingham is. I just went, ‘Oh, right. Okay. Shit, that’s how he saw the song.’ You know, you don’t just go in there and pound your brains out, and hope for the best.”

Incredibly enough, Nicks never actually recorded “Gold and Braid” in the studio, although she played it live on early ’80s solo tours. In concert, it’s a barn-burning rocker that serves as a perfect contrast to Bella Donna‘s folkier songs and hints at what it might have sounded like had Nicks followed through on her desire to join Tom Petty and the Heartbreakers.

Nicks’ original demo for “24 Karat Gold” is piano-heavy and meditative, with almost stream-of-conscious vocals. The version that surfaced later on 24 Karat Gold maintains the bones of her demo, the piano especially, but turns into a compact cautionary tale about ill-fated fame and love.

“‘Belle Fleur’ was about not being able to have a relationship because you were a rock ‘n’ roll star,” she told Maclean’s in 2015. Fittingly, one demo for the song is just piano and voice, featuring Nicks and her backing singers – a sisterhood of support that’s always been a through-line in Nicks’ work. “The [lyric] ‘When you come to the door of the long black car‘ – that’s the limousine that’s coming to take you away. Then your boyfriend is standing on the porch waving at you, like, ‘When are you going to be back?’ And you’re like, ‘I don’t know, maybe three months?’ But then we would add shows to a tour, and I could end up not being back for six months. It was difficult for the men in my life. I lived that song so many times.”

“The Dealer”
Later appeared: Stevie Nicks, 24 Karat Gold: Songs From the Vault
(2014)
“The Dealer” had been hanging around since the Tusk sessions, but in the Bella Donna-era take exuded Heartbreakers cool. The final version of the song on 24 Karat Gold: Songs From the Vault was slightly more weary – a fitting tone for the resigned vibe of the lyrics.

“Starshine”
Later appeared: Stevie Nicks, 24 Karat Gold: Songs From the Vault
(2014)
During a solo concert, Nicks said she wrote this song in Tom Petty’s basement in 1980 or so and recorded it with the Heartbreakers. “It came out so amazing that if either of us were doing a record, it would have gone on one of those records, but neither of us were doing a record,” she said. “So, the song went into the dark trunk of songs possibly never to be heard from again, until 2014 when I made 24 Karat Gold.” Why it stayed locked away for so long is a mystery; it’s a shimmering pop-rock song with a stomping beat and upbeat lyrics.

“If You Were My Love”
Later appeared: Stevie Nicks, 24 Karat Gold: Songs From the Vault
(2014)
According to a review from MLive posted on Nicks’ official website, her record company meddled with “If You Were My Love” after she recorded the demo in 1980. “This song should have been on Bella Donna, but I didn’t like the way it was done,” she said. The version on 24 Karat Gold: Songs From the Vault is “exactly the way she originally recorded it,” the site noted. Nicks spent subsequent decades trying to make the song work, workshopping it with Fleetwood Mac and even tracking it for 1993’s Street Angel. Going by the subject matter – it’s about her initial time working with Tom Petty and the Heartbreakers – it’s clear why she wanted to get it just right. “It’s like a love song, but it’s not,” she told the Chicago Tribune in September 1981. “It’s about going outside your own life and getting attached to something that isn’t yours. It’s been kind of like falling in love with another band — for a minute. It has nothing to do with — and truly, clarify this — there is absolutely nothing going on between me and anybody in that band. They’re all married. They’re all expecting babies. That’s what makes it very easy for me to be with them and be their friend, and almost be one of the guys.”