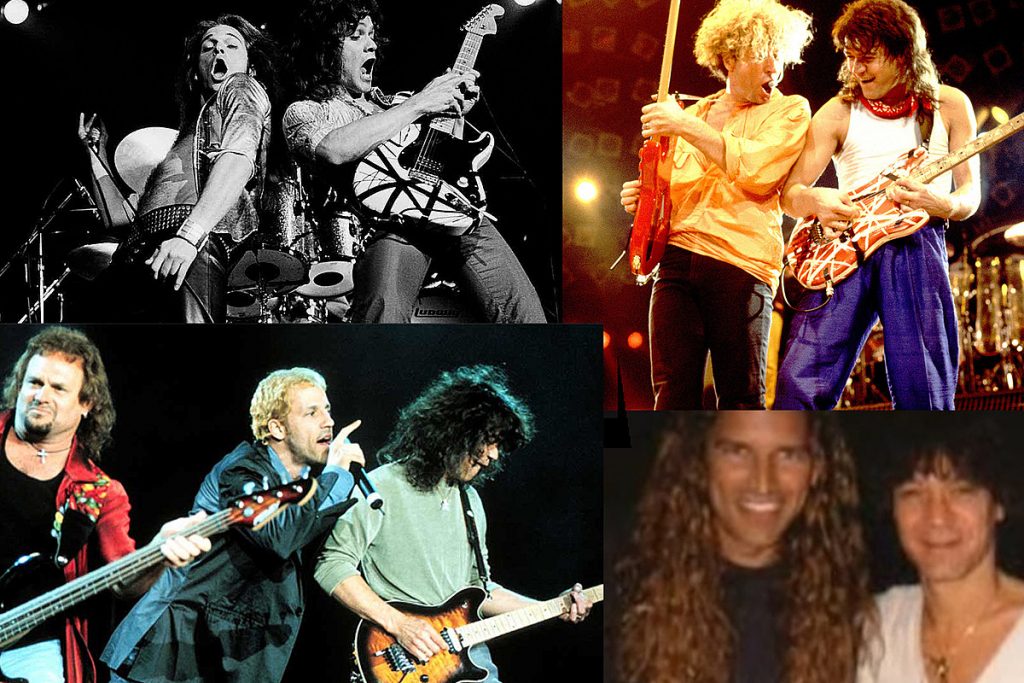 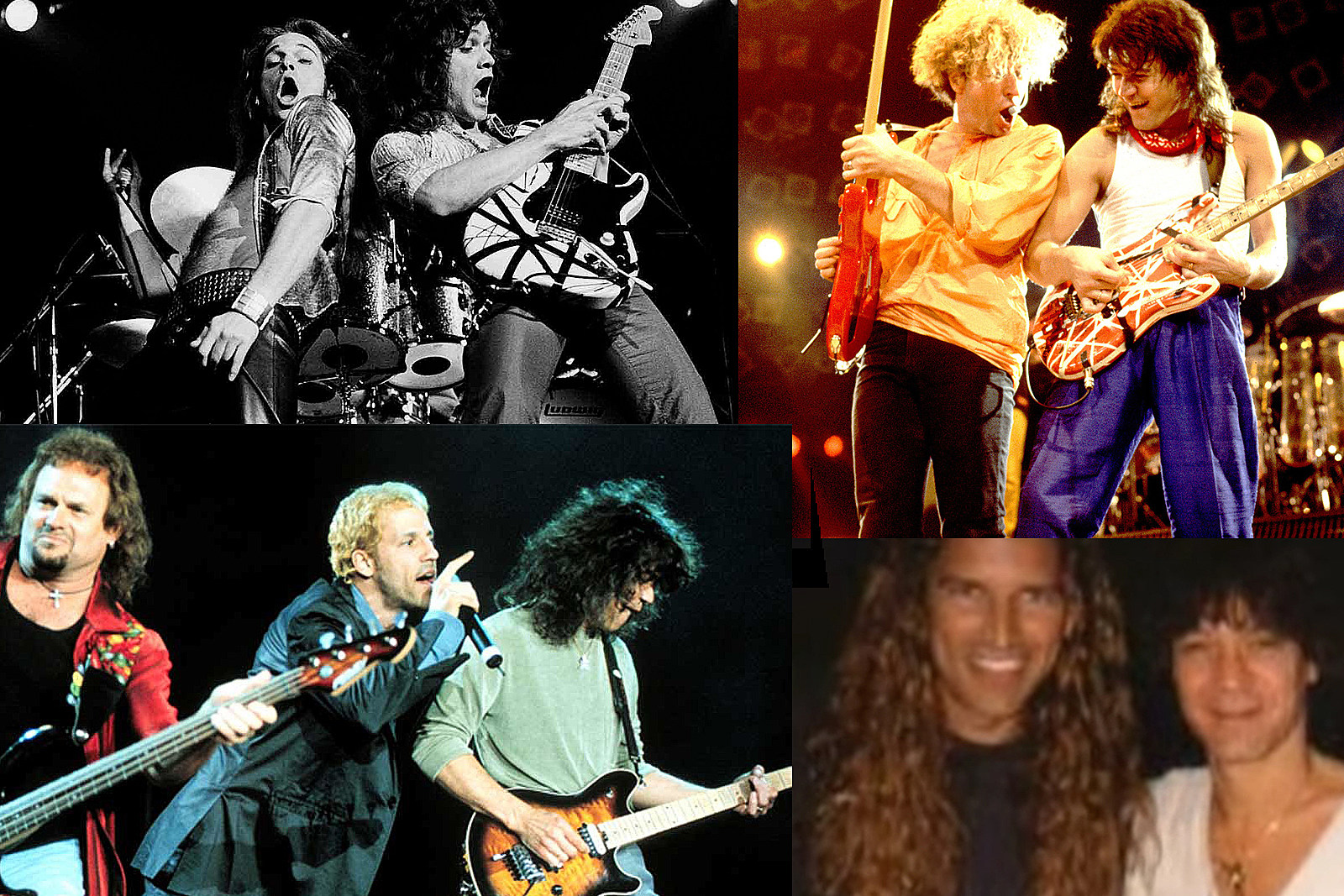 There are more than two albums’ worth of unreleased Van Halen songs waiting to be heard on YouTube.

Below, we chronologically break down 25 demos and live cuts that never found their way to one of the group’s 12 studio albums. We also include information about an additional 16 tracks that have never been bootlegged. And we conclude by rounding up the seven previously unreleased tracks that were reworked to varying degrees on the band’s 2012 album A Different Kind of Truth.

“Gentleman of Leisure” (1973)
“Glitter” (1973)
Van Halen recorded their first demos of original material in the fall of 1973 at David Lee Roth‘s family house. According to the book Van Halen Rising, only three-quarters of the band’s classic lineup was featured in this five-piece group. Michael Anthony had yet to replace Mark Stone on bass, and keyboardist Jim Pewsey was still an active member of the band. In 1998, Roth shared these demos on his website as part of his Dave TV series.

“Angel Eyes” (1974)
“Believe Me” (1974)
With Pewsey gone and Stone about to be shown the door because of his refusal to sing background vocals, Van Halen were offered an opportunity to record at Hollywood’s Cherokee Studios. In addition to early versions of future Women and Children First cuts “Take Your Whiskey Home” and “In a Simple Rhyme,” the band recorded two tracks that have never appeared on an album. “Angel Eyes,” featuring Roth on acoustic guitar, was reportedly considered for inclusion on 1979’s Van Halen II. Ultimately it was decided that the gentle ballad didn’t fit alongside the rest of the album’s songs.

“Woman in Love” (1976)
“Babe, Don’t Leave Me Alone” (1976)
At the height of his fame in Kiss, Gene Simmons offered to help Van Halen find a record deal, a process that included making a new demo. Four of the 10 songs that have leaked from the sessions wound up on the band’s first six studio albums: “On Fire,” “Runnin’ With the Devil,” “Somebody Get Me a Doctor” and “House of Pain”; “She’s the Woman,” “Let’s Get Rockin’,” “Big Trouble” and “Put Out the Lights” were reworked decades later for inclusion on A Different Kind of Truth. A pair of others have never seen proper release, including “Woman in Love,” which has no musical relation to Van Halen II‘s similarly titled “Women in Love … “

Van Halen were prolific in their early days, regularly debuting new songs at their club shows and often abandoning them just as quickly. According to The Van Halen Encyclopedia, the woman who inspired “Honolulu Baby” was actually from Waikiki – but Roth couldn’t think of lyrics that rhymed with that city’s name.

Unable to find a record deal for Van Halen, and reportedly under pressure from his Kiss bandmates to focus on his own group, Simmons bowed out of the picture by tearing up the management contract between the two parties. Not too long after, Van Morrison and Doobie Brothers producer Ted Templeman was tipped off to the band, went to see them perform and instantly set about getting them a deal at Warner Bros. He cut a 25-song demo with the group that included new versions of every track they had recorded with Simmons, except for “Woman in Love.” Most of the songs eventually found their way onto Van Halen albums, including the four tracks reworked for A Different Kind of Truth. But “We Die Bold,” “I Wanna Be Your Lover,” “Piece of Mind” and “Light in the Sky” (not to be confused with Van Halen II‘s “Light Up the Sky”) remain unreleased. So does the band’s version of the Kim Fowley- and Steven Tetsch-penned “Young and Wild,” which was later recorded by Cherie Currie. It took a couple of minor modifications for “Bring on the Girls” to become Van Halen II‘s “Beautiful Girls,” so we’re not including that one. Three other tracks from the Templeman sessions seem at least partially familiar to fans but have varying degrees of differences: “Get the Show on the Road” features half of “Romeo Delight”‘s chorus; “Voodoo Queen” shares its main riff – but not much else – with “Mean Street,” and also features the coda eventually used on “Hot for Teacher”; and “Last Night” is a nearly complete version of Diver Down‘s “Hang ‘Em High” but with a different chorus and lyrics. Anthony and Roth also recorded a short, druggy parody of Nicolette Larson’s “Lotta Love” as an inside joke for Templeman.

As live bootlegs of these four songs prove, not even a 25-song demo was big enough to include all of the songs in Van Halen’s 1977 repertoire.  The guitar intro of “No More Waiting” resurfaced in 1995 on Balance‘s “Take Me Back (Deja Vu),” but otherwise there’s no record of these tracks ever being recorded in a studio. Another song from the band’s live shows around this time, “Down in Flames,” had its opening swiped for their cover of “You’re No Good.” The song’s main riff and basic arrangement was also used for A Different Kind of Truth‘s “Tattoo.”

After using the majority of the songs from its club days on Van Halen and Van Halen II, the band was eager to explore more sophisticated and experimental material on 1980’s Women and Children First. This unreleased instrumental demo is anchored by a thumping Michael Anthony bass line.

Audio has yet to surface on these two tracks. The Van Halen Encyclopedia lists “Any Time, Any Place” as an unreleased song from the 1984 album sessions, while “Eat Thy Neighbor” comes from Van Halen’s aborted attempt to record a seventh album with Roth before he left the band. It’s also rumored there’s a version of 5150‘s “Summer Nights” featuring Roth on vocals in the vaults. An unverified label memo discussing 1984 also lists the songs “Baritone Slide,” “Lie to You,” and “Ripley” as being “in the can.”

This song may not have earned a spot on Van Halen’s first album with Sammy Hagar, but Eddie Van Halen didn’t give up on it so easily. Elements turned up during the guitarist’s 1987 performance of the new instrumental track ‘Stompin’ 8H” on Saturday Night Live. Two years later Eddie handed over the song to Steve Lukather and even played bass on “Twist the Knife” from the Toto guitarist’s debut solo album. Nearly a decade later, a similar riff turned up on Van Halen III‘s “Dirty Water Dog“

The first two of these unheard outtakes from 1991’s For Unlawful Carnal Knowledge featured “She Blinded Me With Science” hit maker Thomas Dolby assisting on keyboards. In return, Eddie Van Halen appeared on two songs from Dolby’s 1992 album Astronauts & Heretics. It was eventually decided that “You Never Know” and “The Wish” didn’t fit in with the back-to-basics approach of the rest of the Van Halen album. “Out of the Ether” was reportedly also considered for inclusion on the band’s next album, Balance, with the working title of “Hendrix Jam”

According to The Van Halen Encyclopedia, four unreleased songs emerged from the sessions for Balance, the band’s tumultuous final album with Hagar. When the group reunited with Roth for two new songs in 1996, “Backdoor Shuffle” was reworked as “Can’t Get This Stuff No More,” which annoyed Hagar. “They totally stole the melody in the chorus from my original,” he later said. “I just made one phone call, and Ray Danniels overnighted me a check for $35,000, saying he was sorry. These guys don’t have any class anymore.”

In between Hagar’s departure and Roth’s brief return to Van Halen, singer Mitch Malloy was reportedly offered the chance to be Van Halen’s third singer. He said he turned it down because “it was clear to me that something was amiss,” but not before he recorded at least one leaked song, “It’s the Right Time.”

“That’s Why I Love You” was a last-minute scratch from Van Halen’s first and only album with singer Gary Cherone, even appearing on early test pressing versions of the record. According to The Van Halen Encyclopedia, the group also attempted to record the song during its brief reunion with Roth in 1996. The book also lists three other tracks recorded during the Van Halen III sessions that have never leaked: “Blood From a Rock, “It’s Not Over ’til It’s Over” and “Why? Because Why.”

On May 19, 1999, Van Halen’s website reported that the band had written more than 20 new songs for the follow-up to Van Halen III. Seven tracks were reportedly recorded as demos. Four titles were included in the story, but none has ever been bootlegged in any form. Another report on the sessions offered four more unconfirmed song titles: “More Than Yesterday,” “I Don’t Miss You … Much,” “Love Devine” and “From Here, Where Do We Go?”

Van Halen reunited with Roth for their first new studio album together in almost three decades, raiding their vaults for 2012’s A Different Kind of Truth. Six previously unreleased songs from the Simmons and Templeman demos were dusted off for the project. The 1983 instrumental “Ripley” was reborn as “Blood and Fire,” with Roth adding new lyrics about the band’s history and early struggles. The singer also rewrote almost all t he lyrics on the seven repurposed tracks, resulting in five of them getting new titles. Eddie Van Halen’s son Wolfgang took over for Anthony on bass, and it’s his enthusiasm that’s widely credited with pulling the band out of semi-retirement. He also came up with a new breakdown for “She’s the Woman,” since the original one was used on Fair Warning‘s “Mean Street.” Some songs, such as “Bullethead,” emerged from the rewrites mostly unchanged; others underwent more significant modifications, most notably “Down in Flames,” which became the album’s lead single, “Tattoo.”