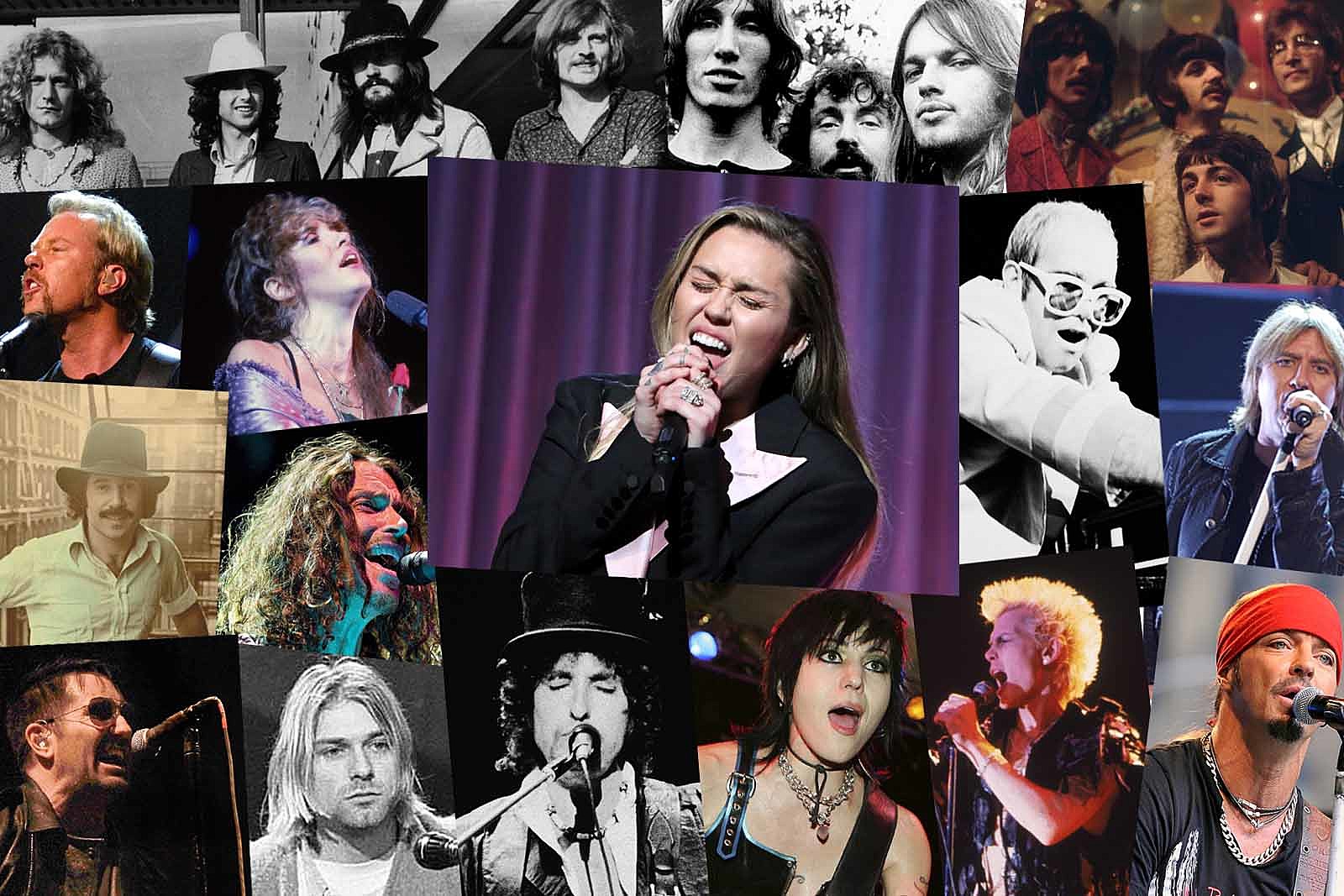 Miley Cyrus has proven herself to be adept at covering classic rock songs throughout her career. We outline 24 of the best below.

Most of the videos you’ll see come from live performances – sometimes her own shows and others when she’s sitting in with friends, including some high-profile TV appearances. But there are also a handful of times where Cyrus recorded classic songs in the studio. Hear how she’s interpreted songs by such diverse artists as the Beatles, Metallica, Fleetwood Mac, Joan Jett, Led Zeppelin, Pink Floyd and more below.

At the 2019 iHeartRadio Festival in Las Vegas, Cyrus devoted half of her eight-song set to works by other artists. The third number was a take on “Black Dog,” the opening cut from Led Zeppelin’s untitled fourth LP. She performed it on two other occasions that year, including the prestigious Glastonbury Festival in England, where she worked the Zep classic into her own “Mother’s Daughter.”

Toward the end of her iHeartRadio slot, Cyrus broke out Pink Floyd’s “Comfortably Numb.” She introduced the song by noting she sings some songs – like the one that preceded “Numb” in her set, the No. 2 hit “We Can’t Stop” – for her fans, but others, like the covers, she does for herself.

Def Leppard, “Pour Some Sugar on Me”

During her 2011 Gypsy Heart world tour, Cyrus added Fleetwood Mac’s “Landslide” to her sets. Stevie Nicks wrote the song while visiting friends in Aspen, Colo., after Buckingham Nicks flopped and she was considering giving up her music career. The tune convinced her into giving it another six months and, three months later, she and Lindsay Buckingham were given the opportunity to join Fleetwood Mac.

Bob Dylan, “You’re Gonna Make Me Lonesome When You Go”

Cyrus was among 73 artists who contributed to the 2012 four-disc Chimes of Freedom: Songs of Bob Dylan Honoring 50 Years of Amnesty International, which raised funds for the human-rights organization. She teamed up with Johnzo West, the lead guitarist for Eric Burdon and the Animals, to record a plaintive version of “You’re Gonna Make Me Lonesome When You Go,” originally found on Dylan’s 1975 masterpiece Blood on the Tracks.

The Beatles, “Lucy in the Sky With Diamonds”

In 2014, Cyrus helped out the Flaming Lips on their track-by-track remake of the Beatles’ Sgt. Pepper’s Lonely Hearts Club Band. Frontman Wayne Coyne leaked the news by posting pictures of the two of them hanging out in the studio, including one of Cyrus rolling a joint. Their recording of “Lucy in the Sky With Diamonds” also features contributions by electronic artist Moby.

The Beatles, “A Day in the Life”

Cyrus’ second vocal on the Flaming Lips’ Sgt. Pepper’s remake was her recreation of Paul McCartney‘s middle section on the album closer “A Day in the Life.” The record was a benefit for the Bella Foundation, an Oklahoma City-based organization that helps low-income, elderly and terminally ill pet owners with their veterinarian bills.

Metallica, “Nothing Else Matters”

Cyrus’ Glastonbury set included an interpretation of the Metallica Black Album single “Nothing Else Matters.” Five years earlier, Metallica’s performance at the festival caused controversy due to James Hetfield‘s love of hunting and because its organizers traditionally steered clear of metal.

According to Setlist, Cyrus covered Anne Bredon’s “Babe I’m Gonna Leave You” nine times between 2014-15, borrowing the arrangement made famous by Led Zeppelin on their self-titled first album. Although the song, which has also been recorded by Joan Baez, was originally credited as a traditional song arranged by Jimmy Page on Led Zeppelin, Bredon sued and, by the early ’90s, was listed as a co-author and received back royalties.

Pink Floyd, “Wish You Were Here”

Cyrus again dipped into the Pink Floyd catalog of classics in April 2020 when she sang “Wish You Were Here.” This time it wasn’t in concert or on record, but from her home, performing on Saturday Night Live in the midst of the coronavirus pandemic.

The COVID-19 lockdown led to another high-profile classic-rock cover: Cyrus delivered the Beatles’ “Help!” at an empty Rose Bowl in Pasadena, Calif., as part of Global Citizen’s “Unite for Our Future” livestream. She dedicated the performance “to those who are tirelessly working on testing, treatment and vaccines so all of us can come together in places like this empty stadium again.”

Shortly after announcing his farewell tour, Elton John showed up at the 2018 Grammy Awards to sing “Tiny Dancer.” After taking the first verse, he called Cyrus onto the Madison Square Garden stage, where she sang the second, with the two performing a duet on the famous chorus.

Elton John, “The Bitch Is Back”

A few days after appearing on the Grammys with John, Cyrus took part in I’m Still Standing: A Grammy Salute to John, where she sang a countrified cover of “The Bitch Is Back.” A studio take appeared three months later on Restoration, an album of country artists performing John’s classics.

Elton John, “Don’t Let the Sun Go Down on Me”

The same day Restoration arrived in stores, Revamp gave the same treatment to John’s catalog via rock and pop acts. Cyrus was the only musician to appear on both albums, singling “Don’t Let the Sun Go Down on Me” on Revamp.

Three years before taking on Led Zeppelin and Pink Floyd at iHeartRadio, Cyrus sat in with Billy idol at the 2016 festival to perform his classic “Rebel Yell.” She appeared onstage wearing a leather jacket with Idol’s face painted on the back and pants featuring his name.

In 2015, Cyrus helped Joan Jett kick off the Rock & Roll Hall of Fame‘s induction ceremony by helping out on “Crimson and Clover,” a performance that also featured Dave Grohl and Tommy James, who wrote and first recorded the track. Later in the evening, Cyrus inducted Jett into the Rock Hall with a speech.

As part of a TV special celebrating the 40th anniversary of Saturday Night Live, Cyrus was on hand to sing Paul Simon‘s “50 Ways to Leave Your Lover.” The song’s composer, a frequent SNL musical guest and host, had earlier appeared on the show during the monologue, singing “I’ve Just Seen a Face” with Paul McCartney.

Cyrus, who first achieved fame starring on the Disney Channel’s Hannah Montana, returned to television in 2019 in an episode of the British anthology series Black Mirror (which airs in the U.S. on Netflix). She played Ashley O, a pop star looking to show off her darker side. Among her new material is a version of Nine Inch Nails‘ “Head Like a Hole” with new lyrics that received Trent Reznor‘s blessing.

As Hannah Montana concluded its television run, Cyrus sharply pivoted away from her image as a Disney pop princess, beginning with 2010’s Can’t Be Tamed. The move toward a more adult sound extended to her choice of covers on tour in 2011, including Nirvana‘s “Smells Like Teen Spirit,” which she sang 21 times that year. “I want to play a song by one of the artists that inspired me,” Cyrus told a crowd. “Without them, I wouldn’t be here. They are the ones who gave me the strength and courage to do this. I hope I can be that person for you guys.”

At a Chris Cornell tribute concert that took place in early 2019, Cyrus sang “Say Hello 2 Heaven,” originally recorded by a side project of Cornell’s, Temple of the Dog. Metallica drummer Lars Ulrich wrote on Instagram that he was “stunned” by her “next-level version” of the tune. “Beyond inspiring.”

In September 2016, Cyrus appeared on The Tonight Show Starring Jimmy Fallon, but instead of performing one of her own songs, she pulled out an obscure Dylan song called “Baby, I’m in the Mood for You.” Dylan’s recording of the track didn’t surface until the 1985 Biograph compilation, but it was first recorded by folk-blues singer Odetta on a 1965 album comprised entirely of Dylan songs.

Poison, “Every Rose Has Its Thorn”

Of all the tracks on this list of Miley Cyrus Classic Rock Covers, only one stems from a Cyrus studio album. Can’t Be Tamed featured her take on Poison‘s “Every Rose Has Its Thorn,” which originally came out in 1988, four years before Cyrus was even born. It’s the only song on Cyrus’ 2010 LP that she didn’t have a hand in writing.