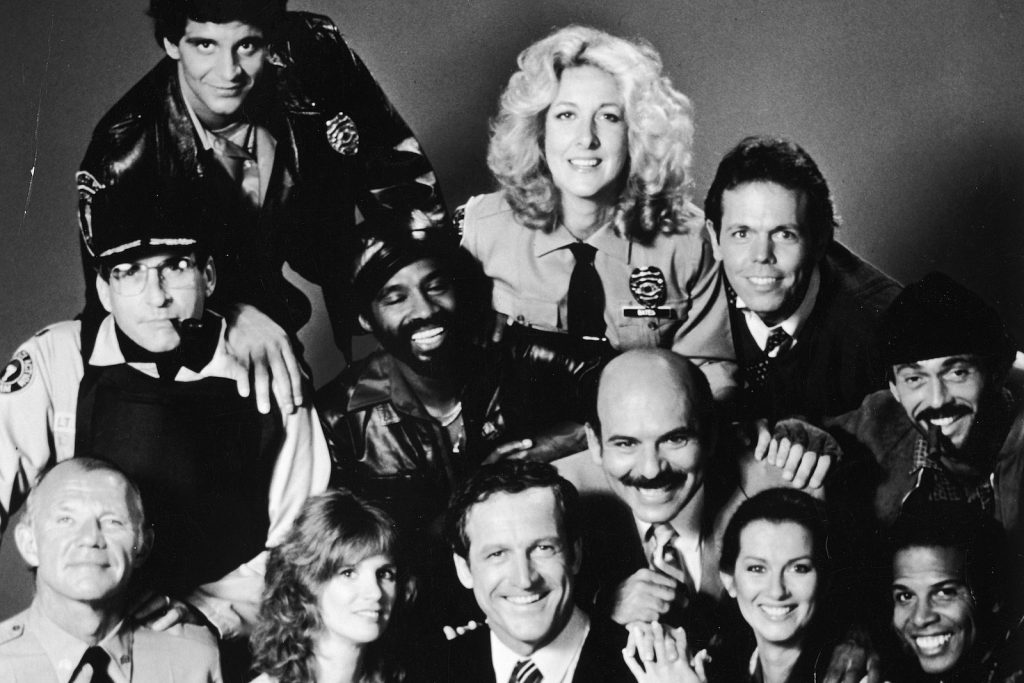 When Hill Street Blues premiered on NBC in January 1981, nobody quite knew what to do with it.

Critics loved it immediately, but audiences didn’t connect, and that spring, it was moved from Saturday night to Thursday night to Tuesday night with such dizzying speed that The New York Times suggested the network was “bent on killing the series.” By the time the show went off the air after seven seasons in May 1987, it had established itself as perhaps the most influential police procedural ever made, despite never ranking higher than number 23 in the Nielsen ratings.

Hill Street Blues was initially developed for NBC by MTM Enterprises, the production company founded in 1969 by Mary Tyler Moore (for whom it was named) and her then-husband Grant Tinker. MTM hired a pair of up-and-coming television writers, Steven Bochco and Michael Kozoll, to create the show. Both were already established in Hollywood — Bochco had written for Columbo and Kozoll for Kolchak and Switch­ — and primed for a breakout. MTM gave them enough room to do just that.

The show Bochco and Kozoll created had a setting that, by 1981, was already familiar to audiences. In a 2002 interview with the Academy Television Foundation, Bochco said part of the inspiration for the show came from NBC executive Fred Silverman, who had been impressed by the 1981 Paul Newman film Fort Apache the Bronx and pushed the writers in that direction.

Fort Apache the Bronx sprung from a gritty detective genre that had risen to prominence in the ’70s, ranging from hits like The French Connection, Serpico and Dirty Harry to lesser-known fare like Across 110th Street. It was a film cycle that took place in decaying urban America and tried to articulate the problems of crime and law enforcement created by that environment.

Hill Street Blues put this idea on television for the first time, borrowing plenty of techniques from the big screen and inventing some of its own. It chronicled  the lives of police officers working in the Hill Street station in an unnamed American city. (Although it was filmed in Los Angeles, Bochco once noted that in his mind, it was an amalgam of Chicago, Buffalo and Pittsburgh.) Virtually every episode began with a roll call or mission briefing for the officers’ work that day and proceeded to weave between multiple storylines. Some were resolved throughout an episode, while others continued for several episodes or an entire season.

This densely interwoven narrative style was virtually unheard of on television at the time. There were at least 12 recurring characters, including the captain of the station (Daniel J. Travanti), his public defender girlfriend (Veronica Hamel) and the numerous detectives and officers working their various beats. Each had moments in which their personal lives came to the fore, or a case they were working on became the center of the week’s story.

The show’s complexity spawned numerous descendants. Some are obvious, like Bochco’s own later hit NYPD Blue and HBO’s beloved The Wire. But many are less obvious. The first king of ensemble hospital dramas, St. Elsewhere, was initially advertised as “Hill Street Blues in a hospital,” and it eventually passed the Hill Street Blues torch to shows as disparate as Grey’s Anatomy and Scrubs.

Similarly, Hill Street Blues‘ disarming blend of drama, wry humor and action (which recalled ’70s big-screen fare like Robert Altman’s M*A*S*H) would become hugely influential, as seen by the success of prestige shows like The Sopranos and Breaking Bad.

Many of Hill Street Blues‘ filmmaking techniques were also borrowed from the big screen. Several sequences used handheld cameras rather than floor-mounted ones, creating an almost-documentary-style feeling, a technique famously employed by director and documentarian William Friedkin in his gritty ’70s action and crime films like The French Connection, Sorcerer and Cruising. Additionally, Hill Street Blues used close-ups of actors and dense sound designs featuring overlapping dialogue to conjure an intensity and realism that had not been previously achieved on television.

In retrospect, Hill Street Blues may have been stronger medicine than ’80s audiences were ready for. Although it received 98 Emmy nominations and won 26 during its seven-year run and became a critical favorite, its popularity never quite matched its acclaim. When it was canceled in 1987, it went out with a whimper. Co-executive producer Jeffrey Lewis told the Los Angeles Times that the show’s cancelation was not due to declining ratings, but the fact that a “handful of the producers, writers and cast members are anxious to move on to new projects.”

Many of them would indeed move on to new things. Series regulars included Jeffrey Tambor, Dennis Franz, Jennifer Tilly and David Caruso, and guest stars ran the gamut from Don Cheadle and Bryan Cranston to Joaquin Phoenix and Forest Whitaker. The show’s writers and producers included not only Bochco and Kozoll, but David Milch (Deadwood) and Anthony Yerkovich (Miami Vice). Collectively, these luminaries have staggering resumes — but arguably, none ever worked on a TV project as influential as Hill Street Blues.