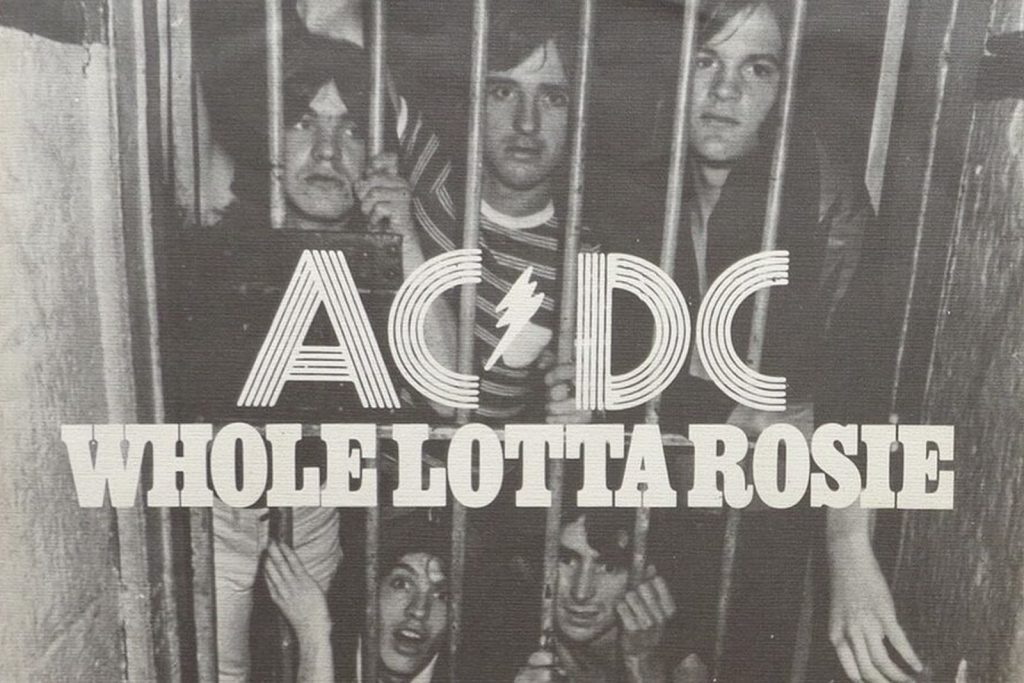 Bon Scott had few peers when it came to ribald lyricism — and he flaunted this bawdy songwriting prowess on AC/DC‘s barnstorming single “Whole Lotta Rosie.”

The eighth and final song off 1977’s Let There Be Rock began, as many great rock songs do, with a revelrous night out on the town. According to popular legend, Scott had been prowling the streets of Tasmania in the band’s native Australia after a gig when he caught the eye of a woman.

“Bon had gone out one night after we’d been playing. He’d just been wandering the streets around the little club areas,” guitarist Angus Young told Guitar World in 2000. “And he was walking past this street and this girl grabbed him from a doorway. She pulled him in and said, ‘Hey, Bon, in here.’ And he thought, ‘Hey, why not?’ The girl was there with her girlfriend, and he spent the night.

“This girl who was with Bon, she was a fair size girl,” Young continued. “I mean, they didn’t have Weight Watchers then. She said, ‘Bon, these last few months I’ve been with 28 famous people.’ And she was giving him the lowdown of politicians and different people she’d been out with and whatever. Anyhow, the next morning Bon woke up sort of pinned to the wall. The girl thought Bon was still sleeping. She leaned across to her girlfriend, who was sharing the room, and she said, ‘Twenty-nine.’

“Her name being Rosie, Bon thought it was a great title for a song,” Young concluded. “He said this girl was worthy of being put into a piece of poetry.”

“Poetry” is certainly one way to describe Scott’s lyrics, which simultaneously mock and praise Rosie for her appearance and sexual prowess: “Wanna tell you a story / about woman I know / When it comes to lovin’ / She steals the show,” he growls before listing Rosie’s supposed bodily dimensions. “She ain’t exactly pretty / Ain’t exactly small / Fort’-two, thirt’-nine, fifty-six / You could say she’s got it all.”

Scott delivers these lines over the song’s iconic start-stop intro, which was inspired by several first-generation rock ‘n’ rollers.

“We were always big fans of early rock and roll, like Elvis [Presley] and ‘Heartbreak Hotel,’ things like that — the stop-and-start things, the dynamics,” guitarist Malcolm Young said in Arnaud Durieux and Murray Engleheart’s 2006 book AC/DC: Maximum Rock ‘N’ Roll. “If anything, for ‘Whole Lotta Rosie’ we were looking for a feel like Little Richard, a good old steamin’ rock feel, and see what we could lay on top with the guitars. It evolved into that, but you’re just looking for the vibe, what’s exciting – and that’s what we were listening to.”

“Whole Lotta Rosie” appeared on Let There Be Rock on March 21, 1977, and AC/DC released it as a single the following year. (A live version from 1978’s If You Want Blood You Got It was also issued as a single.) It wasn’t a huge chart hit (except for in the Netherlands, where it reached the Top 5), but “Whole Lotta Rosie” became a fan favorite.

This is the band’s second-most-played song ever behind “The Jack,” according to setlist.fm, and performances feature a massive, well-endowed blow-up doll sporting a blonde bob and lingerie.

Many other bands have covered “Whole Lotta Rosie,” most notably Guns N’ Roses, who issued a live rendition on the B-side of their “Welcome to the Jungle” single in the U.K. Axl Rose later performed the song with AC/DC themselves while filling in for singer Brian Johnson on the Rock or Bust tour in 2016.

Scott often cracked jokes at Rosie’s expense while introducing “Whole Lotta Rosie” in concert. “We have a song about the biggest, fattest lady in the world. She’s a Tasmanian devil, 305 pounds,” he proclaimed on a live take of the song from the 1997 Bonfire box set, which also contains a demo version of the track with different lyrics titled “Dirty Eyes.”

“She was so big she sort of closed the door and put it on ya, half your body, and she was too big to say no to,” Scott later elaborated. “So I just sorta had to succumb. I had to do it. Oh my God, I wish I hadn’t. … That girl was some mountain. You can imagine the problems I had.”

This is, at least, one version of the Rosie story. But when it comes to the details, the members of AC/DC have proven unreliable narrators over the years. The only consistencies appear to be sexism and fat-shaming.

Some stories list Scott as Rosie’s 37th conquest instead of 29th, and the location of their encounter often varies. In 1978, Angus told the Record Mirror that Scott “used to party around with these two girls called the Jumbo Twins.” (He referred to them in a different interview as the “Jumbo Jets.”) Two years earlier, Malcolm said the encounter took place in the band’s dressing room after a show and referred to Rosie variously as “Big Bertha” and “the fat one.”

Former AC/DC bassist Mark Evans also called Rosie a “massive fucking whale of a woman,” claimed she ran a brothel out of the back of a Melbourne hotel and said the band called her Rosie because she had red hair.

More concrete details about Rosie emerged in March 2022, when author Jesse Fink wrote in a blog post that he had been contacted by an Australian woman who claimed to have known Rosie. “Rosie was Rosemaree Garcia and Mark Evans was right: She had a mass of red curly hair and was nothing like the [stage] doll,” the woman told Fink, author of The Youngs: The Brothers Who Built AC/DC and Bon: The Last Highway. “I can also tell you she died of a heroin overdose back in 1979, which is why she’s never come forward.”

The woman added that Rosie “had a very sad life” and “was born in Tasmania but lived and died in St. Kilda.” She allegedly “became a heroin addict and prostitute to support her habit.”

The woman also corroborated accounts of Rosie’s size: “She was a big girl: tall and heavy. She was part [Pacific] Islander on her dad’s side and her mum was tall if I remember correctly. Very probably around the size Bon wrote about before she was ravaged by drugs. I couldn’t tell you if it was exact. I never weighed or measured her and no, she wasn’t pretty.”

As for why she didn’t come forward with these details earlier, the woman said that “while I knew about her and Bon back then, I didn’t know the song existed ’til years later, or that there was so much interest in who she was. It wasn’t my story to tell.”

When the group gets inducted into the Rock & Roll Hall of Fame without you.

The Only Time AC/DC Were Late for a Show