How AC/DC Hit the Mark With ‘Heatseeker’ 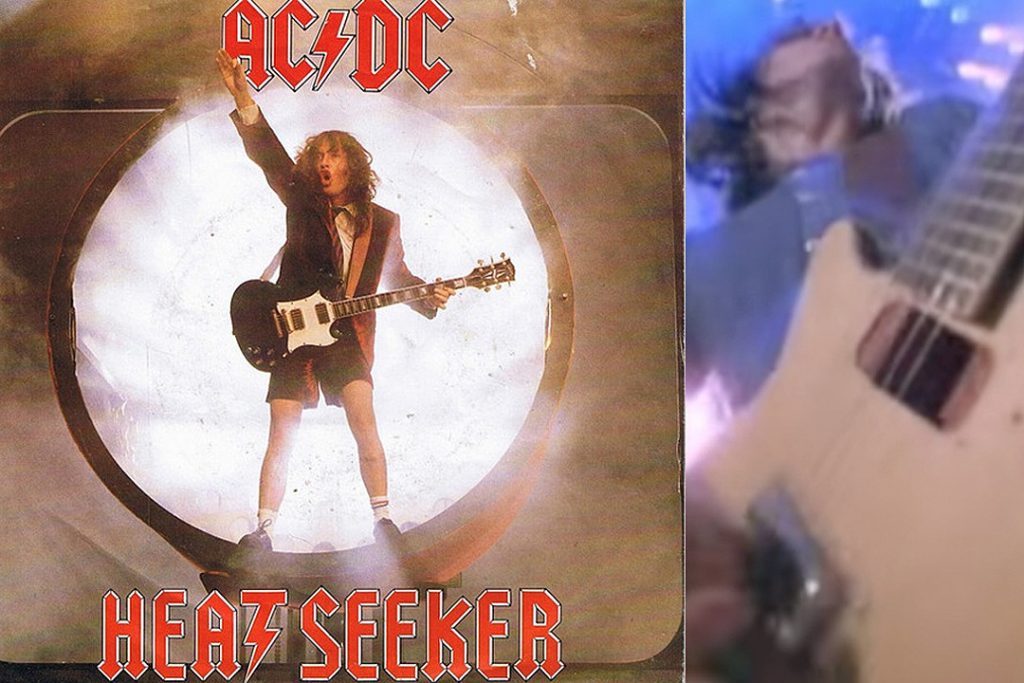 Like a missile locked on target, AC/DC‘s “Heatseeker” was a hot moment during an otherwise cool period.

Although their albums were still going platinum, the quintet’s 1983-88 stretch was considered fallow, both commercially and artistically. After opening the decade with the one-two punch of Back in Black and For Those About to Rock (We Salute You), AC/DC entered retread mode on subsequent records like 1983’s Flick of the Switch and 1985’s Fly on the Wall, with the monotony only broken up by a few standout songs, ambitious tours and the intriguing Who Made Who soundtrack album for the 1986 Stephen King film Maximum Overdrive.

AC/DC was still shaking fans, but perhaps not all night long as they had done before.

The group launched “Heatseeker” on Jan. 11, 1988, as the first strike of its 11th album, Blow Up Your Video, which landed a week later. A characteristically sinewy, double-entendre-laden rocker penned by guitar-slinging brothers Angus and Malcolm Young and frontman Brian Johnson, “Heatseeker” made an explosive impact. The song reached No. 5 on the Australian charts and No. 20 on Billboard‘s Mainstream Rock chart, the band’s best showing in six years. It also gave AC/DC their highest charting U.K. single to date (No. 12), a record that lasted for 25 years until a resurgent “Highway to Hell” landed at No. 4 in December 2013 as part of a fan campaign to make it that year’s Official Christmas No. 1.

“Heatseeker” was further immortalized by its David Mallet-directed video, which blends the band’s live performance with Strategic Air Command footage. Angus tosses his cap onto a missile switch, accidentally launching it around the world and into the Sydney Opera House, where the band is performing (though the clip was filmed at Cannon Studios in England). The warhead pops open to reveal Angus in trademark schoolboy attire, soloing above the rest of the band.

“[‘Heatseeker’] was a fun one,” Angus told this writer during AC/DC’s Blow Up Your Video tour. “We had the riff, like we usually do, then got it into shape and Brian put the lyric on, and … there it was.”

Written early in the album process, “Heatseeker” served as a template for what AC/DC wanted to accomplish with Blow Up Your Video. “We wanted to carry on where Who Made Who had left off,” Malcolm told Metal CD in 1992. “We lost our footing by that time, and we needed to get the old feeling back again. … We tried to capture that traditional 12-bar rock ‘n’ roll sound that we had in the beginning. ‘That’s the Way I Wanna Rock ‘n’ Roll’ and ‘Heatseeker’ were the ones that went down best when we played them live, and they’ve stayed in the set.”

To get the “old feeling back again,” AC/DC reunited with producers Harry Vanda and George Young, Angus and Malcolm’s older brother. Vanda and Young were both former members of Australian rock sensation the Easybeats, and they had produced every AC/DC album up through 1978’s If You Want Blood You’ve Got It. “There was more production on the album than there had been on Fly on the Wall or Flick of the Switch,” Malcolm noted.

“It was like putting on a comfortable old pair of paints,” Angus said at the time. “[Vanda and Young] know where we come from and what we are, so it made sense to work with them again.”

Then-drummer Simon Wright also praised Vanda and Young in Martin Popoff’s book AC/DC: Album by Album, saying the duo “brought so much. They’re a great team, very musical and a big help. … It was more productive than it had ever been. There wasn’t much downtime. There was a set plan for the day that we would try to achieve with regard to getting songs down and stuff. It was a great time.”

AC/DC’s diligence was rewarded when Blow Up Your Video reached No. 2 on the Australian and U.K. charts and No. 12 on the Billboard 200, their highest placement since For Those About to Rock. The supporting tour brought the band back to Australia for the first time in seven years, commencing on Jan. 29, 1988, in Perth. Life imitated art as the tour reached North America, where the shows began with a heat-seeking missile rising to the stage, followed by the set-opening “Heatseeker.”