How Alice in Chains Have Endured Since Layne Staley’s Death 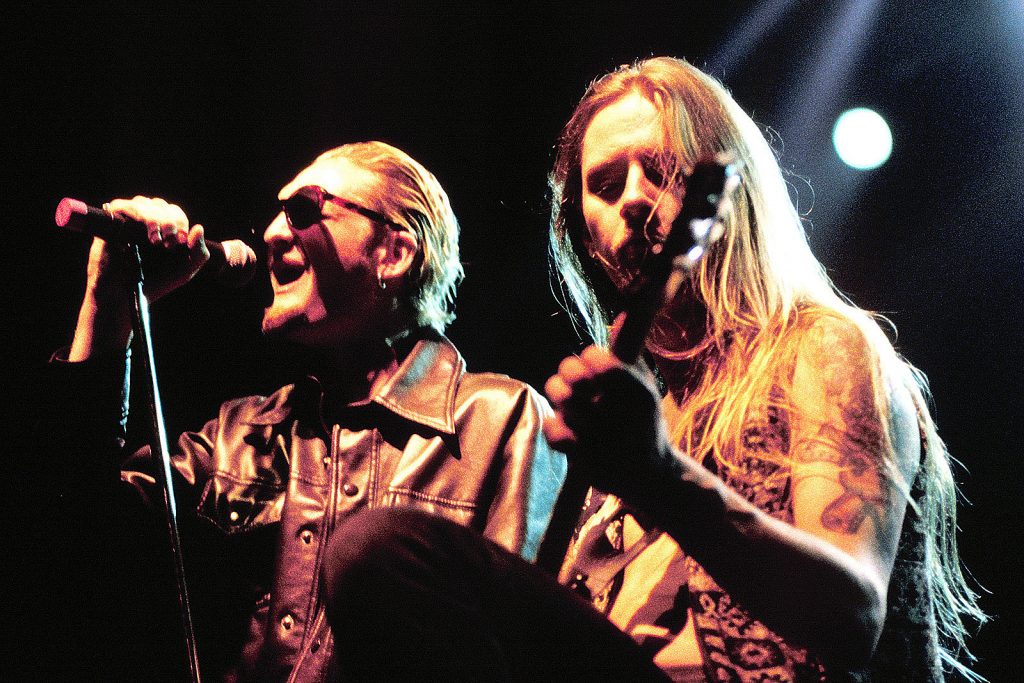 On April 5, 2002, Layne Staley, Alice in Chains singer and one of the defining voices of grunge, died at the age of 34.

He had long battled addiction, going into and out of rehab but rarely remaining sober for an extended period. By the time of his death, Staley had become a recluse. It had been six years since his final performance – an Alice in Chains gig opening for Kiss on July 3, 1996. His body wasn’t found until weeks after a fatal overdose.

In many ways, the members of Alice in Chains had already begun moving on before Staley’s death. Jerry Cantrell – the band’s lead guitarist, co-singer and primary songwriter – released his first solo album in 1998. A follow-up, Degradation Trip, arrived just a couple of months after Staley’s death. Cantrell also collaborated with a range of artists, including an appearance on Metallica‘s 1998 album Garage Inc.

Likewise, drummer Sean Kinney had also made guest appearances on other artists’ songs over the years, working with Metallica and Johnny Cash, as well as contributing to Cantrell’s solo material. Meanwhile, bassist Mike Inez – who also played on Cantrell’s solo work – contributed to It’s Five O’Clock Somewhere, the 1995 debut album from Slash’s Snakepit, the side project of Guns N’ Roses guitarist Slash.

So each musician was continuing down their respective paths in the late ‘90s, while still tethered to Alice in Chains. Staley’s 2002 death seemed to signify the band’s end. Or so it seemed.

“Layne’s death due to addiction was something that gutted us, and the band considered themselves over at that point,” the group’s longtime manager, Susan Silver, recalled to Pollstar. “But they’d never broken up even though they hadn’t played together for nine years. … We couldn’t imagine those guys being onstage together without Layne.”

On Feb. 18, 2005, Alice in Chains’ remaining members reunited for a charity event, helping raise support for victims of the tsunami disaster that had struck South Asia. The performance featured a rotating list of guest singers, including Maynard James Keenan of Tool and Heart’s Ann Wilson.

“More emotion was experienced that night than any of us anticipated,” Silver admitted. “To see them playing again, and for them to be playing together again, was overwhelming.”

The benefit show lit a spark among the remaining Alice in Chains members, who agreed they wanted to play more shows to see if a reunited lineup could continue.

“We’re not interested in stepping on [Staley’s] rich legacy,” Cantrell told MTV at the time. “It’s a tough thing to go through. Do you take the Led Zeppelin approach and never play again, because the guy was that important?” the guitarist pondered, alluding to Zeppelin’s 1980 breakup following the death of drummer John Bonham. “That’s the approach we’ve taken for a lot of years. Or do you give it a shot, try something? We’re willing to take a chance on it. It’s completely a reunion because the three of us who are left are back together. But it’s not about separating and forgetting — it’s about remembering and moving on.”

Realizing they still had the desire to be a band, the surviving trio recognized the need for a more permanent replacement singer. Enter William DuVall, whom Cantrell had befriended several years earlier when working on Degradation Trip.

“I liked him right off the bat,” Cantrell admitted during a discussion with Lars Ulrich on Apple Music’s It’s Electric. “And so when the conversation came up between Mike and Sean and I, I was like, ‘I think I know a guy to call.’ And so I invited him down and we played, and the first song I think we played together was ‘Love, Hate, Love.’ And that’s a big piece to bite off. And he fucking nailed it. Sean and Mike looked over at me, and they’re like, ‘Yeah, OK, I think this guy can be good,’ you know? And so that’s how everything started.”

A few dates became a tour, and one tour led to the next. Along the way, the band made sure to continually honor Staley’s memory. With DuVall in the fold, they weren’t looking to recreate the electricity they had captured with their former singer but rather build upon an already formidable legacy.

In 2009, Alice in Chains released Black Gives Way to Blue, their first album with DuVall. The LP was well-received, achieving gold sales and earning two Grammy nominations. Single “Check My Brain” even reached the top of the alternative and mainstream rock charts.

“We were just hoping to make the best record we possibly could, and we did that,” Cantrell noted to Billboard, with Kinney adding that the LP reflected what the band had been through since its last tour with Staley. “A lot has happened since 1995, a lot has happened in our lives and we’ve never talked about it or discussed it publicly. So some of that is what’s addressed [on the album].”

With their focus renewed, Alice in Chains released two more albums in the following years: 2013’s The Devil Put Dinosaurs Here and 2018’s Rainier Fog. The band has also kept an active tour schedule, even enjoying some dates on Gun N’ Roses’ vaunted Not in This Lifetime … tour.

The band’s members have also been sure to maintain other projects outside of Alice in Chains. Cantrell released his fourth solo album, Brighten, in 2021. DuVall put out his first solo LP, One Alone, in 2019. Inez, who spent three years as a member of Heart during Alice in Chains’ early ’00s hiatus, regularly collaborates with the veteran band. Kinney is part owner of the Crocodile, a legendary Seattle music venue that helped spawn some of the area’s biggest acts.

Even as Alice in Chains push forward, Staley remains an essential part of the band. “He had a real unique and powerful voice, but he had a sensitivity and touch to it as well,” Cantrell noted. Meanwhile, Kinney confessed, “He’s always a part of my everyday life. There’s not a day that goes by that I don’t think of him.”