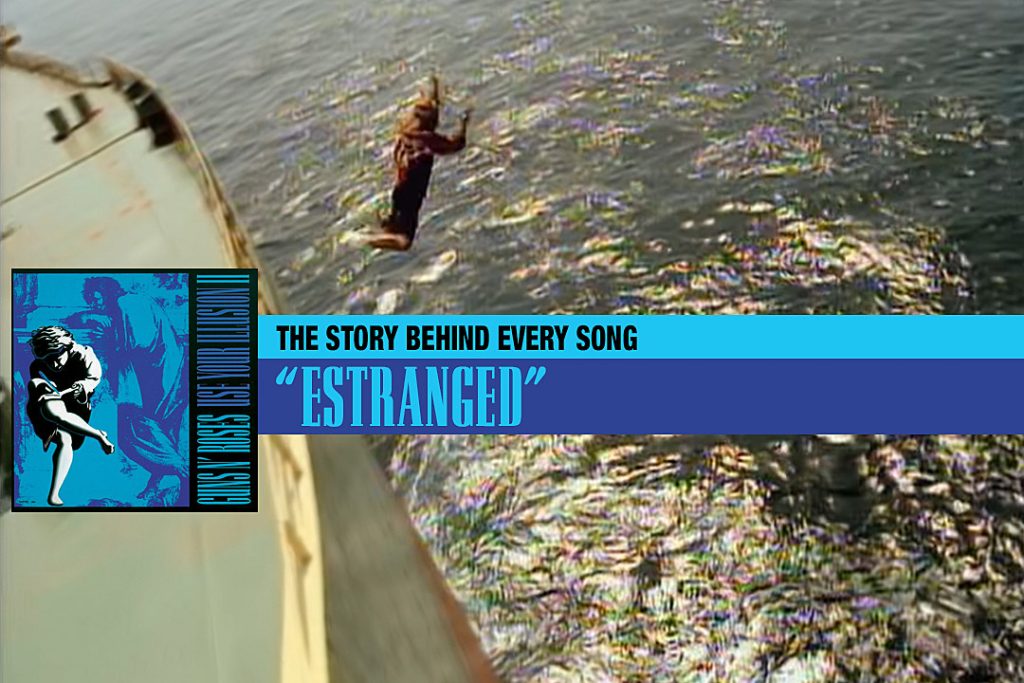 With their relationships, health and band disintegrating before their eyes, the beleaguered Guns N’ Roses pulled off one last masterpiece with the heartrending Use Your Illusion II ballad “Estranged.”

The nine-and-a-half-minute tune was cut from the same cloth as other Use Your Illusion epics, such as muscular rockers “Coma” and “Locomotive” and fellow piano-driven ballad “November Rain.” The song is credited solely to Axl Rose, whose lyrics channel his frustration and heartache over the dissolution of his marriage to Erin Everly, whom he was married to from 1990 to 1991.

“I wrote the song basically about who I am and how I feel, and the breakup of my marriage with Erin and how I didn’t want it to die,” Rose said in the final installment of the Making F@*!ing Videos behind-the-scenes documentary, released in 1994. “But I also apply it to a lot of other situations, or friendships, or family things, where you knew it had to end.”

Rose also drew parallels between “Estranged” and its spiritual successor, “November Rain.” “‘November Rain’ is a song about not wanting to be in a state of having to deal with unrequited love,” he said. “‘Estranged’ is about acknowledging it and being there, and having to figure out what the fuck to do. It’s like being catapulted out into the universe and having no choice about it, and having to figure out what the fuck are you gonna do, because the things you wanted and worked for just cannot happen, and there’s nothing you can fucking do about it.”

As with “November Rain,” Rose tinkered incessantly with “Estranged” before working out an arrangement with his bandmates, who began writing the skeleton to the song in Chicago in 1989. “‘Estranged’ was a song that Axl had been working out on piano for a long time — he’d been playing the same parts over and over in Chicago and afterward,” Slash wrote in his 2007 memoir. “It was clear that it was working itself out in his head. I had started writing guitar parts for it back in Chicago, so it came together in no time once we focused on it.”

Slash’s aching guitar melody became a crucial component to “Estranged.” He achieved his distinctive tone by switching to the neck pickup on his Gibson Les Paul Goldtop and rolling the tone knob all the way down. It was grueling but satisfying work. “The guitar and bass parts had to be thought out and done precisely,” Slash wrote. “Those songs were all pretty fucking cool, I have to say, but they took some work.”

The guitarist’s efforts earned him a shout-out in the Use Your Illusion II liner notes (“Slash, thanks for the killer guitar melodies”), which he felt he rightly deserved. “Afterwards, when it was done and recorded, I was like, ‘Ax, okay, I got to get credit on this for the guitar stuff,'” Slash laughingly said in Making F@*!ing Videos. “Because it was, like, a big part that went on top of what he’d already wrote. I was pretty proud of it, because it’s hard to write to somebody else’s music.”

Lyrically, musically and structurally, “Estranged” was a bona fide work of genius by the band and Rose, who strived to match the grandeur of his musical heroes like Elton John and Queen. But its brilliance was nearly overshadowed by its head-spinning, bank-breaking music video. Shot variously in Texas, Arizona, Los Angeles and Germany, the 10-minute odyssey features a spectral Rose leaving his body and walking into a shower fully clothed; prowling Los Angeles sidewalks as dolphins swim through the streets; leaping off an oil tanker into the ocean, where he is rescued by said dolphins; and, finally, Slash rising from the watery depths to rip a guitar solo while standing atop the waves like some sort of chain-smoking, top-hatted Christ.

If these events sound ludicrous on paper, you can rest assured they don’t make one more iota of sense onscreen. Nevertheless, Rose considered the “Estranged” video a deeply personal, cathartic endeavor. “I don’t necessarily know of anyone who’s made a video like it,” he said in Making F@*!ing Videos. “You know, showing their own emotional destruction and their process of transcending that.”

The “Estranged” video was originally supposed to serve as the conclusion to a trilogy that also included “Don’t Cry” and “November Rain.” Loosely based on a short story called Without You written by longtime band friend Del James, the trilogy was supposed to plot the arc of Rose’s relationship with his girlfriend at the time, Stephanie Seymour, who appeared in “Don’t Cry” and “November Rain.” But the band and director Andy Morahan were forced to change course with “Estranged” following Rose and Seymour’s messy, public breakup, which involved dueling lawsuits and accusations of assault from both parties.

“Actually, ‘Estranged’ isn’t, in some ways, a part of the trilogy,” Rose said during a 1994 Rockline interview. “It’s more like part four. Part three was a mutual self-destruction of the couple that was in ‘November Rain.’ And, well, someone had other plans, and we were in a position where something we had worked on for five years had to be rewritten to kinda transcend it. So it’s a video about transcendence of a real-life situation that didn’t have a whole lot to do with the story that was intended. And actually I’m kinda glad we made this video instead of the one we were going to make.”

Despite all of Rose’s talk of transcendence, Morahan admitted the actual content of the Use Your Illusion video trilogy made little sense. “It was never really fleshed out,” he told Kerrang! in 2020. ​”It was to do, I guess, with Axl falling in love with a girl, and he was going through personal regressive therapy, whatever that was. … Things that had happened in his past and all that kind of stuff. … I couldn’t really begin to explain what it all meant.”

And what about those damn dolphins? “By that time [of the ‘Estranged’ video], Axl had split up with Stephanie Seymour, and he was like, ​’I don’t want any more beautiful girls in my videos; I’d rather have a dolphin,'” Morahan recalled. “We knew that we were deliberately doing that so people would go, ​’What’s all that about?!’ There was a sense that it was throwing up a lot more questions than answers, and that suited everybody – it created a myth and intrigue around the whole trilogy.”

Guns N’ Roses released “Estranged” as the final Use Your Illusion II single in December 1993. By that time, the grunge revolution was in full swing, and bands like Nirvana and Alice in Chains made Guns N’ Roses’ bombastic hard rock look self-indulgent and out-of-touch. The band was also still coming down from its two-and-a-half-year Use Your Illusion Tour, which ended in July 1993. Unknown to them at the time, it would mark the last time Rose, Slash and Duff McKagan would share a stage for 23 years.

Consumed by their own personal drama and excesses, Guns N’ Roses were imploding before the world’s eyes, lending a bittersweet prescience to the lyrics of “Estranged”: “I knew the storm was getting closer / And all my friends said I was high / But everything we’ve ever known’s here / I never wanted it to die.”