How Axl Rose Was Animated for His ‘New Looney Tunes’ Episode 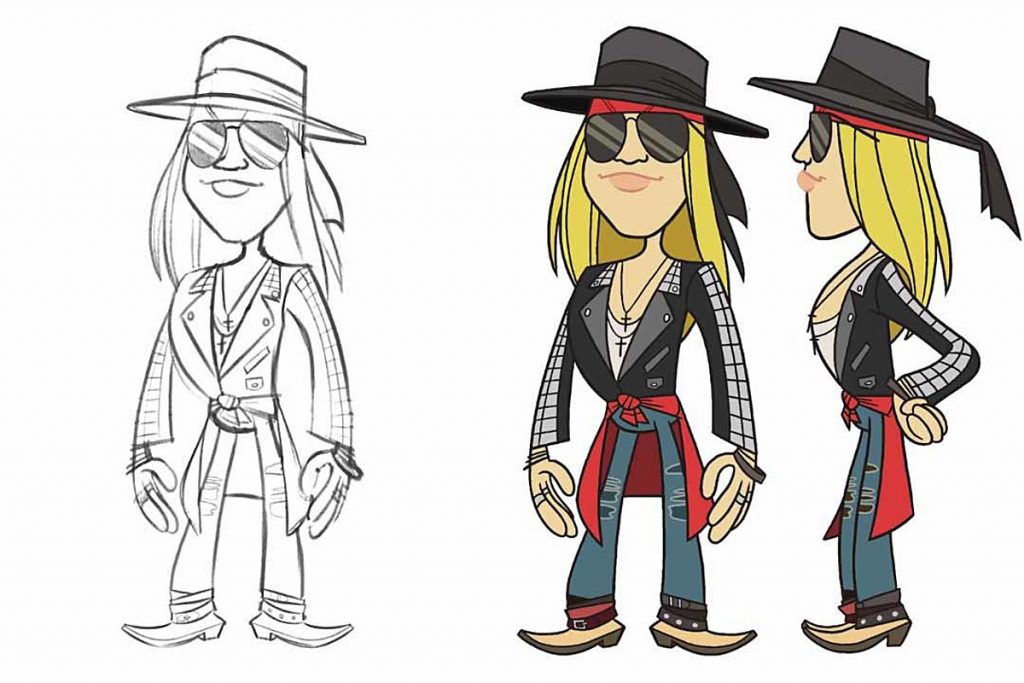 A new video shows how Guns N’ Roses singer Axl Rose was animated in a New Looney Tunes cartoon that aired in December 2018.

Earlier today, Guns N’ Roses uploaded a video featuring Jennie Hoffer, lead character designer for the show, to their Facebook page. “Character designers are in charge of getting the look right,” she says. “The first step is making a rough drawing.”

From there, Hoffer takes us through the process, starting with a rough drawing that outlines his shape. That’s followed by a “tie down,” which she defines as a “more refined version of the rough,” where some of the details, such as his sunglasses and his accessories, are added. Then comes the “ink line,” that gives the drawing what she calls a “final polish.” She turns her design over to the color department who send it off to animation to complete the task.

The cartoon, called “Armageddon Outta Here, Part Two,” saw Rose, with the help of Bugs Bunny, Porky Pig and the rest of the New Looney Tunes crew, save the world from an oncoming asteroid by singing a song called “Rock the Rock” with such volume that it shrinks the asteroid to the point where it lands harmlessly at their feet. You can watch the whole episode at Boomerang.

Back in June, writers Rob Janas and Kevin Fleming discussed the creation of the episode. They said they thought of the idea after attending a Guns N’ Roses concert where the band walked onstage to the Looney Tunes theme song. From there it was matching Rose up with the right script idea, but it took a lot of work to finally land the singer due between his busy schedule and his people offering input on how he was drawn.

Although they were worried whether it would happen until Rose set foot in the studio, they said he “couldn’t have been nicer” and even wore a Wile E. Coyote t-shirt to mark the occasion. Even more impressive, they said, was watching him record his vocals for the song. After about two or three hours, Rose completed the session.