How Burt Reynolds Parodied Football and Self-Help in ‘Semi-Tough’ 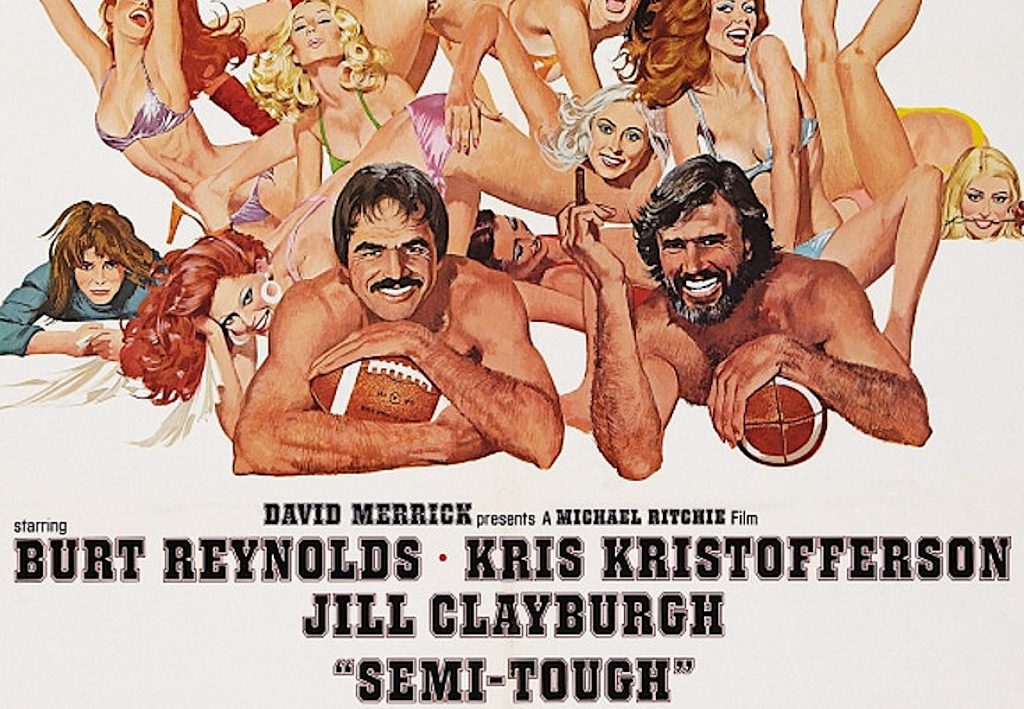 Director Michael Ritchie’s “Semi-Tough” may not be the greatest football movie ever made, but it’s certainly one of the most interesting.

Released on Nov. 18, 1977, it touches on everything from the life of a pro football team on the road, to the self-help movements of the ’70s, and to the nature of love and friendship. It’s also a great example of the kind of movies that populated that decade: funny and serious at the same time, not afraid to brush up against big ideas, and designed as an entertainment for adults.

The movie is based on a 1972 novel of the same name by longtime sportswriter Dan Jenkins, focusing on the grandeur, ridiculousness and excesses of pro football in an era that was defined by mythical figures like Vince Lombardi and the emergence of the Super Bowl as the crown jewel of American sports.

By the time it was optioned and then green-lit by United Artists, however, American culture had changed a great deal, and so screenwriter Walter Bernstein and director Ritchie added a new dimension to the story, turning it into a gentle critique of the fad of spiritual self-improvement that was then enveloping the country.

The story centers on three oddball best friends: Billy Clyde Puckett (Burt Reynolds) and Marvin “Shake” Tiller (Kris Kristofferson) are players for a pro team in Miami, and their roommate Barbara Jane Bookman (Jill Clayburgh) is the daughter of the team’s owner. The three do everything together – from eating meals to staying in adjacent hotel rooms when the team’s on the road – but there’s never been any romantic complications between them.

Watch a Trailer for ‘Semi-Tough’

This changes when Shake gets involved with a self-help movement called B.E.A.T. (a parody of a ‘70s movement called EST). This organization promises to actualize the life potential of anyone who subscribes to it, involving things like attending conferences where you’re not allowed to go to the bathroom for 12-hour stretches. B.E.A.T. is led by a charismatic if slightly slimy guru named Friedrich Bismark (Bert Convy).

Barbara Jane finds herself attracted to the newfound sense of self that B.E.A.T. has given to Shake, and the two start dating just as the team is gearing up to make a run for the Super Bowl. It’s only then that Billy Clyde realizes that he also has feelings for Barbara Jane, and the second half of Semi-Tough revolves around his attempt to break up his friends’ wedding, and the question of whether all of this will imperil Miami’s chances at winning a championship.

The film has a number of quiet virtues. The characters are better drawn and more nuanced than those that appear in almost any other sports film of the ’70s. The acting is also very good. Reynolds brings his usual charm to the role, but never slips into the broadness that can bedevil some of his less-interesting performances from those years. This is matched perfectly by Kristofferson’s internality and ability to lend a thoughtfulness to even the most comedic moments in Semi-Tough. Clayburgh would be nominated for Academy Awards in each of the following two years, and win one for An Unmarried Woman in 1978. Unsurprisingly, she’s absolutely believable as a woman who can hold her own in friendships with two testosterone-laden men.

Beyond this, Semi-Tough also plays to the two strengths that director Ritchie would display throughout his career: sports films and comedies. He’d gotten his start in 1969 with the Robert Redford vehicle Downhill Racer, which helped kick off the sports-movie cycle of the ’70s, and had then gone on to make The Bad News Bears in 1976, a moderate hit that almost immediately became a cult classic. Into the ’80s, Ritchie moved more directly into comedy, with things like Fletch, Wildcats, and The Golden Child.

In Semi-Tough he brings both these strands together, creating a movie in which there’s enough on-field and behind-the-scenes football material to make it a sports film and at the same time enough dialogue and character-based humor to qualify it as a wry, observational comedy. But the most interesting thing about the film is the way it combines ’70s-appropriate cynicism about institutions – religion, self-help, even football – with a deep belief in humanity.

Shake isn’t the only one who gets involved in a movement that makes big, hollow promises. Team owner Big Ed Bookman (Robert Preston) has become an adherent to a kind of movement therapy that requires him to spend as much time as possible crawling around on the ground, in a sly parody of things like the Alexander Technique. Meanwhile, the captain of the team playing against Miami in the Super Bowl (Carl Weathers) believes in a cult that tries to harness the power of the pyramids to increase physical vigor.

Semi-Tough also doesn’t spare Catholicism: In the scenes running up to the wedding, B.E.A.T. founder Bismark takes advice from a priest on how to use tax-exempt status to get away with real estate scams, and the best way to launder money. The subtlest cult of the whole film, however, is football itself. The players (including the late Brian Dennehy and Roger E. Mosley) are all a bit goofy, and run just as amok as the believers in B.E.A.T. In the end, the team owner Big Ed is running a cult of personality just as much as is Bismark.

Against all of this, the love triangle between Shake, Billy Clyde and Barbara Jane resembles nothing so much as the attempt of people trying to figure out how to keep their wits when institutions all around them are trying to force everyone to believe in one thing or another. The wonderfully tender ending between Billy Clyde and Barbara Jane serves as a humanistic answer to the question of how to do this: Just find someone you love.