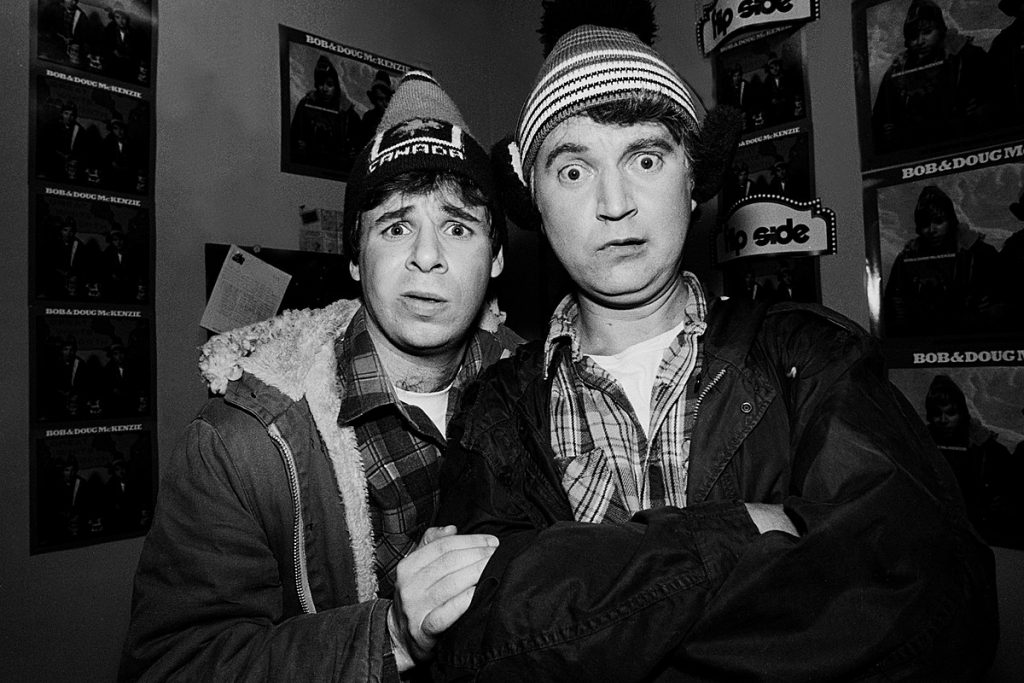 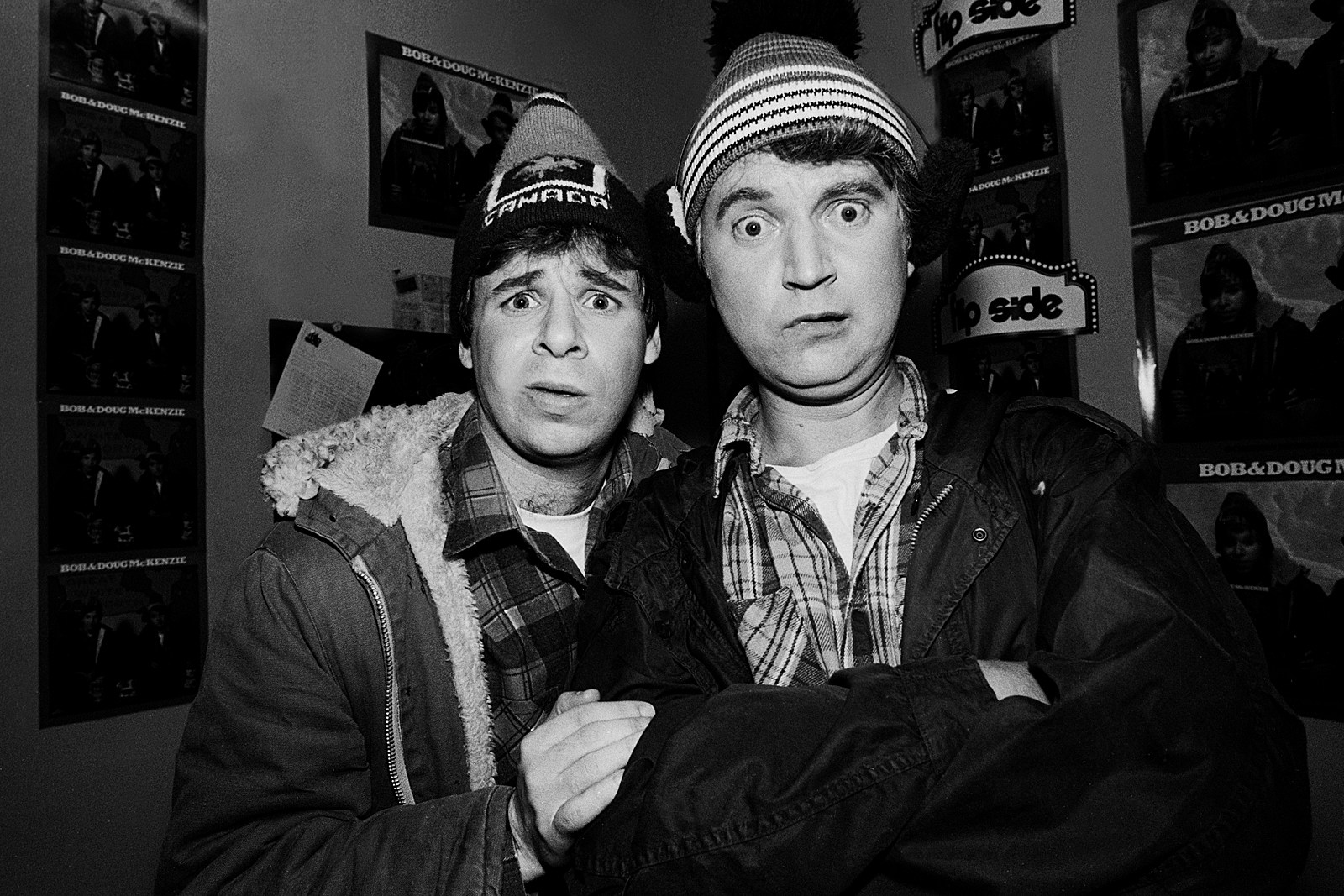 If not for a government mandate insisting on “distinctively Canadian programming,” an initially annoyed Dave Thomas and Rick Moranis never would have created SCTV‘s famous Bob and Doug McKenzie characters, which made their television debut on September 19, 1980.

“Our first reaction was, the show is done in Canada and we’re Canadian; isn’t that enough? [But] they wanted Canadian, they got Canadian,” Moranis told People.

From 1976 through 1979, SCTV aired on the privately-owned Global Television Network in Canada before moving over to the Canadian Broadcasting Corporation (CBC), the country’s national public broadcaster, in 1980.

Where there was a smaller number of commercials inserted in the Canadian broadcasts as opposed to the U.S., the CBC allowed the show to add two additional minutes to its airtime. SCTV producer Andrew Alexander relayed the CBC demand to the show’s writers, including Thomas and his soon-to-be-McKenzie-brother Moranis. But these two minutes were not to be a free-for-all. According to Thomas in his 1996 book SCTV: Behind The Scenes, the two minutes had to contain “distinctive Canadian programming.”

“When Andrew came in with his mandate, Rick and I railed at him: ‘What do you want us to do? Throw up a map of Canada and sit there wearing toques and parkas?’ Apparently seeing the subversive potential in following the mandate word for word, Alexander sat back, smiled, and said: ‘Yeah, and if you could have a Mountie in it that would be great too.’ Not long after, we were on the set in front of a Canadian map, wearing toques and parkas, frying up back bacon, with a Mountie mug sitting in front of us, and we improvised these two-minute Bob and Doug sketches.”

“We went on the stage with no preparation and did 15 [episodes],” Moranis recalled. “Two of them were lousy, in three we cracked up and fell apart, so maybe six were keepers.”

According to Groovy History, Thomas and Moranis filmed their segment, which was originally called “Kanadian Korner,” but was switched to “Great White North”, at the end of a long day of filming, after everyone else had gone home. Typically, it was just Thomas, Moranis and one cameraman. The actors drank real beer on set and delivered their mostly ad-libbed material, striving to keep their characters as Canadian as possible.

Soon, the “Great White North” segments became more popular than the rest of the show, and eventually landed the pair a feature story in Rolling Stone.

“Perhaps Bob and Doug represent a change in comedy, a change both from the standard stand-up fare and from the neurotically zizzy flailings of a John Belushi or an Andy Kaufman,” the magazine wrote. “Instead of being wackily unpredictable, they are completely predictable. Their humor doesn’t savage an ethnic group — it brings you into that world, a world of back bacon, beer and pineapple-filled doughnuts.”

“They’re smaller than life and very vulnerable,” Moranis observed, telling the magazine, “Those guys are proud of their little show.”

In that same article, Moranis, in discussing the unexpected success of the show, stated they turned down an opportunity from CBS, which had offered the duo a half-hour show that would have aired Friday nights.

“And we turned it down to do SCTV. We’re glad we did, you know?”

In the years immediately following their unlikely rise, the McKenzie brothers found success outside of the small screen.

In 1981, Canada’s Anthem Records, then riding high on the success of Rush, signed Bob and Doug and released the duo’s debut record, Great White North. The lead-off single from the record, “Take Off,” featured cameo vocals from Rush bassist and vocalist Geddy Lee. The album sold more than a million copies while the single reached No. 16 on the Billboard Hot 100, higher than any Rush single ever did, ironically.

“That was so fun,” Lee told the A.V. Club in 2015. “Rick Moranis and I went to school together when we were really little. For about six years in a row, we were in the same class. And then when he was getting involved in that whole Bob and Doug thing, and it was really starting to become successful, they wanted to do this sort of pop song, and they naturally thought of me, which was nice.”

In 1983, the duo’s first full-length movie, Strange Brew, was released. Its plot followed the brothers who, while working at their favorite brewery, uncover a nefarious plot for mind control hatched by the evil Brewmeister Smith. The accompanying soundtrack to the movie snagged Moranis and Thomas the 1984 Juno Award – Canada’s Grammy Award equivalent – for Comedy Album of the Year.

Speaking with IGN in 2000, Thomas marveled at the fact Bob and Doug caught on to the extent they did south of the border, especially considering both actors felt they had stronger material in other SCTV sketches.

“We’re surprised that they caught on at all, because… you have to understand this from our perspective… we were shooting these shows in Edmonton, and we honestly didn’t think that anyone was even watching SCTV. So when we’d get any feedback at all, it was very surprising,” he recalled.

“Some of the McKenzies’ segments crept into the U.S. versions of the SCTV shows, and it was immediately something that the Americans responded to. It caught on faster in the U.S. than it did in Canada.”

If anything, the roles of Bob and Doug McKenzie proved to be a springboard for the careers of both Moranis and Thomas. The former appeared in the 1984 blockbuster Ghostbusters in addition to the Honey, I Shrunk The Kids series, while Thomas, among a slew of voice work, launched The Dave Thomas Show in 1990, along with guest appearances on Arrested Development.

And yet almost 40 years later, the legend of Bob and Doug McKenzie lives on. This past March, the city of Edmonton, Alberta erected life-sized bronze statues, complete with toques, jeans and open stubby beer bottles, at the corner of 103rd Street and 103rd Avenue. The monument was a collaborative effort between Edmonton sculptor Ritchie Velthuis, the non-profit SCTV Monument Committee as well as Moranis and Thomas.

“Bob and Doug were born in Edmonton over 40 years ago,” Thomas told the Edmonton Journal. “Edmonton is the perfect place for these statues because now we’re frozen stiff all year round, eh!”