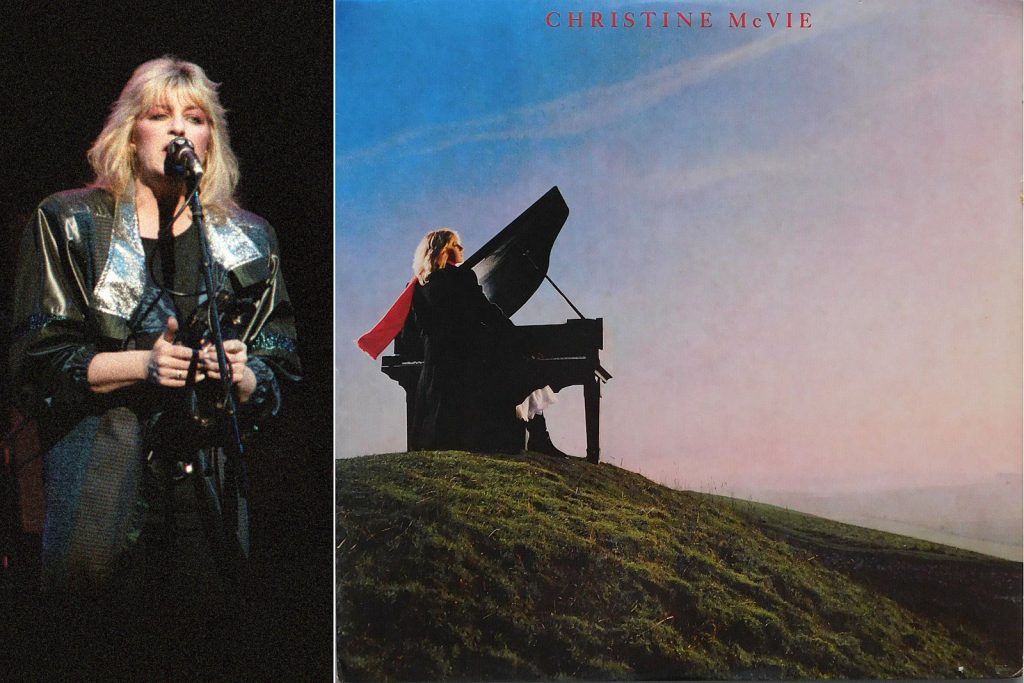 Christine McVie didn’t record what she considered her first “real” solo album until 1983 – and it was still a project she didn’t really expect.

Fleetwood Mac had recently returned to double-platinum success with Mirage, followed by a lengthy world tour to promote it. “I never had time to contemplate something like this,” McVie told this writer at the beginning of 1984, after she released the 10-track Christine McVie album produced by Russ Titleman.

Then Fleetwood Mac went on hiatus, and bandmates Stevie Nicks, Lindsey Buckingham and Mick Fleetwood began recording their own projects. McVie was happy enough to take a little time off – or so she thought.

“After the last tour, I was shattered, being on the road so long,” said McVie, who eventually took a lengthy break from Fleetwood Mac between 1998-2014. “I wanted to spend time at home, fixing up my house, getting to know my dogs again. Of course, you can only do so much of that before getting bored.”

A return to the studio produced Christine McVie, but it was not actually her solo debut. She’d recorded 1970’s The Legendary Christine Perfect Album, aka Christine Perfect, under her maiden name. The LP brought McVie out of the British blues band Chicken Shack, while bridging the gap until she joined Fleetwood Mac.

Future bandmates Danny Kirwan and then-husband John McVie helped out on the 12-song set, but McVie readily admitted that she was “not keen on that album. I thought there wasn’t much substance there, especially in my songwriting.”

Listen to ‘Ask Anybody’ by Christine McVie

Everything changed over the interim. McVie had become a hitmaker with Fleetwood Mac. She could now rely upon a sturdy creative process that already produced radio favorites such as “Say You Love Me,” “You Make Lovin’ Fun,” “Don’t Stop,” “Over My Head,” and “Hold Me.”

“I did it pretty much how I’d write for [the band], just go through the ideas I had to see what was worth developing and went from there,” she explained.

McVie was again joined by some musical friends – primarily Todd Sharp, who co-wrote five songs and contributed three others. McVie co-wrote “Ask Anybody” with Steve Winwood and “So Excited” with future-Fleetwood Mac bandmate Billy Burnette. Buckingham played guitar on three tracks and contributed backing vocals to two, while. Fleetwood drummed on one song (“Ask Anybody”).

Winwood played and sang on four and Eric Clapton contributed lead guitar to “The Challenge,” after hearing about the album from Winwood. McVie said she “really just invited [Clapton] to come up and vacation in Montreux” where she was recording in Mountain Studios at the suggestion of Queen‘s manager, “but it’s difficult to keep him out of the studio once he gets there,” she said.

Christine McVie did not sell like Fleetwood Mac releases – or even or Nicks’ or Buckingham’s – but it was a respectable success, hitting No. 26 on the Billboard 200 and scoring at Top 10 single with “Got a Hold on Me,” which was also No. 1 on Billboard’s Rock and Adult Contemporary charts.

She didn’t intend to tour on her own, but changed her mind when solo projects by Buckingham and Nicks kept Fleetwood Mac on hold.

Watch Christine McVie’s Video for ‘Got a Hold on Me’

McVie assembled a band with Sharp, Burnette and then-boyfriend and future husband Eddie Quintela, and played shows that included nine songs from the album and a generous selection of her Fleetwood Mac favorites – including deep cuts such as “Just Crazy Love” and “Spare Me a Little of Your Love.”

“It’s very different from when Fleetwood Mac tours,” McVie noted. “It’s a lot smaller scale. We’re not doing the limousine treatment this time around. This is something I haven’t done in a while, playing in small places. This is a bit like the old days, actually. It’s quite fun to do. However, it’s nothing I’d take on as a career.”

Two decades would pass before 2004’s In the Meantime, released while she was on the break from Fleetwood Mac. This 12-song follow up was co-written mostly with her nephew Dan Perfect, who co-produced with McVie and longtime Fleetwood Mac studio hand Ken Caillat. Burnette returned for one track (“Givin’ It Back”), and Tom Petty and the Heartbreakers drummer Steve Ferrone sat in.

As with Christine McVie, the underrated In the Meantime was somewhat accidental. “I didn’t start off with the intention of making a record at all,” McVie said at the time. “Quite strictly for my own amusement I started writing with my nephew Dan. There seemed to be an accumulation of kind of interesting songs, and word got spread amongst certain friends in the business and one thing led to another and people suggested I put a CD together. I’m not planning on resurrecting my career as such. I just thought, ‘Well, why not?'”

McVie rejoined her old band 10 years later, and stayed through Fleetwood Mac’s most recent tour in 2018-2019. She’d released the solo compilation Songbird this past June with a new orchestral version the title song, an old Fleetwood Mac favorite.

Pictures from throughout the career of Christine McVie.

Why Don’t More People Like This Fleetwood Mac Album?