How ‘Continental Divide’ Showed What John Belushi Could Have Done 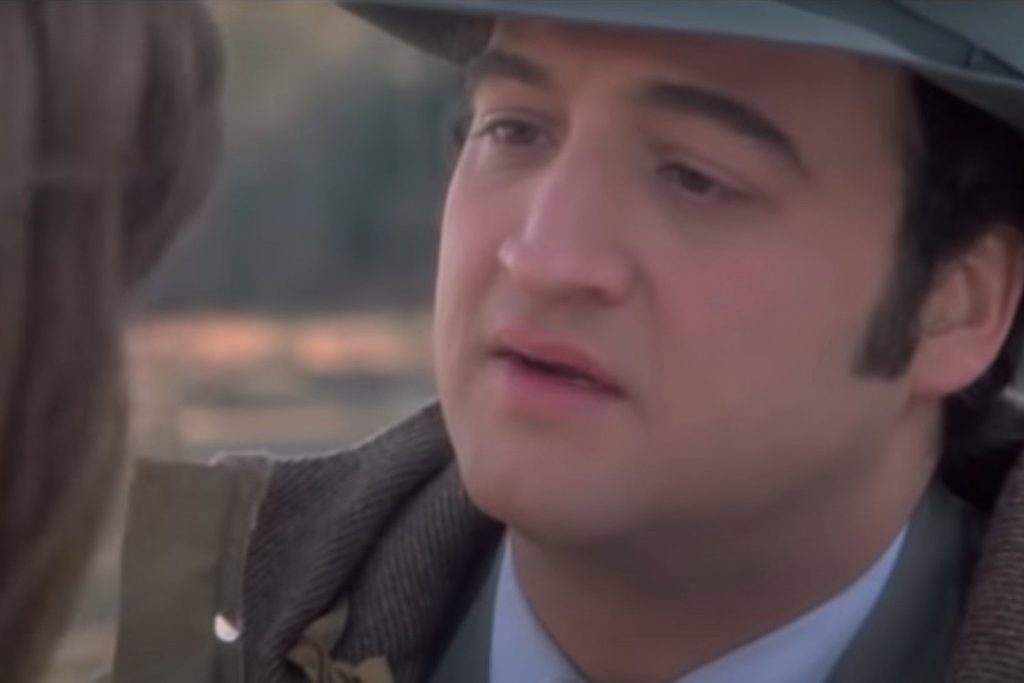 John Belushi is often remembered today for his bombastic on-screen performances, and a fatal overdose that seemed to signal an end of an era of excess.

It’s unfortunate, because that obscures the true depth of Belushi’s talent, which was only beginning to become apparent at the time of his death. Continental Divide, which premiered on Sept. 18, 1981, hints at the path not taken.

The script for the film was one of the first sales made by Lawrence Kasdan – who, like Belushi, was enjoying a stratospheric rise into Hollywood superstardom at the time. After laboring for years as an ad man, Kasdan finally found a taker for his first script in 1977 – but the movie would languish in development hell until 1992 when Whitney Houston and Kevin Costner finally starred in The Bodyguard.

Kasdan then sold the script for Continental Divide to Steven Spielberg. Not only was the film the first one to be produced by Spielberg’s new company Amblin Entertainment, it also paved the way for Kasdan to write Raiders of the Lost Ark for Spielberg, and to do a rewrite of the script of The Empire Strikes Back for Spielberg’s friend George Lucas.

The talent involved in Continental Divide didn’t stop there: To helm the film, Spielberg brought in English director Michael Apted, who had just scored an enormous success with Coal Miner’s Daughter, a biopic about singer Loretta Lynn that had won Oscars for Best Motion Picture in the musical or comedy category, and Best Actress (for Sissy Spacek).

Continental Divide tells the story of a Chicago newspaperman named Ernie Souchak (Belushi), famous for breaking stories about corrupt politicians in his city. When his latest story gets him beat up by a pair of cops at the behest of a local alderman, his editor convinces Souchak that a change of scenery might be the best path to continued health. Souchak heads to Wyoming to do a story on a reclusive wildlife biologist named Nell Porter (Blair Brown), who makes her living studying bald eagles high in the Rocky Mountains.

Watch the ‘One Condition’ Scene From ‘Continental Divide’

Souchak and Porter initially hate each other, but they soon begin to fall in love. Their affair is interrupted, however, by the fact that Souchak has to return to Chicago to file his story. He also wants to continue his journalistic pursuit of the alderman, who has killed one of Souchak’s prime witnesses. Porter soon comes to Chicago to present her research in a lecture at a museum, and the two begin the affair again.

When it’s time for Porter to head back to Wyoming, Souchak jumps onto the train with her. Initially, he declares that he’s only going as far as Cedar Rapids, but then he ends up staying aboard for the whole trip. They know that their professions mean this relationship is going to be complicated, but the couple chooses to get married anyway. Continental Divide ends with Souchak climbing aboard a train headed back to Chicago, and Porter assuring him that she’ll see him when the snow melts and she can come back down out of the mountains again.

A native Chicagoan with a natural Midwestern style, Belushi was an obvious fit for the role. He was also family friends with the Chicago newspaperman Mike Royko, on whom the character of Ernie Souchak was loosely based. But most importantly, he was a huge name in Hollywood. After exploding into the public eye as one of the original cast members of Saturday Night Live, he had moved into film, scoring hits with 1978’s Animal House and 1980’s The Blues Brothers.

But there were also risks in the casting choice. Could Belushi pull off a roll that didn’t involve the oversized theatrics of his SNL characters or the comedic bluster of his other film roles? Could he play the relatively straight-ahead lead in a romantic comedy?

The answer was a resounding yes, although the film was something of a flop. Despite the big names behind it, Continental Divide has few traces of the sparkling dialogue and beautifully crafted scenes that marks Kasdan’s best work, little of the assured power that Apted can bring to a film, and virtually none of the homey magic with which Spielberg seemed to imbue almost everything he touched in the ’80s.

It’s certainly not a terrible movie, but nor is Continental Divide an exceptional one. It is, instead, pleasantly diverting. One knows what’s coming in virtually every scene, and there’s little to set it off from many other similar films.

That’s also exactly what cements its place in helping show why John Belushi’s story is one of the great tragedies of American comedic cinema. His performance in Continental Divide is that of a lovable grump, full of what Roger Ebert described as a “surprising tenderness and charm.”

In other words, Belushi plays it straight and pulls it off perfectly. One would never know, just from watching the movie, that he is anything other than a likable comedic actor with lots of upside. There is no indication that he is also one of the great madcap comedians of the previous decade, nor that he could (as he did with The Blues Brothers) convincingly front a Chicago rhythm-and-blues band featuring the likes of Steve Cropper and Donald “Duck” Dunn of Booker T and the M.G.’s.

Had he not died of an overdose in March 1982, six months after Continental Divide opened in theaters, there’s plenty of reason to believe Belushi would have escaped the frequent Hollywood fate of being pigeonholed as “just” a comedian. The film makes clear that he could have gone on to develop into an actor of greater than average depth and range.

He is not simply funny in Continental Divide, or churning out bits; he’s malleable, scared of Wyoming bears, unintimidated by Chicago politicians, and falling convincingly in love. Out of all the talent assembled to bring this movie into being, John Belushi is the only one who holds up his end of the bargain.