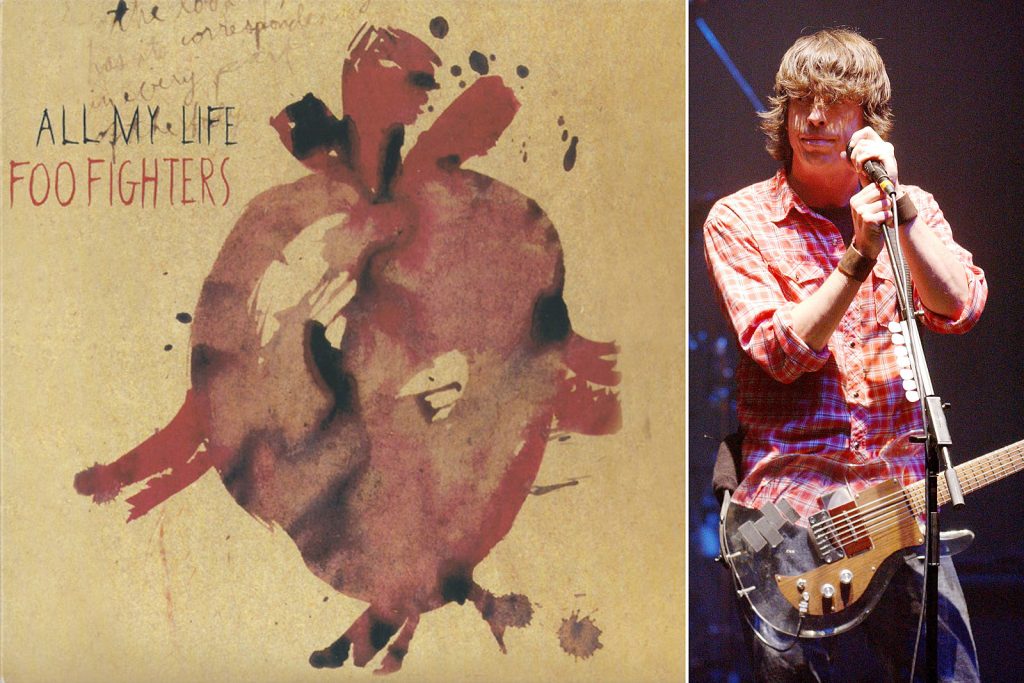 “All My Life” ranks among Foo Fighters’ most popular songs. Still, decades after its release, some fans may not know about its dirty inspiration.

The single arrived on Sept. 24, 2002 at a unique time in the band’s history. While on tour in the U.K. to perform at a 2001 festival, drummer Taylor Hawkins suffered a drug overdose that left him in a coma. With the Foo Fighters on hold, frontman Dave Grohl accepted an invitation to drum for Queens of the Stone Age on their album Songs for the Deaf. Foo Fighters eventually reassembled in October 2001 to work on their next album, but the sessions went poorly.

Part of the problem came down to their own popularity. Foo Fighters’ previous album, There Is Nothing Left to Lose, was a huge success behind such un-abrasive tunes as “Learn to Fly” and “Next Year.” Grohl’s personal musical tastes, however, remained more loud and aggressive. In those initial sessions, Foo Fighters found themselves caught between what they wanted to record and what they felt fans wanted to hear.

“I don’t think we were really ready yet,” Grohl told Spin in 2016. “We basically made what Taylor called ‘the million-dollar demos.’”

While Foo Fighters were experiencing growing pains, Grohl was also in the midst of a tumultuous personal life. his first marriage had ended in a 1997 divorce. Over the next few years, Grohl was romantically linked to many notable women, including Veruca Salt’s Louise Post, actress Winona Ryder, snowboarder Tina Basich, actress Kari Wuhrer and Hole’s Melissa Auf der Maur.

Grohl was also known to enjoy the company of the occasional groupie. In a 2002 interview, he described such instances as “a mutual agreement. [Groupies] come to the back. They know what they want; they know what the band wants. It just happens. It’s that easy. It happens every now and then.”

These varying parts of Grohl’s personality – the rocker looking to make noise, the romantic looking for love, the single celebrity looking for sex – would combine on “All My Life.”

Watch the Music Video for ‘All My Life’

“At first, it was really dissonant and noisy,” Grohl told Kerrang. “The middle section sounded like ‘Wipeout.’ It was just nuts! We recorded the instrumental and I had no idea how I was gonna sing it.”

The track started with a simple guitar line before exploding into a blitzkrieg of sound. Meanwhile, the vocals varied from loud singing to all-out screaming, creating arguably the heaviest song in the Foo Fighters’ arsenal. For Grohl, “All My Life” reflected some of his earliest influences.

“I have mountains of riffs that are reminiscent of everything I grew up listening to from Black Sabbath to Mercyful Fate or whatever,” he explained. “I grew up listening to that, but the rest of the guys didn’t and a lot of the time I’d take a riff and I’d think, ‘That’s fucking bad ass!’ and try to turn it into a Foo Fighters song and it wouldn’t necessarily work.”

“That song is a little dirty,” Grohl confessed to Q Magazine in 2003. “I’m very fond of giving oral sex to women. It’s a pleasure-giving experience – giving someone something that they’ll remember for the rest of their lives, and if you do it right they will.”

Despite its adult subject matter, “All My Life” found a massive audience. The song spent 10 weeks at No. 1 on Billboard’s Alternative Airplay chart and scored a Grammy award for Best Hard Rock Performance. It has since become one of the band’s most played songs in concert, with Foo Fighters performing it more than 750 times according to Setlist.fm.

Just because they’re famous doesn’t mean they don’t get scared.