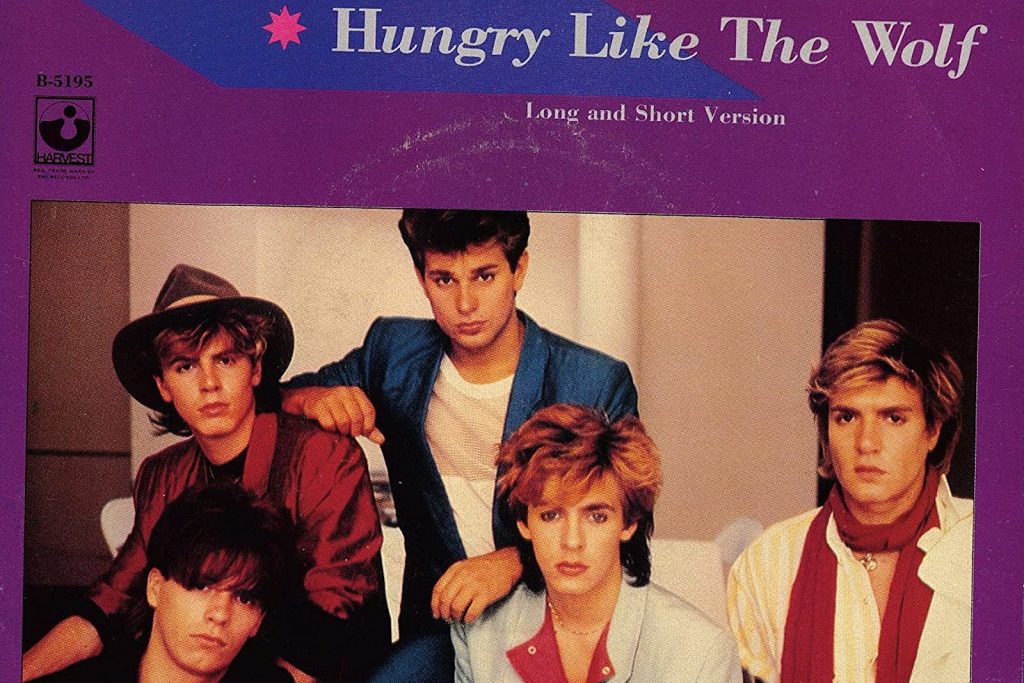 On May 4, 1982, Duran Duran released the first single from Rio, “Hungry Like the Wolf.” The song would become one of their signature tunes — although it didn’t take an easy road to setlist immortality.

In hindsight, however, “Hungry Like the Wolf” sounds like an instant classic. After beginning with a stair-step drum and a hearty (if mysterious) giggle from a woman, the song takes off like a rocket. Andy Taylor’s nervy, glammy guitar riff provides an anchor for Nick Rhodes’ keyboards, which bubble like a frothing cauldron in the background. Roger Taylor provides calm and collected drumming — albeit drumming punctuated by explosive accents and syncopation that add punch — alongside a buoyant bass groove from John Taylor.

Singer Simon Le Bon, meanwhile, draws on his acting background for a vocal performance full of emotive drama. With lyrics said to be inspired by the nursery rhyme “Little Red Riding Hood,” he sketches out a scenario based around romantic pursuit: “In touch with the ground / I’m on the hunt I’m after you / Scent and a sound, I’m lost and I’m found / And I’m hungry like the wolf.” Elsewhere, Le Bon tosses off one of his usual highly quotable quips (“Strut on a line, it’s discord and rhyme“) as well as wordless, do-do-do vocals and an earworm of a melodic hook.

For good measure, “Hungry Like the Wolf” also boasts an intrigue-filled bridge with smoldering guitar, moody keyboard atmospherics and Le Bon emphasizing the title with an eyebrow-raised growl. Not only did this brief break show off Duran Duran’s gift for arranging, but it also created emotional tension that made the song’s big-finish denouement sound even more massive.

Writing-wise, “Hungry Like the Wolf” came together quickly, during a Saturday session in London at EMI’s Manchester Square basement studios. Certain members of Duran Duran had been out late the night before — Rhodes, for one, remembers being hungover the next day — but the whole band dutifully turned up to work on music.

That day, Rhodes’ keyboard of choice was the powerful Roland Jupiter-8. Using the synth’s arpeggiator, he came up with some chords, and then combined these elements with a sequencer and programmed beats from a Roland TR-808 electronic rhythm box.

The track’s musical base in turn inspired guitarist Andy Taylor. “As soon as we heard that, we knew we had something, and I started working out a Marc Bolan-ish guitar part, a very Marshall-sounding Les Paul guitar lick, to go on top of it,” he told Blender in 2002. Le Bon was inspired to come up with a vocal melody and lyrics, while the rhythm section of John and Roger Taylor also came up with their parts easily.

“Roger came in and played ’cause he’d just bought some Simmons drums, so that was where he got those big fills from,” bassist John Taylor told the A.V. Club in 2012. “I came in, and they’d been working for maybe two hours, and I just knew exactly what to play. The song was probably written by cocktail hour.”

When Duran Duran moved to London’s AIR Studios to record Rio in early 1982, the band kept the synth framework intact and just re-did the other elements of the already-in-good-shape demo. Rio‘s producer and engineer, the late Colin Thurston, made sure everything sounded in tip-top shape.

“He was a great organizer and arranger,” Andy Taylor told Blender. “We gave him far more ideas and music than the track actually needed, and he was important in the process of whittling them down to the essential elements.” The laughing and moaning heard in the song, meanwhile, were supplied by Nick Rhodes’ girlfriend at the time, Cheryl.

In the U.K., “Hungry Like the Wolf” was issued as a regular single and then a 12-inch featuring an extended “Night Version” that was produced by Colin Thurston and arranged by Duran Duran. (“Night Version” was a colloquial term Duran Duran gave the longer, dance-floor-friendly takes of their songs.) The song debuted on the singles chart at No. 35 — good enough for a May appearance on Top of the Pops — and eventually reached No. 5.

In the U.S., “Hungry Like the Wolf” took longer to become a hit. Upon the release of Rio, the song was issued as a single and received airplay on select rock radio stations. “Hungry Like the Wolf” charted briefly in mid-August 1982 on Billboard‘s Top Rock Tracks chart — and the influential Boston Top 40 station WXKS also playlisted the song after finding the import 12-inch. But widespread radio support remained still elusive.

Still, Duran Duran had more than a few aces up their collective sleeves. The band toured the U.S. in the summer of 1982, both as a headlining act and as an opener for Blondie. The “Hungry Like the Wolf” video — an Indiana Jones-inspired clip filmed in Sri Lanka — was added to MTV in early July 1982. Still a relatively new phenomenon, MTV wasn’t yet in many households but the exposure helped Duran Duran’s fortunes rise.

David Kershenbaum, who had signed Joe Jackson to A&M Records, was commissioned to remix “Hungry Like the Wolf.” Working with members of Duran Duran, Kershenbaum landed on a take that smartly emphasized the vocals and guitars just a bit more, so the song would potentially fit in better on American radio. The Kershenbaum version of “Hungry Like the Wolf” was appended to a new, second pressing of Rio released in the U.S.; in fact, Kershenbaum remixed the entire first side of the LP.

To capitalize on the popularity of dance music, Duran Duran’s label also released the remix-heavy Carnival EP on Sept. 3, 1982, in the U.S. The four-song EP included the “Night Version” of “Hungry Like the Wolf” already issued as a U.K. 12-inch. To make things more confusing, this extended mix was appended to a third U.S. pressing of Rio released later in 1982. “Hungry Like the Wolf” itself was also reissued again in the U.S. as a single, featuring the Kershenbaum mix on one side and the “Night Version” on the other.

The song finally started to connect with American audiences in late 1982, starting on rock radio and then eventually crossing over to the Top 40. Duran Duran performed the song on Saturday Night Live on March 19, 1983, and “Hungry Like the Wolf” peaked at No. 3 on the Billboard Hot 100 a week later, kept from going higher by Culture Club’s “Do You Really Want to Hurt Me?” and Michael Jackson‘s “Billie Jean.”

Over the years, Duran Duran have reinterpreted “Hungry Like the Wolf” as both a punk song and an acoustic number. It’s been covered by the rock bands Hole, Incubus and Muse, ska-punk act Reel Big Fish, hard rockers Asking Alexandria and Korn, and the cast of the TV show Glee. “Hungry Like the Wolf” has also appeared in an Old Spice ad starring Bruce Campbell, and in a spoof of American Idol from Shrek 2.

Looking back, John Taylor marveled at how quickly “Hungry Like the Wolf” came together — and what that said about Duran Duran back at that stage of their career.

“It’s interesting when you’re at that time in your career when you just don’t have to think twice about anything, ya know?” he told The A.V. Club. “I guess you’re always striving to get back to that. It’s that combination of confidence and naïveté, actually, that allows you to just – I call it surfing the zeitgeist. It’s when everything you do is right. You don’t have to think. You’re so plugged into what’s happening.”