How Eagles Turned a Corner With ‘One of These Nights’ 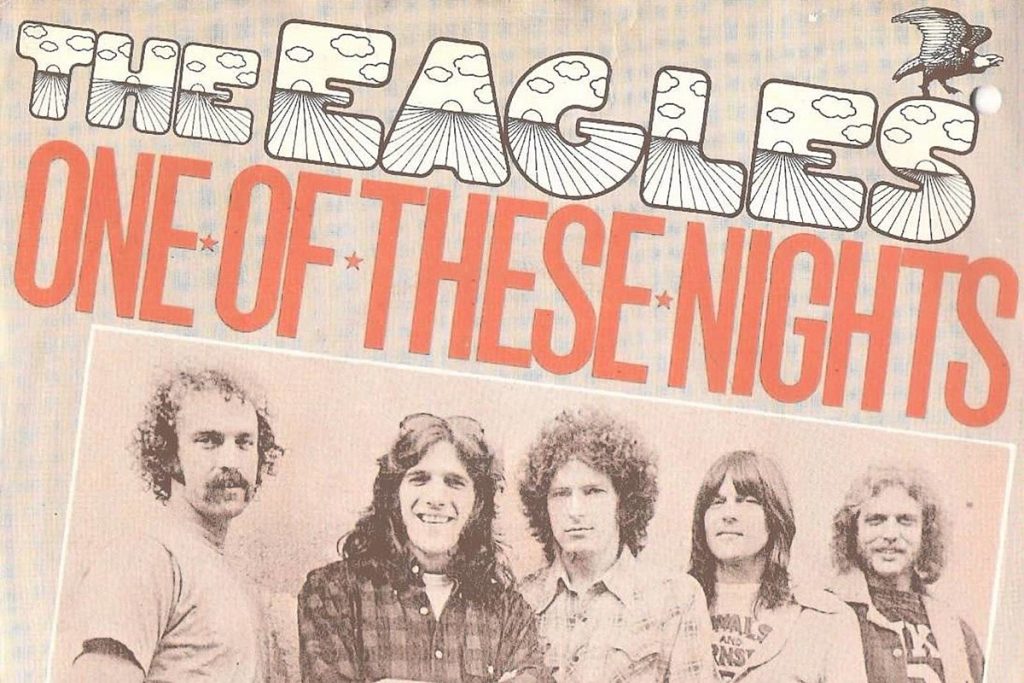 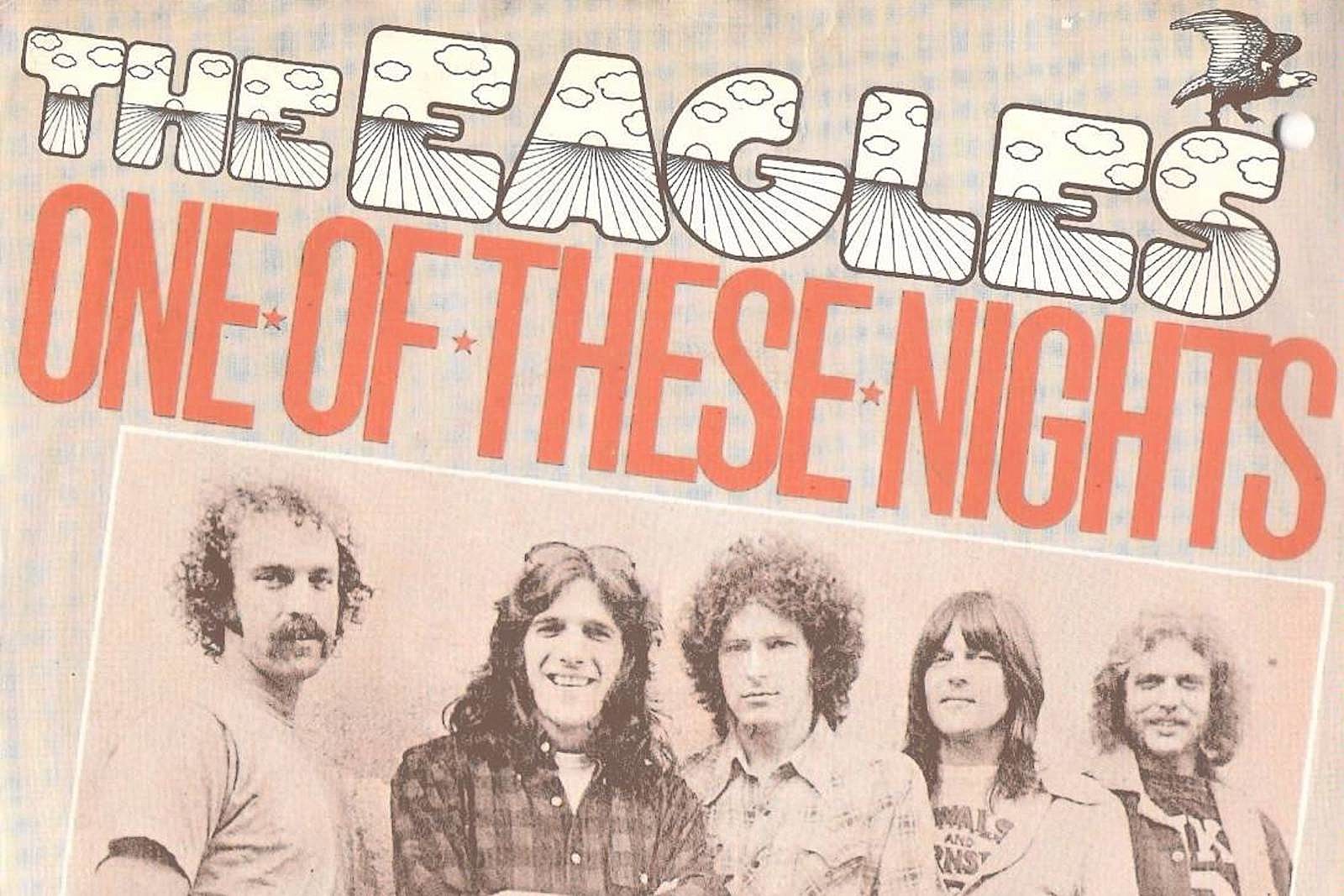 The Eagles wanted to write a ballad, but they didn’t want it to be too ballad-y. They were also all too aware of the contemporary rise of disco but weren’t interested in completely capitulating.

That gave the band’s newly added guitarist a chance to play a critical role in its second No. 1 single.

“We like to be a nice little country-rock band from Los Angeles – about half the time,” co-founder Don Henley told Rolling Stone in 1975. “We wanted to get away from the ballad syndrome with ‘One of These Nights.’ With Don Felder in the band now, we can really rock. He’s made us nastier and did a great guitar solo on the single.”

Felder arranged the slinky bass-and-guitar signature on “One of These Nights,” then took a searing turn on his 1959 Sunburst Gibson Les Paul that underscored the song’s bitter sense of missed opportunities. He also assumed lead-vocal duties on the single’s B-side, “Visions,” for the first of what he openly hoped would be many times.

These tectonic musical shifts prompted the more roots-leaning Bernie Leadon’s quick departure. “He’d never really messed with rock ‘n’ roll guitar, and he never really understood how to get that dirty rock and roll sound,” Henley told Melody Maker in 1975. “Also, Felder can play the banjo and a mean mandolin, so we didn’t lose anything in that area when Bernie left.”

Despite this behind-the-scenes turmoil, there was a sense of expectancy surrounding Eagles, whose preceding 1974 album, On the Border, had produced the No. 1 smash “Best of My Love.” Eagles co-founder Glenn Frey seemed to understand that the group’s sudden success, three albums in, could go away as quickly as it arrived.

“We’ve all said, ‘One of these nights I’m gonna do something – get that girl, make that money, find that house,” Frey later mused. “We all have our dreams, a vision we hope will come true someday. When that ‘someday’ will come is up to each of us.”

Listen to Eagles’ Studio Version of ‘One of These Nights’

They weren’t taking any chances, fashioning a song that spoke deeply to the era.

“We like to call it our ‘satanic country-rock period,'” Henley said in the liner notes to 2003’s The Very Best of the Eagles. “Because it was a dark time, both politically and musically, in America. There was turmoil in Washington, and disco music was starting to take off. We thought, ‘Well, how can we write something with that flavor, with that kind of beat, and still have the dangerous guitars?’ We wanted to capture the spirit of the times.”

Work began during sessions at Criteria Studios in Miami, with Frey on piano. As he played a minor descending progression, Henley came upon the title phrase. “I started the music, Don started the lyrics,” Frey told Rolling Stone. “What usually happens is when we get the thing fused together, he gets involved in the music and I get involved in the lyrics.” They then decamped to complete the backing track at the Record Plant in Los Angeles, where they found a sympathetic collaborator.

“I’d been listening to Spinners and Al Green records when I started writing it at the piano,” Frey told Rolling Stone. “Our producer, Bill Szymczyk, is a real R&B freak. He was a freelance engineer in the ’60s on Aaron Neville’s ‘Tell It Like It Is’ and B.B. King’s ‘The Thrill Is Gone.'”

Henley added a four-on-the-floor bass-drum pattern then favored by disco artists, including the Bee Gees – who happened to be sharing studio time back in Miami. But for Henley, that sound went further back too.

“Glenn and I had always been fans of the records that were produced in Memphis by Willie Mitchell,” Henley told Rolling Stone in 2016. “Especially the Al Green records where the drummer, Al Jackson Jr., would hit the snare and the ride tom-tom at the same time on the backbeat.”

Listen to Eagles’ Live Version of ‘One of These Nights’

As the Eagles returned to Miami to complete the vocal tracking, all that was left to decide was who would sing it. Despite his obvious candidacy, Frey handed the microphone over to Henley.

“We wanted ‘One of These Nights’ to have a lot of teeth, a lot of bite — a nasty track with pretty vocals,” Frey told Rolling Stone in 1975. Years later, in the greatest-hits package liner notes, Frey noted, “We had Don Henley’s voice, which allowed us to go in a more soulful direction – which made me exceedingly happy.”

His multi-faceted performance presented its own challenge in concert. “I get nervous,” Henley admitted in 1975. “My voice has to be just right to hit the high notes. Sometimes I make it, sometimes I don’t. It’s hard to do what I did in the studio on the high hat, and sing at the same time. I almost get myself in a crack, but I do it.”

Whatever the challenges, their timing was perfect. Released on May 19, 1975, the title track from One of These Nights hit No. 1 that August. Eagles ended up selling 4 million copies of their first Billboard chart-topping album, though they remained on a quest for something bigger.

“All our records have the same theme, and that is the search,” Henley later said. “It doesn’t matter if it’s romance, money or security – it’s the act of looking for it. Your whole life is one long journey, and getting there is more important than the journey’s end.”

Just one album later, Eagles reached a career pinnacle with the 26-million-selling Hotel California. Their search was seemingly complete. Yet, “One of These Nights” continued to resonate for Frey.

“We made a quantum leap with ‘One of these Nights’; it was a breakthrough song,” Frey said in The Very Best Of liner notes. “It is my favorite Eagles record. If I ever had to pick one, it wouldn’t be ‘Hotel California,’ it wouldn’t be ‘Take It Easy.’ For me, it would be ‘One of These Nights.'”