How Far Did Van Halen Get Into Their Second Gary Cherone Record? 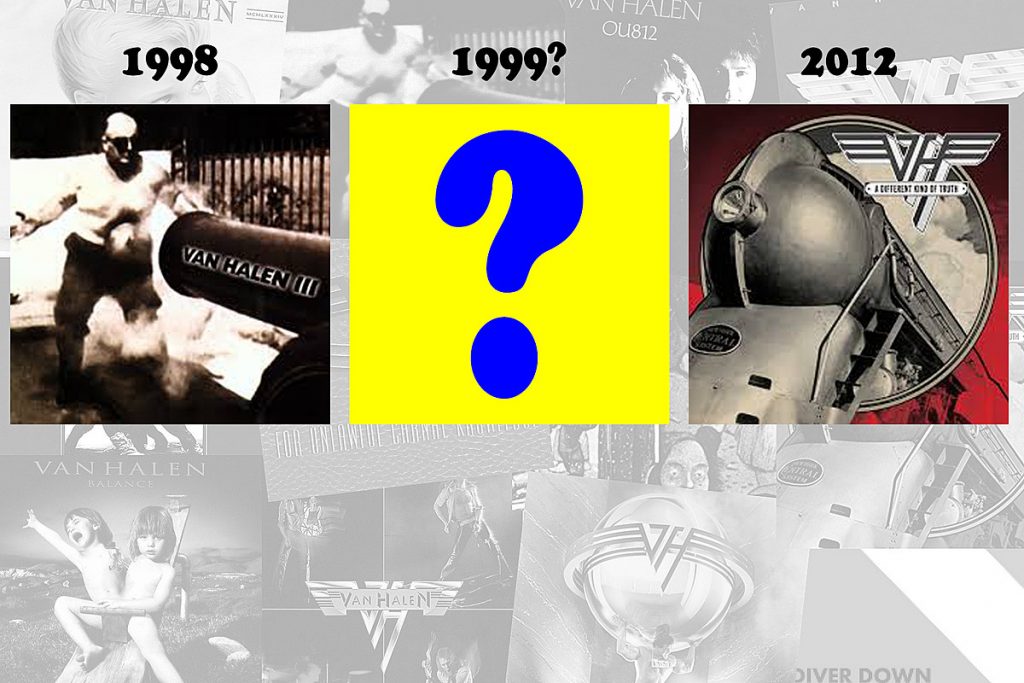 Van Halen were going to give it another shot with Gary Cherone.

Despite the critical and commercial drubbing they took with 1998’s Van Halen III — the band’s first undeniable large-scale stumble — the following spring they regrouped at Eddie Van Halen‘s 5150 Studios to begin work on a second album with the former Extreme singer.

A May 19, 1999, post on the band’s website revealed that Eddie Van Halen, his brother Alex, Cherone and bassist Michael Anthony had worked on demos for seven tracks and written more than 20 new songs together. Cherone described the “four-on-the-floor” “Left for Dead” as “one of the most uptempo songs the band has done,” and explained that the lyrics of “Say Uncle” focused on “a dominant woman and a willing, submissive man.”

“You Wear It Well” was said to have “a stellar tapping intro that sounds like an extraterrestrial on acid,” while “River Wide” was praised for being “groovy, with a dark edge.”

Three months later, a new update declared that the band was working six days a week on the new album and selected Danny Kortchmar as producer. The studio ace was best known for his ’70s work with Linda Ronstadt, Jackson Browne and Warren Zevon, and also served as co-writer, co-producer and musician on Don Henley‘s Building the Perfect Beast and The End of the Innocence albums.

An MTV report from the same day featured Eddie Van Halen praising Kortchmar’s “hands-on approach.” Interestingly, that report also noted that the band had already completed two songs for the new record with Patrick Leonard, a producer and songwriter best known for his work with Madonna.

Leonard’s rock credentials were also in order, as he had recently collaborated with both the David Gilmour-fronted Pink Floyd and solo Roger Waters. “[We] did a couple of songs with him,” Cherone told Rolling Stone in 2012. “It was really good stuff.”

“There were a lot of demos,” the singer explained to UCR in 2016. “We worked with a couple of different producers. All different degrees of production. Most of them were a riff, a rough drum [track], a vocal that I put on — I might have thrown a harmony on it. A couple of songs were fully developed and were the best things that we did.”

In retrospect, Cherone said it wasn’t until they toured together in support of Van Halen III that the foursome gelled into a proper working unit. “I do wish I had made another record with those guys,” he told Rolling Stone. “Once we were on tour, we became a band.”

“I look back on some of those [1999] demos and I go, ‘You know what? This should have been the first record,'” he noted in the 2016 UCR interview. “Because the critique of Van Halen III is that maybe it was a little too different. … Maybe looking back, [III] should have been the second record. After being on tour with those guys and being comfortable, we were doing some demos and it was coming a bit more naturally.”

Cherone also thought the unreleased tracks benefited from producers Leonard and Kortchmar gaining more control over the process. “With Van Halen III, a lot of people say it was an Eddie solo record,” he admitted to Rolling Stone in 2012. “I don’t think that. Mike Post produced it, but it was really Eddie’s baby, and maybe we needed a little more guidance on the album.”

Eddie Van Halen and Cherone were both going through some personal issues at the time, which ultimately kept the record from being released and resulted in the singer’s departure from the group. “I think Eddie started drinking a bit,” Cherone told Rolling Stone. “It wasn’t bad, but it wasn’t going in the right direction. Also, I wasn’t in a great place mentally. I had some things going on in my personal life that affected me. When we broke up, it was mutual.”

It would be five years before Van Halen released new music — three songs recorded with their returning second singer, Sammy Hagar, for the 2004 compilation Best of Both Worlds. Another eight years passed before they finally released a full-length follow-up to Van Halen III, A Different Kind of Truth featuring original frontman David Lee Roth. That album also included the debut of Eddie’s son Wolfgang on bass, replacing Anthony, who’d go on to work with Hagar in Chickenfoot and the Circle.

Following his departure from Van Halen, Cherone formed a new band, Tribe of Judah, which released Exit Elvis in 2002. A few years later he reunited with Extreme, who put out Saudedas de Rock in 2008. He’s also kept busy outside of his main band, forming Hurtsmile in 2007. To date, that group has released two albums, a 2011 self-titled effort and 2014’s Retrogrenade. Extreme are reportedly currently in the process of recording their sixth studio album.