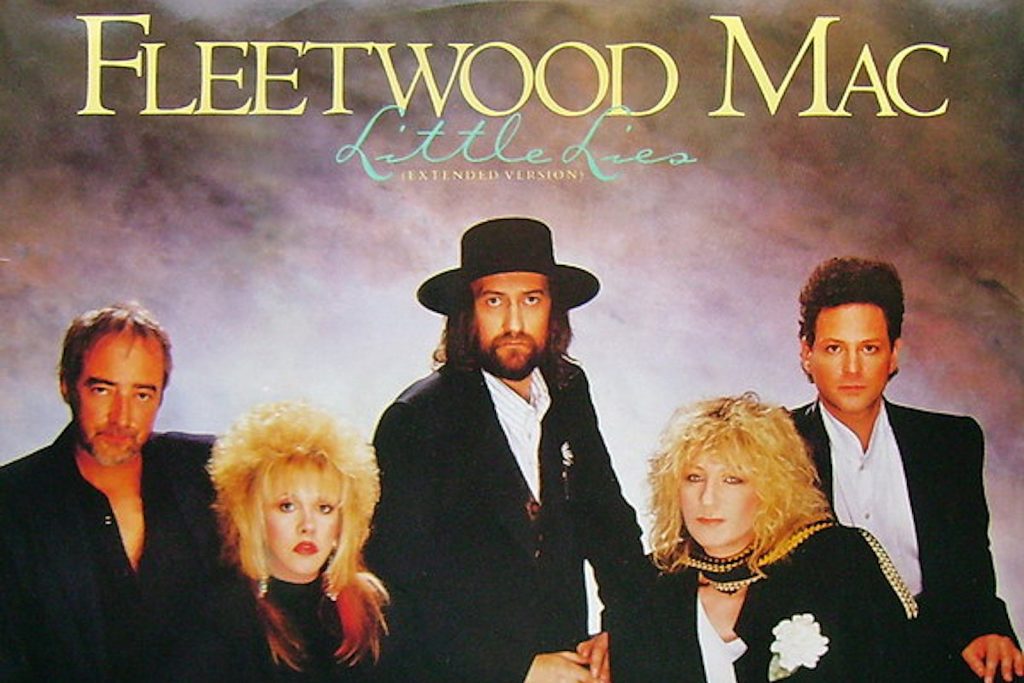 The mid-’80s were both the best and the worst of times for Fleetwood Mac.

Mirage yielded a handful of hits — “Hold Me” and “Gypsy” cracked the Top 20 in 1982 — and a short American tour was completed the same year with little commotion. During a subsequent hiatus, Lindsey Buckingham released another solo album (1984’s Go Insane), Stevie Nicks put out another two (1983’s The Wild Heart and 1985’s Rock a Little) and Christine McVie issued her self-titled solo effort in 1984. Each was generally well received.

This break turned out to be much needed, given that all was not well beneath the surface. Mick Fleetwood filed for bankruptcy in 1984, Nicks was admitted to the Betty Ford Clinic in 1986 to address her cocaine addiction and John McVie suffered an alcohol-induced seizure in 1987. Many wondered if Fleetwood Mac had reached the end of the road – at least as a cohesive unit.

At the same time, however, no one seemed content to allow Mirage to be Fleetwood Mac’s final album. As Buckingham told Creem, “it left a lot of things dangling.”

There was more music to be made, but Fleetwood Mac did not reconvene right away. Christine McVie was asked to record an Elvis Presley cover, “Can’t Help Falling in Love,“ for the 1986 film A Fine Mess. She was backed by Fleetwood, Buckingham and John McVie and they found there was still a spark.

“It was the first time for nearly five years that we’d all been in a working environment together,” Christine later remembered. “We had such a good time in the studio and realized that we still had something to give each other in musical terms, after all.”

Not everything was perfect as Fleetwood Mac began work on their next studio album, Tango in the Night: Nicks was in and out of the picture, promoting her most recent solo album and continuing to deal with substance-abuse issues, while Buckingham’s tendency to take control of production caused some tension.

Christine McVie, divorced from John McVie for a decade, was in a new relationship with Portuguese keyboardist and songwriter Eddy Quintela.

“I wouldn’t like to grow old alone,” she told Rolling Stone in 1984. “Not that I would be alone: I have many good friends that I’ve had for 20 years. If the right guy pops the question, I’ll say yes. I’m living with Eddy right now, and it’s working out really nicely. So who knows? Maybe I won’t get married, but I daresay I’ll be happy.”

They did get married in October 1986, and McVie also found an artistic collaborator in her new life partner. Surprisingly enough, songwriting didn’t always come easy for McVie.

“I started writing songs when I was very young, but I wasn’t very good,” McVie told Harper’s Bazaar in 2019. “In fact, I was quite paranoid about it. Then I joined Fleetwood Mac and Mick encouraged me to keep trying. I wrote all the time during that time and my pop developed into more of a blues style. It was Mick who told me to persevere, and eventually I wrote a few good songs.”

Together, McVie and Quintela penned “Little Lies,” an upbeat number with a surprisingly dark undertow of deceit and resigned acceptance. “If I could turn the page,” McVie sings in the first line. “In time, then I’d rearrange just a day or two.” In the end, the narrator decides to live with the discrepancies, the “little lies.”

Listen to the Extended Version of ‘Little Lies’

The song didn’t appear to be based specifically on her relationship with Quintela, but McVie always said she wrote based on her personal experiences. “I have to be involved in love to write love songs,” she told Attitude magazine in 2019.

“Little Lies” fit in well among the other tracks on Tango in the Night, which also included McVie’s collaboration with Quintela on “Isn’t It Midnight.” “I write for the band once we’re in the studio,” McVie later told Elsewhere magazine, “because then I get a sense of what’s needed for the album. We kick off with maybe three songs and then draw from our various bags of ideas. We can record a song one way originally and then it ends up with a different tempo, a different bridge and so on. We’re fairly adventurous in doing just what we want to do. You have to build it like a sculpture.”

Tango in the Night was produced by Buckingham and Richard Dashut, who leaned heavily on digital tools with engineer Greg Droman. They ran into some issues as the LP was being mastered, however, when manually spliced tapes began to glitch. They corrected the issue, save for one notable instance: “There’s something on one song — I think it’s ‘Little Lies,'” Droman told Salon in 2017. “You could easily say ‘Oh that’s a hi-hat.’ But it’s not. I know it’s not.”

“Little Lies” was released as the third single from Tango in the Night, reaching No. 4 on the Billboard Hot 100 within a few months. For decades, it remained Fleetwood Mac’s most recent Top 10 hit in the U.S. (“Little Lies” also reached No. 5 on the U.K. chart.) A music video accompanied it, featuring the band at a rustic-looking farmhouse.

Tango in the Night was an enormous success, ultimately becoming the band’s second best-selling album behind Rumours. No one knew what the future held – Buckingham, in fact, would soon leave – but songs like “Little Lies” initially proved there was still gas left in the tank. “I’d like to think this record brought all sorts of loose ends together,” Buckingham told Rolling Stone in 1987. “I think the album’s been a healing process.”

We’re focusing on songs that charted separately, rather than so-called “double A-sides.”

Why Don’t More People Like This Fleetwood Mac Album?