How George Clinton Pulled Off the P-Funk Earth Tour 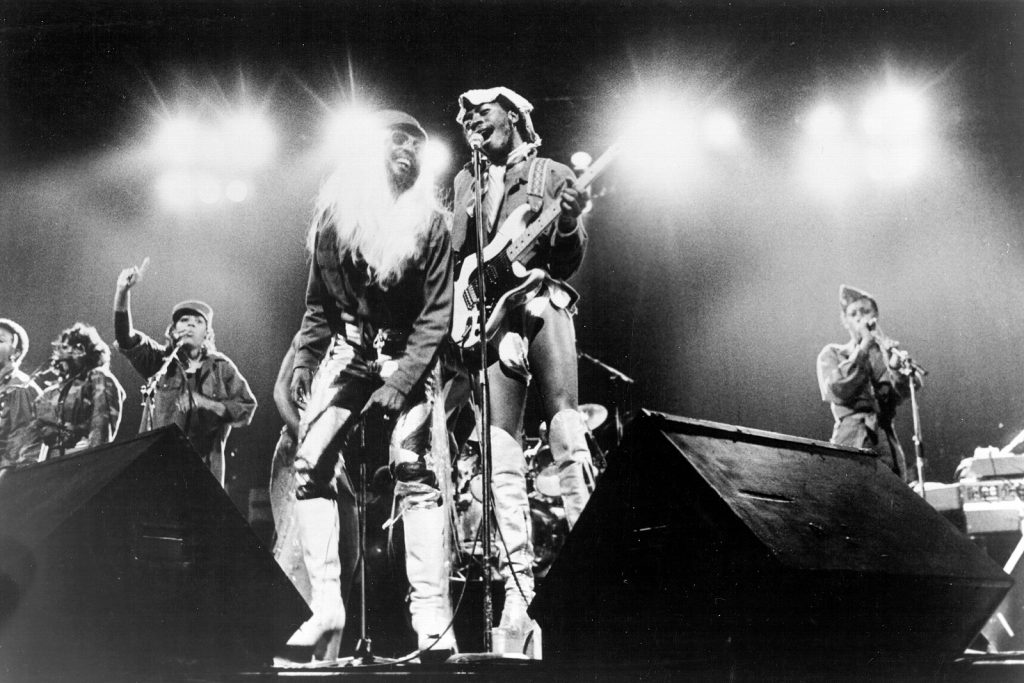 When George Clinton started hatching plans to take his Parliament–Funkadelic crew on the road during 1976, he wanted to more than just put the band on stage to give up the funk, as it were.

“What we were doing was more like staging a play,” Dr. Funkenstein wrote in his 2014 memoir Brothas Be, Yo Like George, Ain’t That Funkin’ Kinda Hard on You? And that’s exactly what Clinton and company created for the P-Funk Earth Tour, a nearly nine-month extravaganza that cost a reported $275,000 (provided by Neil Bogart, whose Casablanca Records was Parliament’s home at the time) and required seven trucks to haul around the staging and scenery created by noted Broadway designer Jules Fisher, who’d also worked with David Bowie, the Rolling Stones and Kiss, among others. “Soul music had never seen anything like it,” Clinton wrote. “For that matter, neither had rock and roll. It was like a Broadway show in the most elaborate sense, or what Las Vegas would become decades later.”

The star of the P-Punk Earth Tour was the Mothership, a concept that had introduced on Parliament’s 1975 album Mothership Connection and was brought into real life by Fisher. It was “summoned” by guitarists Garry Shider and Glenn Goins, the latter of who’s gospel vocals in particular brought the structure down from the rafters amidst lighting effects and pyrotechnics, with Clinton emerging in full Dr. Funkenstein guise to “administer the funk” to the crowds.

The show took a great deal of work to pull off, including several weeks spent rehearsing and choreographing in an airport hangar in Newburgh. N.Y. Two stages were set up at the time, one for Parliament-Funkadelic, the other for bassist Bootsy Collins, who would be playing with his own Rubber Band as well as with the P-Funk Mothership during the trek. Interestingly, some of the equipment came from Aerosmith’s most recent tour. “Rehearsing for the Mothership tour was like deploying an army,” Clinton remembered. “Because of all the equipment, all the lighting cues, and the complexity of the staging, it was important to hit certain spots in certain songs at exactly the right time.” It also required a change in attitude — and some behaviors. “You couldn’t be as crazy high as you used to be, in the psychedelic sense,” Clinton noted.

Watch the Mothership Land Live in 1976

There was also an effort to make sure the Mothership and attendant staging didn’t eclipse the band. “To pay off the stagecraft, we had to make sure that we were just as impressive musically,” Clinton wrote, adding that the ensemble “rehearsed with a degree of professionalism that was, at least in our history, unprecedented.” The group certainly had the goods, with a dozen albums of material between Parliament and Funkadelic – including the latter’s then-new Hardcore Jollies, its first major label effort, for Warner Bros. Records. Saxophonist Maceo Parker, late of James Brown‘s band, was on board as music director, with a potent troupe of players that including additional guitarists Michael Hampton and Eddie Hazel, keyboardist Bernie Worrell, a brass section arranged by Worrell and Fred Wesley and backing vocalists Dawn Silva and Lynn Mabry, who would go on to become the Brides of Funkenstein.

Some changes were made over the course of the tour. Because the band and music were indeed eclipsed by the Mothership, the group moved its arrival to later in the show. It also did away with a mini-Mothership that flew over the crowd before the big Mother(ship)’s arrival. And while Collins — hot with his Stretchin’ Out in Bootsy’s Rubber Band and, later, Ahh…The Name is Bootsy, Baby! albums — was put on as the closing act for some early shows, he quickly learned that following the Mothership was no easy task and settled into the middle spot between Parliament-Funkadelic and opener Sly Stone with his latter-day Family Band.

The P-Funk Earth Tour lost money, much to the consternation of musicians who went unpaid, and there were, of course, technical snafus. “The Mothership was almost a band member in its own right, subject to quirks and tantrums like anyone else in the band,” Clinton recalled. Clinton also received some backlash from black and black Muslim activists for working with white promoters – until they learned that 25 cents from every ticket was being donated to the United Negro College Fund and backed off.

But the trek was a success by all other measures. Rolling Stone declared it “a Space Age Mardi Gras,” and the trek drove sales for the attendant albums; Hardcore Jollies reached No. 12 on the Billboard R&B chart; Parliament’s The Clones of Dr. Funkenstein hit No. 3 and No. 20 on the Billboard 200, going gold; and Collins’ albums both went Top 10 on the R&B charts, with Ahh…The Name is Bootsy, Baby! hitting No. 1 and also going gold. The tour yielded Live: P-Funk Earth Tour in May of 1977; Recorded at shows in Los Angeles and Oakland, Calif., it too went gold and peaked at No. 6 on the R&B chart.

The Mothership, meanwhile, went on to have its own life after the P-Funk Earth Tour. Retired after that, its whereabouts were unknown for many years, said to be in a scrap metal yard in Maryland. A smaller, reconstructed version was created for Clinton’s Mothership Reconnection Tour during 1996 with the P Funk All Stars and would be used periodically in through the troupe’s appearance at Woodstock 1999. It now resides in the Smithsonian Institution’s National Museum of African American History and Culture, while the Oakland Museum of California created its own replica for its Mothership: Voyage into Afrofuturism exhibit that runs through Feb. 27.

We count down the albums released by George Clinton’s two revolving groups.