How George Harrison Foiled One of Slash’s Musical Ambitions 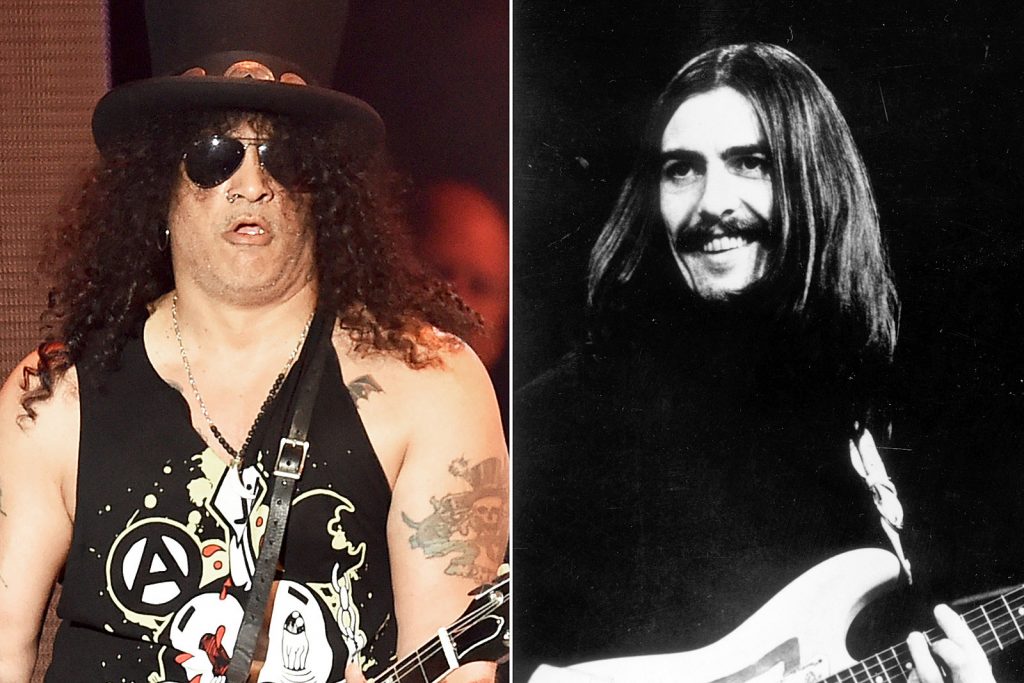 Slash lamented that he couldn’t get away with using more sitar in his music — because it immediately sounded like the Beatles.

George Harrison popularized the Indian instrument in the West after playing it on a number of Beatles tracks, and his studies with master performer Ravi Shankar drew even more attention among Western artists.

Slash used a sitar in the track “Spirit Love” on recent solo album 4 — but in a new Music Radar interview, the Guns N’ Roses guitarist admitted it was hard to avoid the Harrison comparison. “I laughed because, when you said George Harrison, that was the one thing I was trying for it not to sound like!” he told interviewer Jonathan Horsley. “It’s true, though! That’s what happens whenever you record sitar; it just becomes that cliche.”

He continued: “I think I got away with it this time. There are other times where it has come up. I have a real double-gourded sitar that I got from India but I can never use it because any time I have ever even attempted to record with it it just sounds so Ravi Shankar.” Slash hoped his approach made the instrument sound different enough. “I recorded the sitar through my Marshall, the same setting as my guitar, so it sounds like a sitar but it also sounds like a fucking monstrous sitar or something,” he explained.

Elsewhere in the interview, Slash argued that studio technology was pushing the recording process too far away from the spirit of rock ’n’ roll. “The human dynamic of people working in the moment, and especially working as an ensemble, there is a lot of little things that go on,” he said. “There is a lot of communication […] that really comes across in the playing and the way it sounds, and what we have got into the habit of doing is just producing everything to the point where there is nothing organic about it.”

He allowed that the tech-heavy approach worked for some genres of music, but not rock. “I mean, the advent of the hard drive made people go crazy, and people were making records from all corners of the Earth […] We were all sending them in; ‘Isn’t this great!?’ And that was the novelty of it, and I think it has worn off and we are starting to realize that the integrity of the music is totally lost in this fascination with the ability to do that.

“I think for rock ’n’ roll, all of the greatest rock records, for the most part, are done pretty much in a live setting, or in a very stripped-down, raw setting where everybody is playing more or less together, and I think that is something that comes across in what you’re hearing. You can’t put your finger on it. It’s there, and it’s something that makes records exciting. Being in a rock ’n’ roll band is to be able to go in and be as good as any of those people that didn’t have the luxuries of what we have today, where they only had three takes and they were out!”