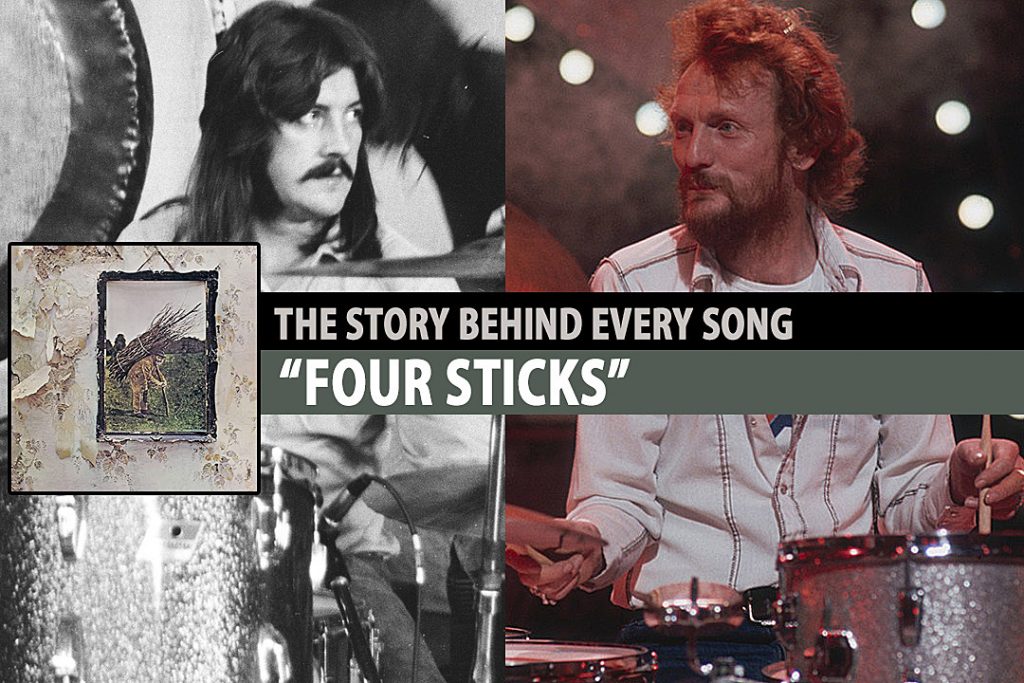 The sixth track on Zep’s untitled fourth album was born out of a combination of iron will, brute force and a dash of arrogance. The Eastern-influenced raga-rock tune pushed the band members to the brink creatively and physically, as they muscled through constantly shifting time signatures and employed never-before-used playing techniques to commit the song to tape.

“Four Sticks” opens with Jimmy Page‘s entrancing, repetitive guitar riff before veering into a shimmering acoustic passage that’s fleshed out with John Paul Jones‘ cutting-edge VCS3 synthesizer, which had only been introduced two years earlier. The song fluctuates between 5/8 and 6/8 time signatures, which proved immensely difficult to nail in the studio. (The challenge had its upside: The band took a break from recording “Four Sticks” and, in their quest to blow off steam, accidentally concocted the classic “Rock and Roll,” which they would issue as a single with “Four Sticks” as the B-side.)

The breakthrough moment for “Four Sticks” came on Feb. 2, 1971, the day after drummer John Bonham went to the Lyceum in London to watch his hero, Ginger Baker, square off against jazz titan Elvin Jones in a highly publicized drum battle. Baker, the Cream and Blind Faith alum who was playing with Ginger Baker’s Air Force at the time, was not shy about asserting his own greatness or slagging off his musical peers, including Bonham. “Keith Moon? John Bonham? No, I wouldn’t put them in the same frame,” Baker once said. “They were drummers, but they weren’t in any way exceptional in my opinion.”

Criticism notwithstanding, Baker and Jones’ legendary drum battle lit a fire under Bonham, fueling his studio performance the following day. He sloshed back a can of Double Diamond beer, picked up two sets of drumsticks — inspiring the title “Four Sticks” — and proceeded to obliterate his kit.

“We’d tried the number and he’d been playing it in a regular pattern. But we were gonna re-cut it [and] have another go at it,” Page told Mick Wall in his 2008 Zeppelin biography When Giants Walked the Earth. “[Bonzo] had been to see Ginger Baker’s Air Force and he came in and he was really hyped about it. He liked Ginger Baker but he was like, ‘I’ll show him!’ And he came in and he picked up the four sticks and that’s it, we just did two takes of it. Because that’s all we could sort of manage. But it’s astonishing what he’s doing. He’d never employed that style of playing before. I can’t even remember what it was called, what the working title was. But it was sure as hell ‘Four Sticks’ after that. Bonzo just took it into another stratosphere.”

Led Zeppelin only attempted “Four Sticks” in concert once, on May 3, 1971 at the K.B. Hallen in Copenhagen. (“We’ll try something we’ve never done before,” Robert Plant prefaced the performance. “There’s every chance that we will fall apart.”) Early the next year, as they returned from an Australian tour, Page and Plant sojourned in Mumbai, India (formerly known as Bombay), where they linked up with the Bombay Symphony Orchestra to record new versions of “Four Sticks” and the Led Zeppelin III cut “Friends.”

“I had a contact via Ravi Shankar and was put onto somebody who got the musicians together,” Page told Wall. “We went to a studio and all they had was a Revox [reel-to-reel tape recorder]. But the musicians were so fast! In fact, ‘Four Sticks’ was difficult for them because there were lots of changes in the timings. But we also did ‘Friends’ and that was astonishing. I had given them a sort of reward of a bottle of scotch after we’d done ‘Friends,’ cos all we were gonna try was the one number. And they’d all had a tipple and I think they fell apart a bit.”

Page confessed that even though he’d always dreamed of recording with a symphony orchestra, he had no idea how he and Plant would pull off the endeavor. “It was purely an experiment to see how we would get on recording like that,” he said. “One of the things that we always wanted to do was to actually go around doing concerts in places like that and Cairo, going all the way through Asia. Well, the closest we ever got to it was going to Bombay. George Harrison had done the things he did with the Beatles but no one had actually worked with any of the musicians from India, got a proper orchestra together. It would have been great.”

Page and Plant would unearth “Four Sticks” decades later on their 1994 No Quarter: Jimmy Page and Robert Plant Unledded album and ensuing 1995-96 world tour. Plant has kept the song in his solo repertoire as well, performing it live as recently as 2018. Led Zeppelin finally released the Bombay Symphony Orchestra version of “Four Sticks,” renamed “Four Hands,” on the 2015 reissue of their Coda compilation. The sublime, hypnotic performance further demonstrates the breadth of Led Zeppelin’s influences and their constant quest to expand their sound on their path to becoming the biggest rock band in the world.