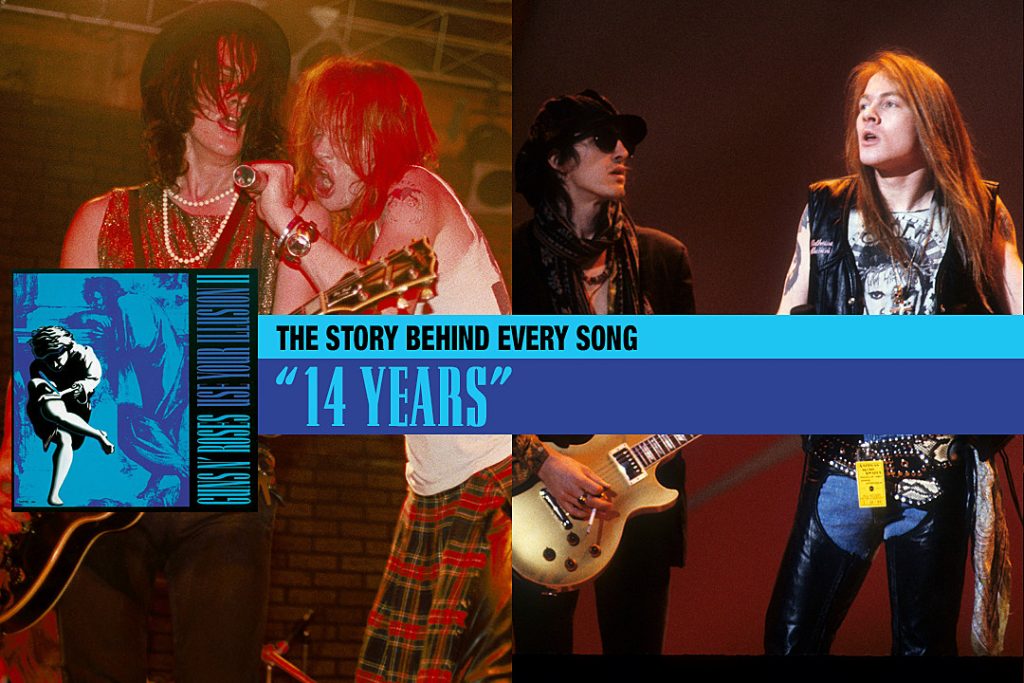 Axl Rose and Izzy Stradlin decided to make like Dr. Frankenstein after they both wrote songs titled “14 Years” for Guns N’ Roses‘ Use Your Illusion albums.

“Axl Rose phoned me up and said he’s written a song called ’14 Years’ too, which is a really bizarre coincidence,” Stradlin recalled in a 1991 interview with Vox (as transcribed by Appetite for Discussion). “So, when he said that, I told him, ‘Well maybe we should use mine, because it’s already finished and we can get on with these fucking albums and get them out sometime in 1991.”

Rose agreed to record Stradlin’s version of “14 Years,” but ultimately the duo decided to add elements of Rose’s version into the finished product. “He sang me parts of his song,” Stradlin said, “and we made them like a bridge or a chorus or something.”

Stradlin handled lead vocals on the track, just as he did on “Dust N’ Bones,” “You Ain’t the First” and “Double Talkin’ Jive” from Use Your Illusion I. “14 Years” ended up as the second track on Use Your Illusion II and was played fairly regularly on tour until Stradlin quit the group in November 1991.

“During the last three months I spent on tour with them, it was growing increasingly tough for us to get onstage on time and finish a gig without some sort of interruption,” Stradlin told Guitar Player in 1993 (as transcribed by Snakepit.org), referencing Rose’s habit of starting shows late and storming off the stage if things weren’t going to his liking.

“Things were just out of control. In the early days I had some sort of balancing factor in the band, and we’d discuss things,” Stradlin added, “but towards the end, I was less and less spoken to about decisions. I’m sure a lot of it was my own doing, because those last few months were so chaotic that I took a sideline position. I didn’t want to be wrapped up in all the madness.”

Many people interpreted “14 Years” as an angry kiss-off to Rose in the wake of Stradlin’s departure from Guns N’ Roses, as he and the guitarist had been friends for roughly that long when the song was written: “This time I’ll have the last word / You’ll hear what I say / I tried to see it your way / It won’t work today.” But when introducing the song to a Los Angeles audience in July 1991 (as reported by Guns N’ Roses Central), Rose said, “this is for all of those who have the impression that we’re any form of an overnight success.”

Stradlin never returned to Guns N’ Roses full-time, and he was notably absent from the group’s 2016 reunion, but he’s occasionally joined the band on stage. The guitarist filled in when replacement Gilby Clarke broke his hand in 1993, embarked on a six-week tour with the group’s new lineup in 2006, and sat in again for a handful of shows in 2012.

Rose and Stradlin ended up performing “14 Years” together at six concerts in 2012, Setlist.fm reports, suggesting that the song’s subject matter wasn’t a point of contention.

Slash Explains How Guns N’ Roses Got Together