How I Learned to Love Axl Rose: Commentary 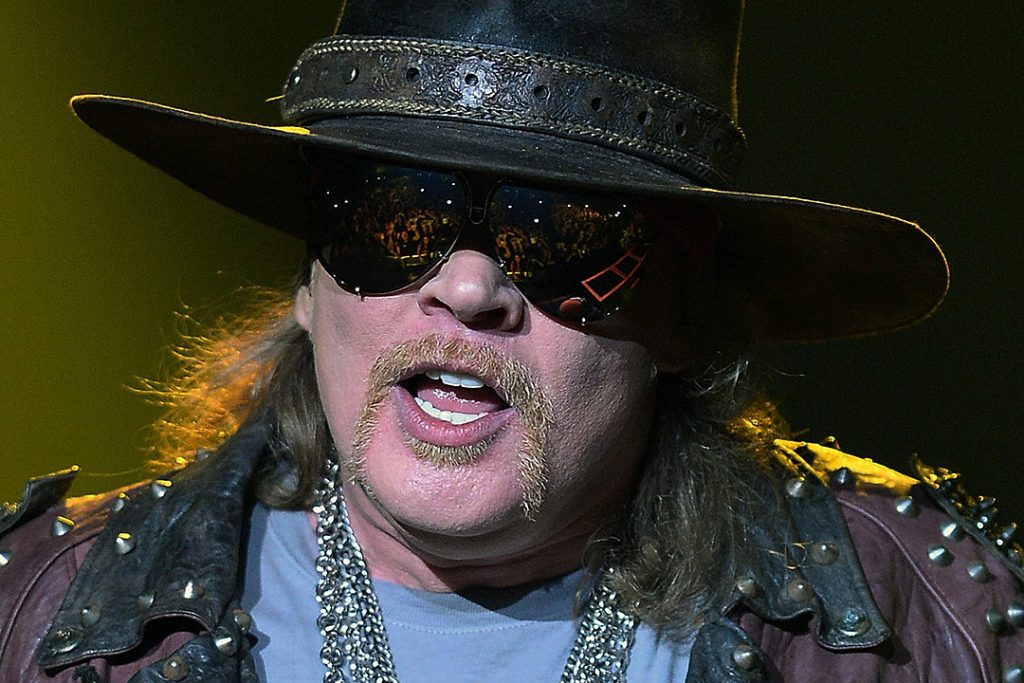 When you’re lead singer with the “most dangerous band in the world,” you can be forgiven for behaving in an eccentric manner. It’s more or less expected of you. But in the world of rock eccentrics can be embraced and celebrated, while less or no focus is given to why the eccentricities exist. So it is, I’d say, for Axl Rose – a person who, it seems to me, spent many years failing to outrun the thing he was trying to escape from.

The stories are well-known: the bad timekeeping, the controversial lyrics, the reclusive tendencies, the difficult attitudes, the angry collapse of Guns N’ Roses, his rejection of induction into the Rock & Roll Hall of Fame and his refusal to let go of the band’s controls. At one point, the idea of working with Slash and Duff McKagan again was a pipe-dream – and yet, now that it’s happened, it seems like the most obvious happy ending in the world.

As I assembled an article collecting “60 quotes for 60 years” to mark Rose’s birthday, I found myself thinking about him differently. In the past it was easy to dismiss him as a victim of his own making, a flake who possibly even played it up, with an inability to care about anyone but himself. Now I’m a bit older myself, listening to his usually slow, measured, thoughtful and expressive speaking voice had me trying to think about what he was saying rather than what I was hearing. I found him more interesting – and in a way even more mysterious – than I had before.

Rose has said he knew from an early age that he wanted to change his name, that he couldn’t be who the world had told him to be. That was the motivation for hitch-hiking to L.A. as a teenager, enduring a slum lifestyle and working hard on Guns N’ Roses until the band made it. I began to suspect that there’s a lot of complexity at work while considering how he refused a case containing $50,000 in cash to walk away from Guns and join a band with a label and a budget. He insisted Guns would be bigger than that, and he was right – but it also demonstrates that Rose wanted success on his own terms.

Of course, that’s a big ask in Hollywood. From the early days of fame, he was railing against how he was presented by the media. Not just what they wrote but how they wrote it, attributing phrases the band would never use that made them sound “dorky.” It was important to Rose to be seen as he wanted to be seen, but that wasn’t easy. It was also important to him to not be seen when he didn’t want to be; it appears clear that’s so he didn’t always have to be Axl and could sometimes be himself.

His message, I suspect, appears to include an element of “if I can do it, so can you” – which illustrates there’s more at work than a giant ego. The attention to detail in his musical output proves his creative genius, which he could easily have overlooked on the occasions when it came easy. The other side of that coin is when it wasn’t easy and he suffered under clouds of self-doubt. That’s also illustrated by Rose’s infamous late appearances on stage – something he tried to apologize for, explaining he’d give anything not to be the person who went through the emotional strain it took to get him on stage at all.

You can see why a reality distortion bubble might be of use to a character like that; but the one that was constructed around Guns wasn’t the one Rose needed. Despite that, it would do if his bandmates remained with him – but that wasn’t to be. When he refers to “hot tears of anger” and feeling like Slash had betrayed him by quitting, what if it’s an expression of horror and frustration that Rose wasn’t able to build a bubble good enough to protect his entire “family”? He couldn’t, of course, because they’re all individuals – and as time went by, they wanted different things.

When Guns N’ Roses collapsed, he needed to keep it going because even though the band wasn’t perfect, it was closer to his own thing than anything else could be. He didn’t want success as a solo artist; he wanted success as part of a family in a bubble, and keeping the project going was a mark of respect for everyone he loved. But he still couldn’t find the level of control he wanted, and that’s a significant contributor to the delays over Chinese Democracy: They kept taking his baby away and he kept wrestling it back from their hands, but the wrestling became the main occupation and he was left with nothing but his original frustration and ambition to escape control.

When the album finally did arrive it did help, and in the years that followed he built a version of Guns N’ Roses that he clearly loved and was proud of. The live shows were as convincing as they could be for anyone who didn’t just want Old Guns back. It got to the point that Rose – who’d finally managed to make his onstage persona one he liked, rather than just an out-of-control ball of energy – believed even he didn’t want Old Guns back. But of course he did. He owed them. He owed himself, and he still had to prove to himself and to the people he loved, and the fans he loved, that it had all been worth it.

These are not easy concepts to explain in front of tens of thousands of rock fans. They’re not easy concepts to explain via media outlets one has learned not to trust. Perhaps if they could have been explained, it would have been clearer to understand that Rose didn’t want a reunion precisely because he needed a reunion and therefore the reunion was in control, and he couldn’t allow that for his own good. What it took was for that sense of betrayal to be flushed out, through cautious contact with first McKagan and then Slash, via a management team he regarded as confidants. And then, crucially, a sharing of the responsibility the band feels for their music, their legacy and their fans.

You can’t have regrets; it’s just a waste of energy. You can and should learn from negative experiences. Then one day the realization comes that you achieved what you needed, regardless of whether it’s what you wanted. Rose finally got control of his world by trusting others enough to share control with them. With the angry, hurt intelligence of his early years bolstered by experience, he finally outran what he’d been trying to escape – because he didn’t need it any longer: the thing that made him Axl Rose.

Now he’s 60, and perhaps he can look back with some satisfaction and no regret at what it took to get him there. It’s also to be hoped that he can enjoy the next phase of his career such that it meets the expectations he had when he decided to change his name.