How INXS Fought Through Trouble to Make ‘Elegantly Wasted’ 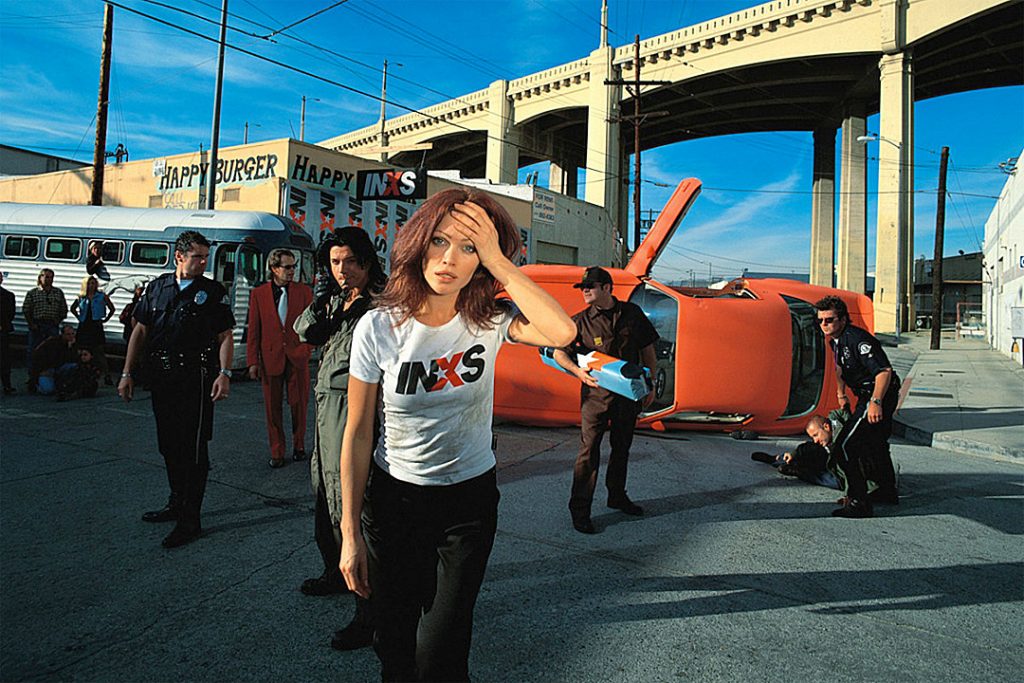 INXS rebounded from a creative lull with their 10th album, 1997’s Elegantly Wasted — only to see it all come crashing down due to a tragedy in the ranks.

After breaking through to the worldwide mainstream with 1985’s Listen Like Thieves, the band enjoyed a few years of global megastardom, scoring a massive multi-platinum success with 1987’s Kick and coasting off that momentum through 1990’s X. But diminishing returns struck their two subsequent efforts, and after limping through 1993’s Full Moon, Dirty Hearts, INXS went on hiatus for several years.

There was a period when it seemed like the group’s break might end up being permanent. Singer Michael Hutchence, who’d already dabbled in extracurricular activity with his Max Q side project in 1989, started working on a full-fledged solo LP in the years after Full Moon, Dirty Hearts, and his tabloid-friendly lifestyle — including his affair with Paula Yates, then the wife of Boomtown Rats frontman Bob Geldof — only furthered his reputation as a debauched star.

Hutchence’s troubles earned the most attention, but much of the INXS lineup was coping with some sort of turbulence or emotional trauma during this period. Multi-instrumentalist Kirk Pengilly was working his way through a divorce after a brief marriage to singer Deni Hines, and the Farriss brothers — bandleader Andrew, drummer Jon, and guitarist Tim — suffered the death of their mother. It all contributed to an air of exhaustion around the group and slowed their return after the conclusion of their longstanding association with Atlantic Records following the relative failure of the Full Moon, Dirty Hearts LP.

“We really wanted to get off the old carousel for a while. As a band, we’ve recorded an album every 12 to 18 months over the last five or six years. This helped to create a situation resulting in a lot of personal and business friction within the band, as well as the record label,” Hutchence explained. “It just seemed like the logical time to take a break.”

While Hutchence slowly worked his way through his solo LP, the group landed with Mercury Records, where they started work on their 10th album in late 1996. With Andrew Farriss alongside veteran hitmaker Bruce Fairbairn behind the boards, INXS started work on the set of songs they’d ultimately dub Elegantly Wasted. As Hutchence would later recall, although it took an extended period for the band members to find their way back together, the material fell together relatively painlessly; once he and Andrew Farriss resumed regular communication, the album quickly started taking shape.

“Andrew and I haven’t written this way in a long time. Over nine months, very casually, on weekends here, a week there, whenever we felt like it, we were writing songs and recording them,” Hutchence told the Orlando Sentinel. “Many of the songs were first and second takes, just like being a bedroom production. … The album was recorded in about eight days.”

If Elegantly Wasted had a happy gestation period behind the scenes, its birth was fraught with the same sales woes and personal issues that had plagued INXS in the years leading up to its release. Even after recharging with some time off — and switching labels — the band was unable to stall its worldwide commercial decline; in the U.S., the album peaked outside the Top 40, and in most other territories (including their native Australia), it stalled before reaching the Top 10. While the title track and leadoff single crept onto the lower rungs of Billboard‘s Top 40, none of the album’s subsequent singles charted in the States, and barely made a dent in the rest of the world.

But sales were hardly the band’s biggest concern. The Elegantly Wasted tour proved a personally difficult trek for a variety of reasons — difficulties in the various musicians’ private lives only underscored the shrinking crowds in certain territories and the feeling that INXS, pop trendsetters only a decade before, had fallen out of step with the times. They returned to Australia late in the year to prep for a series of homecoming dates, but the mood in the ranks was decidedly less than triumphant.

“Those were the saddest days of my life with the band,” lamented Tim Farriss. “I just didn’t want to be there. I drank a lot more than I should have and didn’t want to know about anything. What we needed to do was get off tour and lock ourselves in a house way out in the outback of Australia. We needed to get back to basics, and I really wish we did. We could have brought our families and just hung out in a compound of our own making for a while … it would have changed everything.”

Instead, things would change irrevocably for INXS when, on Nov. 22, 1997, Hutchence was discovered dead in his hotel room. The circumstances surrounding his passing were subject to no small amount of lurid speculation, but the result was the same regardless: the group was suddenly without a singer, and scores of recordings — including Hutchence’s long-gestating solo project — were left unfinished. It would be years before the band pursued a full-time return to action, and to say they struggled to find consistency at the lead singer position would be putting it mildly.

Although INXS would tour and record again in the years following Hutchence’s death, only officially calling it a day in 2012, Elegantly Wasted marked the end of an era. And while the album’s sales and reviews represented a substantial comedown from the band at its peak, it could easily have been a much more positive type of turning point, if only things had worked out differently.

“It felt like the tour was a bit of a midlife crisis for everyone because we were all dealing with things in our personal lives, as well as within the band,” reflected bassist Garry Beers. “We’d been through management changes and even though we’d always played well, we’d finally returned to a place where we felt that we were working hard with a purpose. And Michael was the force behind that. He was really into all of us being together, hanging out together and making music together like we hadn’t done in years.”