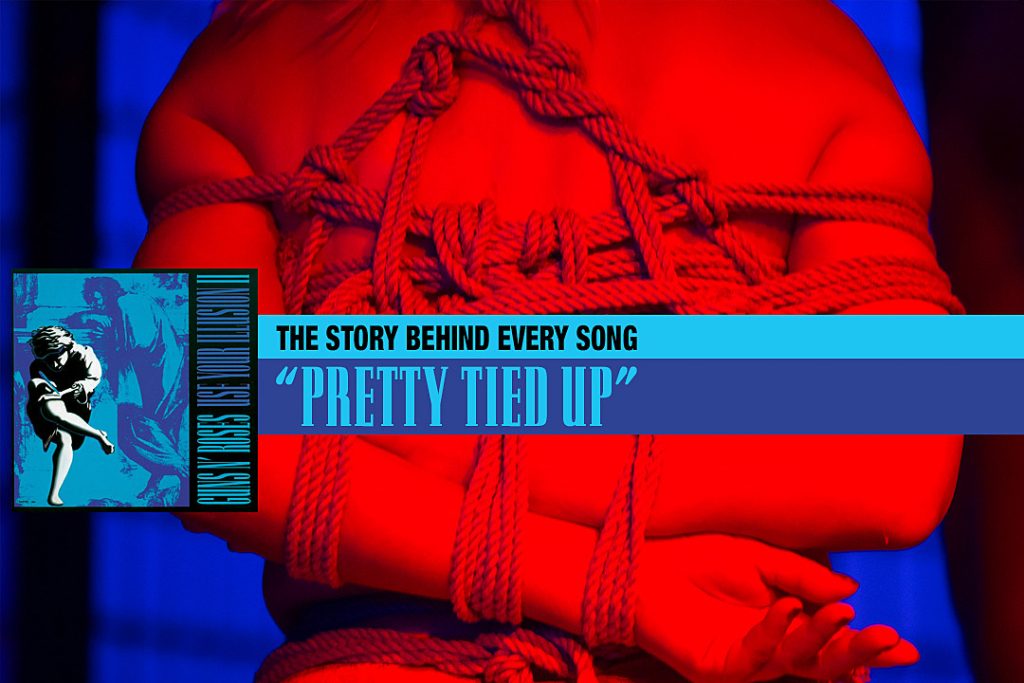 Izzy Stradlin had experienced more than his fair share of debauchery by the time Guns N’ Roses released their Use Your Illusion albums on Sept. 17, 1991, and he detailed his exploits on Use Your Illusion II‘s aptly titled “Pretty Tied Up (The Perils of Rock ‘N’ Roll Decadence).”

Guns N’ Roses began workshopping the tune one night at Stradlin’s house in Los Angeles before they flew to Chicago for some more concentrated songwriting sessions. One look around the guitarist’s filthy, disorganized pad showed just how dire his drug addiction had gotten.

“I was in the bathroom over there taking a leak when I noticed the two-inch-thick layer of dust in his shower and bathtub,” Slash wrote in his 2007 memoir. “That thing hadn’t been used for weeks — Izzy was that far gone.” Nevertheless, the band started working on the bones of “Pretty Tied Up.” Inspiration for the song’s electric sitar intro came from some stray pieces of musical gear and cleaning items laying around Stradlin’s house. “I remember that Izzy had taken a cymbal and a broomstick and some strings, and had made a sitar out of it,” Slash wrote. “Needless to say… Izzy was pretty fucking high.”

Stradlin has never publicly explained the rest of the lyrics to “Pretty Tied Up,” but the second verse — “Once, there was this rock ‘n’ roll band, rolling on the streets / Time went by, and it became a joke” — certainly seems like a thinly veiled allusion to his own dysfunctional group at the time. After Stradlin got sober in 1990, he came to resent the agonizingly slow pace at which GNR got anything done, which led him to quit the band in November 1991.

“I didn’t like the complications that became such a part of daily life in Guns N’ Roses,” he told Musician. “Sometimes for the simplest things to happen would take days. Time was so slow, you sat around for days just to do a photo shoot. … If you’ve got a group and people are focused, it just shouldn’t take that long.”

A look at some of Stradlin’s drug-fueled misadventures during that time makes it abundantly clear why he felt getting sober was a matter of life and death. In Mick Wall’s 2016 biography Last of the Giants: The True Story of Guns N’ Roses, former band manager Alan Niven recalled the time a zonked-out Stradlin called him and said in a chilling voice: “I found a million bucks that everyone’s forgotten about.”

Niven — who by that point had his hands full simply keeping his clients alive — had invited Stradlin to a meeting in 1989 where he negotiated a new merchandise deal for Guns N’ Roses. The band would receive a $2.5 million advance, with $1.5 million paid upon signing the agreement and the remaining $1 million placed in an escrow account until Guns met certain touring criteria.

“Not an unreasonable accommodation,” Niven said of the deal. “Until, of course, this sum and its disposition became the ‘missing millions’ of Izzy’s coke-fueled paranoia later in the year.”

Niven’s story matches the lyrics in the third verse of “Pretty Tied Up” — “I just found a million dollars that someone forgot / It’s days like this that push me over the brink” — almost verbatim. While Stradlin has never divulged the inspiration for those lyrics, it doesn’t take much to connect the two.

While Guns N’ Roses quickly replaced Stradlin with Gilby Clarke, his departure remained a sore subject among his ex-bandmates and fans alike. GNR never rocked with the same effortless swagger after Stradlin left, but with “Pretty Tied Up,” he bid a warm farewell to his days of rock ‘n’ roll decadence.