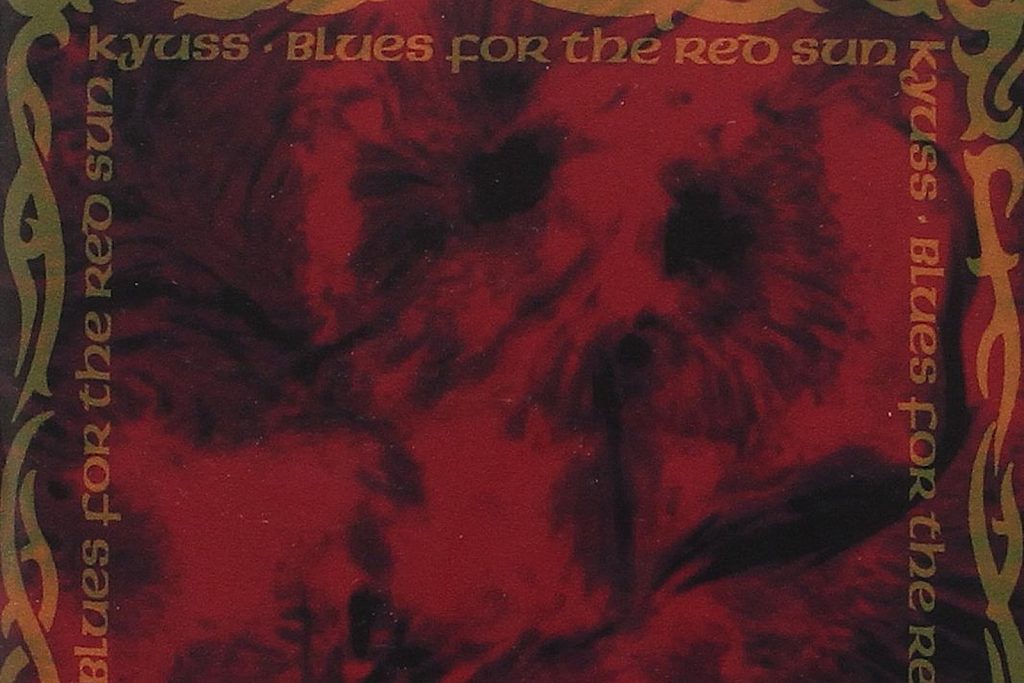 Producer Chris Goss made an apt comparison when asked to describe Palm Desert-born Kyuss‘ music: “This is what it sounds like where we live.”

Their second album, Blues for the Red Sun, arrived on June 30, 1992, as a perfect example, infused as it is with the feeling of the southeastern California desert that surrounds their hometown.

Epitomizing what has come to be known as “stoner rock,” it’s marked by a heavy, tuned-down, sludgy, riff-based approach that feels primal in exactly the way that the desert does, full of vast expanses and twisted piles of rock, wind-battered Joshua trees and cosmic stretches of stars. There’s a furious growl to the music that speaks of life laid bare to the elements and at the same time a psychedelic-tinged feeling of exploration that feels as big as a sunset over red rocks.

The landscape only plays one role, however, as the social scene also deeply impacted Kyuss. When they were coming up, their primary venue was the so-called “generator parties” that took place in the desert around the small towns in the area. The name referenced the fact that if people wanted music at the party, someone had to bring a gas-powered generator so the band could plug in.

Someone else would bring the beer, someone might get some barbecue, and more than one person often brought hallucinogens. By all accounts, these were wild, collectivist parties, the perfect setting for a young band to hone its anti-establishment chops.

“Occasionally the cops would show up, but what could they do when everyone just scatters?” vocalist John Garcia told The Guardian in 2011. He noted that the scene could also get a bit sketchy: “Sometimes you’d get gangbangers showing up with knives and guns. As soon as that started happening, I left.”

This scene didn’t just help shape Kyuss’ neo-psychedelic, wind-swept sound; it also lent an edge to punk communalism, which helped to differentiate their music from some of the more club and stadium-oriented metal of the era. Most of the guys in the band were influenced at least as much by punk music as they were by metal.

When guitarist Josh Homme (who would later go on to found Queens of the Stone Age) has given pride of place to groups like G.B.H. and Black Flag, telling Spin that the latter’s My War “really summarized Kyuss’ approach to punk.” Meanwhile, Garcia told the Guardian that he was “listening to the Smiths and the Cult; the rest of the guys were listening to the Misfits, Bad Brains, Black Flag, the Ramones. We knew that we wanted a sound that nobody else had.”

All of this came together on Blues for the Red Sun, the band’s first with Goss producing, to form a masterpiece. Drummer Brant Bjork and bassist Nick Oliveri play with an earth-shaking precision that also has just a touch of the groove-oriented looseness of ’60s era psychedelic rock. Homme runs his guitar through a bass amp to give it extra heft and sounds at times enough like Tony Iommi – both in his lead work and on the band’s riff-oriented jams – to draw the inevitable comparisons to Black Sabbath.

The comparison isn’t a bad one, particularly on the sludgy album-opening “Thumb.” But it doesn’t do justice to either the diversity of the band’s sound on the album or the way Kyuss managed to grapple all that diversity into a unified coherent package. Garcia’s approach to vocals, particularly on the album’s more spacious tracks like “Thong Song,” is often closer to the grunge sound coming out of the Pacific Northwest during the years the album was made than it is to classic heavy metal. At times, there are undeniable similarities between Soundgarden‘s Chris Cornell and Alice in Chains‘ Layne Staley in his voice.

The punk influence is obvious on a number of the short instrumental tracks scattered like connective tissue throughout Blues for the Red Sun and on the opening of a long, battering exploration titled “50 Million Year Trip (Downside Up).” But there’s also a side of Kyuss – the one which helped inspire the label of “stoner rock” in the first place – that bears comparison to the ’90s-era metal/prog/art-rock mashup approaches of bands like Tool and Nine Inch Nails.

“Freedom Run” is a seven-and-a-half-minute odyssey that stretches from a whisper and distortion-filled opening, through a heavy riff-based middle section, into an extended, fast intricate solo by Homme, to end on a blasting Sabbath-like groove. The six-minute album-closing “Mondo Generator” combines distortion-laden vocals with moments of cosmic drums and feedback that remind us we’re not just listening to a metal band, but something else.

In the end, Kyuss’ run was short-lived. They released two more albums after Blues for the Red Sun before moving on in 1995 to find success with other projects. Garcia, Oliveri and Bjork toured at one point as Kyuss Lives!, but they’ve never gotten back together for the full reunion desired by fans.

Perhaps Kyuss was an event more than a band, like the spiritual experiences in the desert that influenced their music. It was something that can be enjoyed but never really recreated.