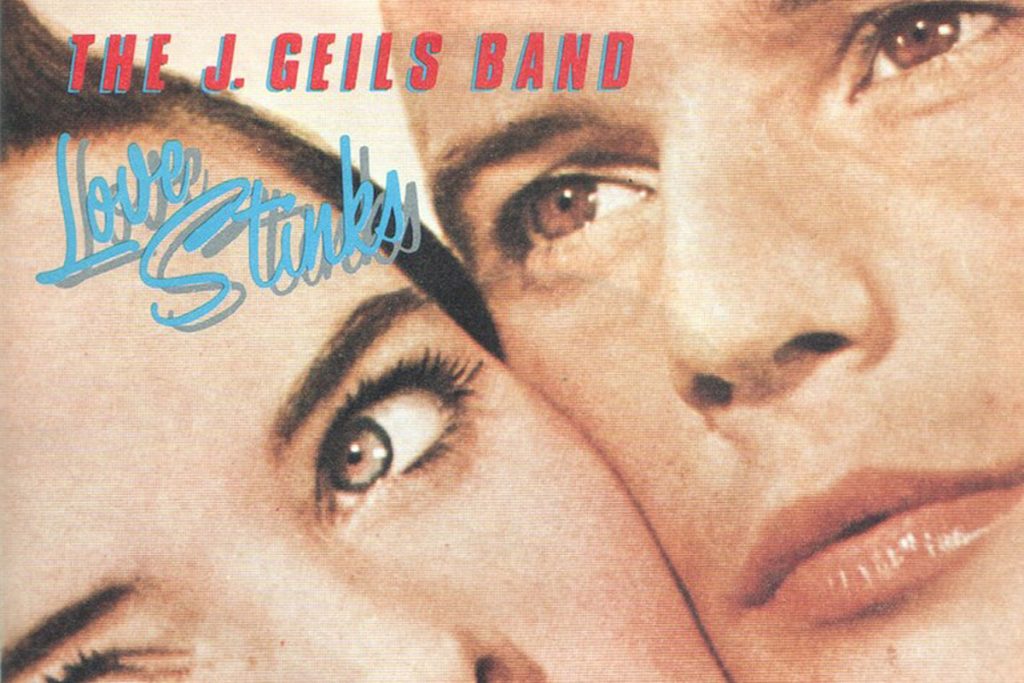 ADD A STRONGER LEDE “Love trouble started right back there in the Garden of Eden!” the J. Geils Band’s Peter Wolf proclaims to an enthusiastic audience at Detroit’s Pine Knob Music Theater during a gig recorded for the group’s 1982 live album Showtime.

ADD SOMETHING ABOUT SANDER’S Wedding Singer version, and the 1999 movie

Wolf then launches into a jive-talking alliterative ramble detailing egotistical hipster Adam’s discovery of marijuana, a munchies attack that prompts his raid on Eden’s 7-11, a food fight with his disgusted girlfriend Eve and an archangel intervening to break up the fracas by telling the couple to love one another. This shaggy dog story culminates with Eve saying, “Love? If you call this love, let me tell you Angel, love stinks!”

With that, the J. Geils Band launches into one of their best loved songs, the single that turned their fortunes around and allowed the veteran, workhorse band to bask in well deserved – and long delayed – commercial success. Released in April 1980, “Love Stinks” barely cracked the top 40, peaking in the U.S. at #38, but it’s the catalyst for the band’s subsequent success, a template for their 1981 platinum album Freeze Frame.

It’s only fitting that “Love Stinks” gets the most elaborate of Wolf’s many celebrated live intros because it’s the turning point for the J. Geils Band, the apotheosis of the group’s longstanding theme of unrequited love. To be sure, many of the band’s previous tunes address love gone astray. The ebullient “Looking for Love” ends with the song’s protagonist still searching for connection, and in another swaggering rant, this time from the group’s 1972 album Live: Full House, Wolf tells his audience that the tune “Musta Got Lost” is about relationships and desperation. Both these songs address love obliquely, but “Love Stinks” is on target. Spurred perhaps by the 1979 dissolution of Wolf’s marriage to Hollywood star Faye Dunaway, “Love Stinks” songwriters Wolf and J. Geils keyboardist Seth Justman approach thwarted love head on. The song is funny, memorable and it’s got a great beat, but there’s little doubt that it’s about failed romance curdling into cynicism.

Just as the tune’s lyrical bite get sharpened, its musical attack is tightened. The  syncopated funk and reggae tinged rhythms present on 1970s FM radio staples  like “Give it to Me’ or “Make up Your Mind” are streamlined into a four-four glam rock stomp, reverberating drums and crunchy guitars that wouldn’t be out of place on a Joan Jett album. In fact, Jett covered “Love Stinks” for the soundtrack of the 1996 movie Mr. Wrong. The wailing blues harmonica on “Cruisin For a Love,” gives way to bright synthesizers similar to the carnivalesque keyboards later heard on the Kinks’ “Come Dancing” and Dire Straits’ “Walk of Life.” Most important, the J. Geils Band’s James Brown and Isley Brothers influences, the inspirations for the R&B-and-funk infused rave-ups that characterized the band’s 1970s output, have been jettisoned for New Wave electro pop accents – spiraling synthesizer stings that zap like current jumping from a Tesla coil and a deliberately retro call-and-response doo wop chorus that sounds eerily like the Electric Light Orchestra. Despite the song’s disparate elements it all comes together due to Justman’s clean and unfussy production and the band’s in-the-pocket playing.

The tune’s success came not a moment too early. The J. Geils Band’s previous gold record had been their EMI debut Sanctuary, but it had been a long five years between that 1978 release and the band’s previous certified gold release, Bloodshot, an eternity in 70s pop music terms. With a punishing touring schedule, the band had earned a devoted live following, but record sales lagged. Love Stinks and its lead off self-titled single solidified the band’s standing with their new label, and in 1982 they would take their tightened musical and lyrical focus to the top with Freeze Frame, which peaked at number one in the US. Success was short-lived, however, with Wolf leaving the band in 1983 for a solo career. With Justman stepping in on vocals, The J. Geils Band released just one more album, the disappointing and dispirited You’re Gettin’ Even While I’m Gettin’ Odd before calling it a day.

But it was “Love Stinks” that primed the pump for commercial success, and twenty years later the tune is still durable. The New Wave nihilism that must have seemed up-to-the-minute and the state of the art 1980s production that should date it terribly, are tempered with the humor and soulfulness of Wolf’s wise guy vocals. Wolf has continued to play the song live, releasing a bluegrass version on his 2016 solo album A Cure for Loneliness.  The idea for a down-home “Love Stinks” arose one night before a live gig, Wolf has said.  He and his band were rehearsing some Bill Monroe songs, and started tinkering with “Love Stinks” bluegrass style. They played it live that night, and that performance is the version present on the solo album. New arrangements and experiments aside, “Love Stinks” endures because it entwines the two most attractive strands of the J. Geils Band, a kick-ass tune that doesn’t lose touch with the band’s good time rock ‘n’ roll roots and Wolf’s acerbic smart-ass standup. It’s cool that there’s a recording of Wolf’s jiving 1982 introduction to the tune, but it really isn’t needed. With “Love Stinks,” Wolf’s wickedly funny commentary about the fractious nature of male-female relationships is already woven into the song.