How ‘Monty Python and the Holy Grail’ Changed Comedy Forever 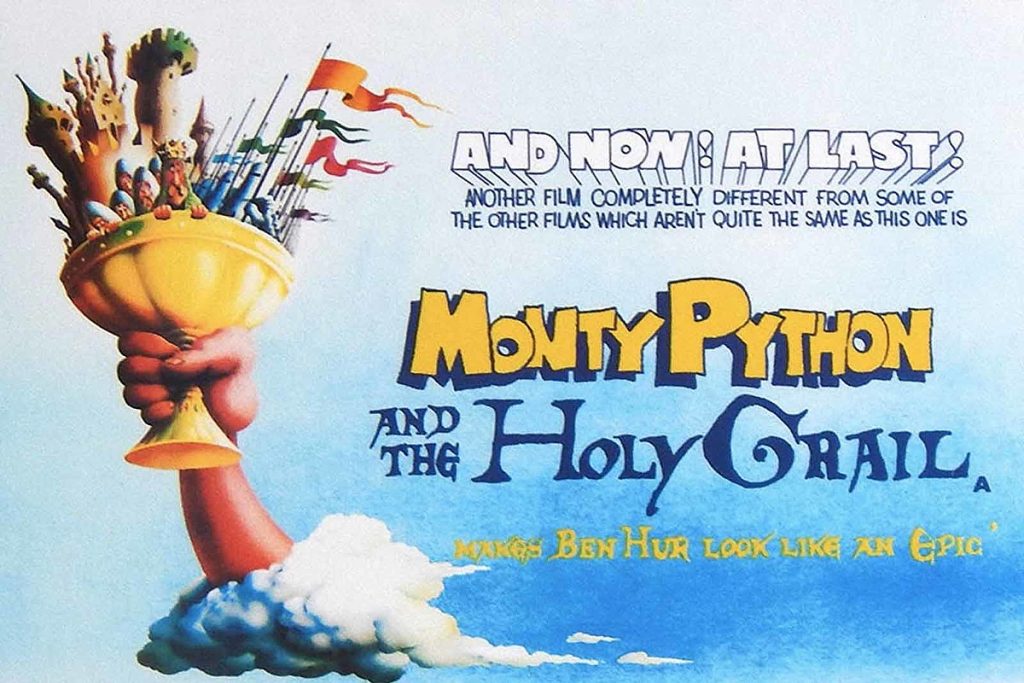 There has never been a movie with quite the combination of silliness and influence as Monty Python and the Holy Grail, and there may never be again. The first full-length film released by the Pythons after the end of their television show Monty Python’s Flying Circus brought their brand of absurdist humor to the big screen and in the process helped change comedy forever.

Monty Python consisted of two groups of college friends and a creative collaborator. The first included Terry Jones and Michael Palin, who met at Oxford University; the second group featured John Cleese, Graham Chapman and Eric Idle, who attended Cambridge together. The collaborator was Terry Gilliam, an American cartoonist who began by animating sequences between the sketches the others performed, but soon began to appear onscreen with them.

The five-year run of Monty Python’s Flying Circus, from 1969 to 1974, was a hit in the U.K., but slower to catch on in the U.S. It was limited initially to PBS, and only began to appear on network television in 1974. Its popularity quickly began to explode with American audiences, priming them for the appearance of Holy Grail, which took the group’s sketch comedy genius and melded it with a full-length narrative.

The movie – which premiered on April 3, 1975 – tells the story of Arthur, King of the Britons (Chapman), who assembles a group of knights to join him in his court at Camelot. They include Sir Bedevere the Wise (Jones), who initially demonstrates his wisdom through his logical deduction that if a woman weighs the same as a duck, she must be a witch; Sir Lancelot the Brave (Cleese), a formidable warrior much concerned with the idiom in which he fights; Sir Galahad the Pure (Palin), who is sorely tempted by 160 virgins who broadcast a fake grail-shaped beacon over their castle; and Sir Robin the Not-Quite-So-Brave-as-Sir-Lancelot (Idle), who is as cowardly as his name implies and pursued by a group of troubadours who sing a song reminding him of this fact.

It’s only after this motley group decides not to go to Camelot after all – a song and dance number taking place inside the castle convinces them that “it’s a very silly place” – that God himself appears to reveal their true mission: to find the Holy Grail.

Watch ‘Camelot’ From ‘Monty Python and the Holy Grail’

Off they go, into more absurdity. They encounter sorcerers, very tall knights who say “Ni,” a fearsome killer rabbit, a king forcing his son to marry against his will, arrogant Frenchmen, the Bridge of Death, a modern-day historian who is narrating their adventure when a knight rides by and kills him, a guard eating a raw onion, a man who grows shrubbery, peasants who have organized an anarcho-syndicalist collective and more.

At the end, the only two surviving knights – Arthur and Bedevere – finally reach the Castle of Aarghh, the resting place of the Holy Grail. Backed by hundreds of armed followers, they charge forward in a frontal assault. Unfortunately, they’re stopped by modern-day police, who are searching for the killer of the historian. Arthur and Bedevere are loaded into the back of a paddy wagon and one of the cops puts his hand over the lens of the camera, ending the film.

Proving the old truism that there’s nothing like comedy to confuse a critic, the initial U.S. reviews of the film were decidedly mixed. Gene Siskel claimed in the Chicago Tribune that the film “contained about 10 very funny moments and 70 minutes of silence,” and Geoff Brown, aiming for the highbrow audience in The Monthly Film Bulletin, wrote that the jokes “are piled on top of each other with no attention to judicious timing or structure” and that the movie “threatens to become as unyielding and unfruitful as the conventions it originally attacked.”

Viewed from a different perspective, these comments not only seem silly, but also revealing of a lack of foresight. What’s impressive watching the movie again with fresh eyes is both the sustained genius of the bits and the degree to which so much modern film and TV could not exist without the Pythons. The sustained absurdity of Holy Grail is not simply that of ridiculous characters; it also sends up the traditions of filmmaking in ways that anticipate both the acerbic and self-aware turn in comedy from the ’90s onward and the ironic trends of ’10s advertising.

This parodying of the movie form starts at the very beginning. After a ridiculous credit sequence featuring riffs on Swedish moose and Ralph the Wonder Llama, the title of the movie doesn’t appear onscreen for 25 minutes, making the pre-title sequences perhaps the longest in the history of film. At one point later on, an actress turns to the camera and asks the audience about the quality of the bit she’s doing (a staple of Flying Circus) and characters from other scenes in the film chime in to tell her it’s terrible. The animator who has been drawing sequences throughout suddenly dies (onscreen) two-thirds of the way through the movie; then there’s the gag of killing the historian who’s commenting on the film for us, and then having the knights arrested in the end for the crime.

Watch the Opening of ‘Monty Python and the Holy Grail’

The list of contemporary moments influenced by the movie is never-ending. There are the straight-faced bits on Saturday Night Live, the gonzo battle scene in Anchorman, the self-referential credits (and much of the rest) of Deadpool, the absurdist riffs of South Park and its cartoon descendants, ironic advertising from Joe Isuzu to “The Most Interesting Man in the World” and on and on.

As John Oliver wrote in The Guardian, “It’s probably more efficient to say that comedy writers should have to explicitly state that they don’t owe a significant debt to Monty Python. And if someone does that, they’ll be emphatically wrong.” In the hands of these mad geniuses, Camelot indeed did become a silly place. And it was a place that changed the world.