How Paul Simon Depended on Other Musicians to Make ‘Graceland’ 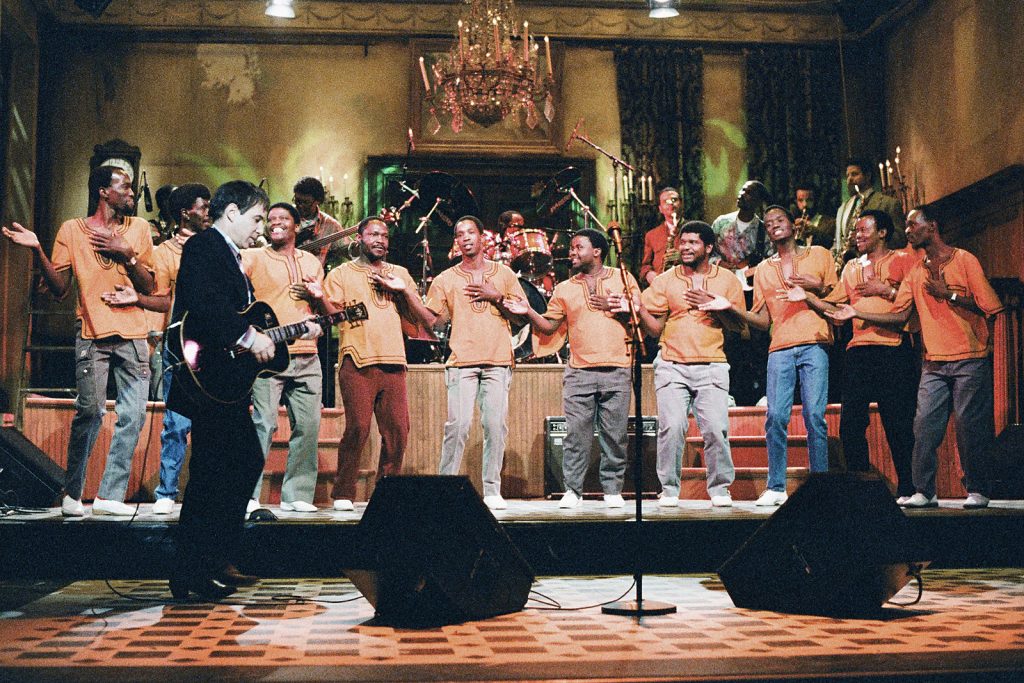 Paul Simon needed the talents of others to create Graceland. Not in an abstract, inspirational kind of way, according to many of the artists who worked on the record, but in a much more literal sense.

For instance, Los Lobos memorably appeared on the closing track “All Around the World or the Myth of Fingerprints.” Band member Steve Berlin says Simon basically nicked the song. It’s one of the many controversies that still surrounds this landmark album decades after its release on Aug. 25, 1986.

Graceland grew out of collaborations with a host of legendary and obscure talents, many of them coming from sessions in South Africa after Simon ignored an international boycott put in place by the United Nations Anti-Apartheid Committee. Some argue that exploitation played as large a role as collaboration, though making a final determination might be impossible. Documenting the many outside contributions, however, is not.

A track-by-track examination shows just how much help Simon had in crafting his Grammy-winning best-selling release:

‘The Boy in the Bubble’

Lesotho musician Forere Motloheloa ushers in the album’s opening track with a haunting and otherworldly turn on the accordion. First arrestingly alone then framed in reverb-heavy tom toms from Vusi Khumaloba and a slippery bass line by Bakithi Kumalo, the accordion part defines “The Boy in the Bubble” — so much that Motloheloa shares the songwriting credit with Simon. But the part also sets up what is to come: instrumentation, rhythms and melodic turns far from Simon’s singer-songwriter past.

Simon would crash worlds together with indispensable input from South African acts including the Boyoyo Boys Band, General M.D. Shirinda & the Gaza Sisters, and Tau Ea Matsekha (lead by Motloheloa, and sometimes written as Tao Ea Matsekha). “Every generation throws a hero up the pop charts, medicine is magical and magical is art,” Simon sings, reflecting on the modern world. “Think of the boy in the bubble, and the baby with the baboon heart.” Around him, innovator Adrian Belew of King Crimson lays down a strange guitar synthesizer swirl. But the heart of the track primes the ears for what’s to come: Old and new sounds from South Africa to Louisiana to Los Angeles meshed and mashed up in vibrant ways.

Simon looked to blend country music with what he was hearing in South Africa, and he was able to do that thanks to the harmony vocals of the Everly Brothers and Demola Adepoju’s pedal steel. The rhythm section of Khumaloba and Kumalo return with the key addition of Ray Phiri of the band Stimela on guitar. Phiri’s snaking lines gave much of Simon’s later work its dreamy, hypnotic aesthetic. Phiri can be heard on half of this record, a large chunk of 1990’s The Rhythm of the Saints, and live recordings of Simon’s during this time period. Like many musicians connected to this era, Phiri later said Simon should have admitted that he wasn’t the sole composer.

“There’s bad blood with Paul Simon,” Phiri told the Sunday Times before he passed away in 2017. “He never gave me credit on the album for the songs I wrote, and financially we hardly got any royalties. But maybe I wouldn’t have been able to handle all that wealth. I sleep at night, I have my sanity and I enjoy living. The big rock ‘n’ roll machine did not munch me.”

‘I Know What I Know’

General M.D. Shirinda and the Gaza Sisters provided the musical bedrock for Simon’s narrative. The lyrics wonderfully mock neurotic metropolitan cliches, like a riff on Woody Allen. The music is pure Shirinda & Sisters: Spin the group’s “Madala Kanje” and you can hear the distinct syncopation and melodic phrasing in the style of “I Know What I Know.” Shirinda wrote much of the music with the Sisters adding vocals. The liner notes simply label the performance “General M.D. Shirinda and the Gaza Sisters” without detailing who played the specific instruments.

In 1984, musician Heidi Berg loaned Simon a homemade cassette with the hand-written title “Accordion Jive Vol. II.” It was here that Simon fell for South African music, specifically an instrumental song by the Boyoyo Boys titled “Gumboots.” Simon had record execs track the band down and their South African jam sessions pushed the whole album forward. Lulu Masilela and Jonhjon Mkhalali, two of the Boyoyo Boys who took part in those jams, co-wrote the tune.

‘Diamonds on the Soles of Her Shoes’

The closing track to side one helped introduce the wider world to South African male choral group Ladysmith Black Mambazo. Led by the late Joseph Shabalala, who co-wrote “Diamonds,” the group opens the song with a transfixing a cappella section. Simon adds his tender lyrics to mix and something between gospel and isicathamiya, doo wop and mbube emerges. To accent both the African folk and American pop in “Diamonds on the Soles of Her Shoes,” Senegalese musician Youssou N’Dour (who also collaborated with Peter Gabriel) plays percussion and Saturday Night Live band members Lenny Pickett, Earl Gardner and Alex Foster add some funky horns.

‘You Can Call Me Al’

One of Simon’s biggest hit singles, “You Can Call Me Al” represents just how odd Graceland and pop music was in 1986. A total of 16 musicians are tallied as playing on the song (and that doesn’t include uncredited vocals from Ladysmith Black Mambazo). The sessions were so packed that it’s hard to pick out the most distinctive aspect of this minor masterpiece.

There are those subtle-but-essential vocals from Ladysmith: Think of the thick hum that underpins Simon singing, “bonedigger, bonedigger.” There is Morris Goldberg’s penny whistle solo and the impossible-to-play palindromic bass break from Kumalo (the second half is the first half played backwards). Belew returns to add more guitar synthesizers. A huge, eight-member horn section provides a hook millions of people know by heart. The midlife crisis wisdom is all Simon; the rest is an ingenious mix of Top 40, funk, mbaqanga and Brill Building craft.

Linda Ronstadt had already controversially broken the boycott and played in South African luxury resort Sun City when Simon asked her to help complete this song by describing her youth in the Arizona desert: “He called me up one day and said, ‘I’m having a hard time writing. Give me some images from your childhood,'” she later told Rolling Stone. “I said, ‘OK, I grew up in Tucson near the San Javier Mission.’ I’ve loved that place and considered it my spiritual homeland. I told him about the mission, and he included that part in the song.” Then Simon asked the singer to lend her voice to the resulting track. The vocals blend like magic over a soundtrack from African and American musicians and traditions.

Another case of Simon taking an already written song and adding to it, “Homeless” started as the work of Ladysmith Black Mambazo. Well, actually, it started as a traditional Zulu wedding song. Group leader Shabalala adapted the words for the introduction to “Homeless.” While recording the a cappella vocals at a session, Simon joined Ladysmith at the microphones. Shabalala is listed as lead vocalist and co-writer of the track, while Ladysmith appears as co-artist. Unlike some artists, Shabalala only had good things to say about Simon. “I nearly fainted!” he said of Simon joining in to sing in the documentary Under African Skies. “I’m thinking, who is this guy?’ He is my brother. Why is he hiding himself in America? I call him ‘brother.'”

Ray Phiri had an immense influence on the sound of Graceland. Maybe because he had an immense career. Long before Simon crossed the Atlantic for this album’s recording sessions, the guitarist had made a name for himself with his band Stimela. The new South African government honored Phiri with the Order of Ikhamanga in Silver after the Apartheid regime was toppled, offering a proclamation that read: “Stimela albums were compared to a silent revolution; nothing less than inspiring. Fifteen years before the advent of democracy in South Africa, when fellow citizens could finally air their views, creatively, Mr Phiri had charted that path, becoming one of the voices of the oppressed and downtrodden.” Stimela gets credit as a co-artist on “Crazy Love” and it’s impossible to imagine the song having the same wonder and energy without Phiri’s intertwining six-string contributions.

‘That Was Your Mother’

“At a dance hall in Lafayette, I saw the group Rockin’ Dopsie and the Twisters, and we went to a little studio behind a music store in Crowley, La., and recorded the song that became ‘That Was Your Mother,'” Simon told the New York Times just after the album’s release. The result was a tight pop song framed by stomping zydeco. The tune clearly echoes Dopsie’s “My Baby, She’s Gone” and depends deeply on the dirty Louisiana boogie of the Twisters, who are listed as performers but curiously not as writers.

‘All Around the World or the Myth of Fingerprints’

Some cheered Simon for bringing their work to an international stage. Others called him a thief. Los Lobos’ Steve Berlin hit hardest at Simon, explaining that the band’s sessions with Simon didn’t produce much until they started jamming on something Los Lobos had already written.

“We go into the studio, and he had quite literally nothing. I mean, he had no ideas, no concepts,” Berlin told LA Weekly in 2008. “I think [Los Lobos bandmate] David [Hidalgo] starts playing ‘The Myth of the Fingerprints,’ or whatever [Simon] ended up calling it. That was one of our songs. That year, that was a song we started working on By Light of the Moon. So that was like an existing Lobos sketch of an idea that we had already started doing. I don’t think there were any recordings of it, but we had messed around with it. We knew we were gonna do it. It was gonna turn into a song. Paul goes, ‘Hey, what’s that?’ We start playing what we have of it, and it is exactly what you hear on the record. So we’re like, ‘Oh, ok. We’ll share this song.’”

Simon denies this and the credit wasn’t shared. Los Lobos instead were listed only as a performer, and the band’s performance defined the sound of the song. The same style of blasting accordion, swampy stomp and Tex-Mex electric guitars can be heard in plenty on Lobos’ own masterwork from three years earlier, 1983’s How Will the Wolf Survive.

Paul Simon was always an uneasy folksinger, a role his record company tried to push him into starting with Simon & Garfunkel’s debut album.