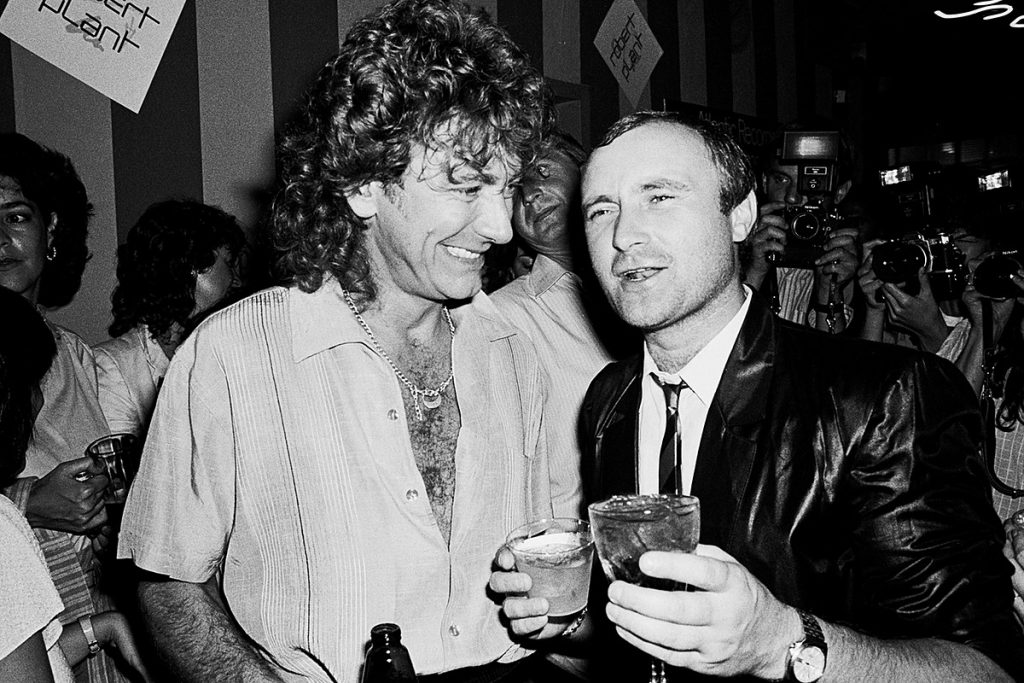 Robert Plant says Phil Collins was key to solidifying his career after Led Zeppelin, praising the Genesis drummer for helping “absolutely and admirably” as Plant learned how to work without his former colleagues.

Plant described how Collins provided support as he tried to turn a loose idea into something more meaningful in the latest episode of his Digging Deep podcast, available below. Collins even toured as a member of the band for a month, even though his own solo career was becoming massively successful.

“At the end of the ’80s, I had no place to go; John [Bonham] was gone,” Plant said. “So, I formed the Honeydrippers. We used to perform around the clubs of England for no money, and I played with this great band; they were really good players. The driver of our van, his name was Big Dave, used to go to the front door of the club and say, ‘Who’s playing here tonight?’ And if anybody mentioned me, we’d just drive on. It would have to be ‘the Honeydrippers’ and then we could play our stuff.”

He became disillusioned with the idea after a while. “There’s only so many times you can play Gene Vincent songs to 13 people in the Limit Club in Derby,” Plant added. “I thought, ‘I really want to know if we can make a big sound that sounds big, without it being really, really, heavy and tough.’ So, I pulled a band together.”

In the beginning, Plant was intimidated by what was expected of him in the studio. “It was the first time ever I’d been away from the creche of Zeppelin; I really didn’t realize just how much patience and concentration you really need in a studio to get people to perform, give you something really, really important – because Zeppelin seemed to roll out in some kind of magical way. It was a real new twist. … I had to really bluff my way through it because I really didn’t know studio etiquette, after all that success in Zeppelin. I never really went behind the desk at all, except for to push the vocal effects on the Zeppelin tracks a bit more, here and there.”

Plant continued: “I was helped absolutely and admirably by Phil Collins, who came along and said, ‘John Bonham was probably the most important influence in my life. I’ll sit on that stool for you.’” He described Collins as “an absolute restrained powerhouse” on Plant’s 1982 solo debut Pictures At Eleven and its 1983 follow-up, The Principle of Moments.

Crediting Collins’s “enthusiasm, unending energy and lots of humor,” Plant added: “We had really great fun. Then he came on tour with us. He said, ‘I can do this for a month,’ and that was when ‘In the Air Tonight‘ was just breaking. He gave everyone a coating every night on the bus for playing too slow – smooth and cool, you could call the guys, but Phil was having none of it! He’d stand up on the drum riser, sticks in his hands, ‘Get it right! Come on, let’s go!’”

Turning to his Top 20 hit “Big Log” from The Principle of Moments, Plant recalled: “So we had that great, tremulous thing going on, and I needed to soften it up a bit. So we turned on a TR-808 drum machine – what would we do without the hand claps on the TR-808? For me, I thought, ‘This is so shite, this sound!’ But somehow, if you play the right way with it … and Robbie Blunt, with his amazing eloquence on the guitar, started playing this melody line. And ‘Big Log’ was born.”

Plant said “Big Log” is about a journey through Wales, but he decided against including place names because they didn’t sound right in lyrics. “I couldn’t say where I was going, because I was probably going to Rhyll,” Plant noted, “but I could write about going.”