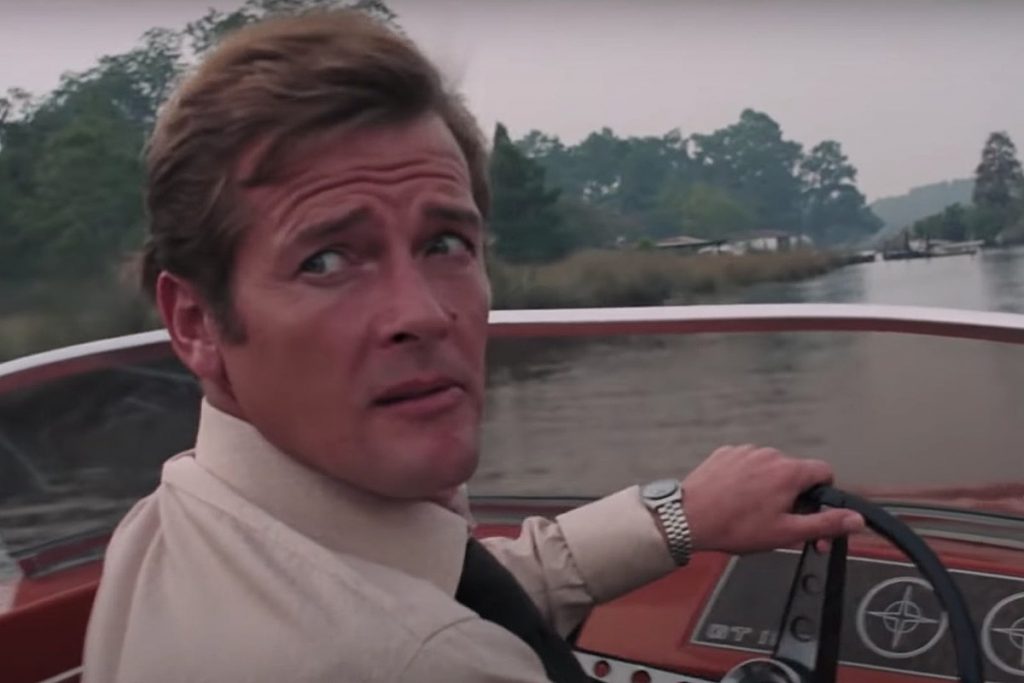 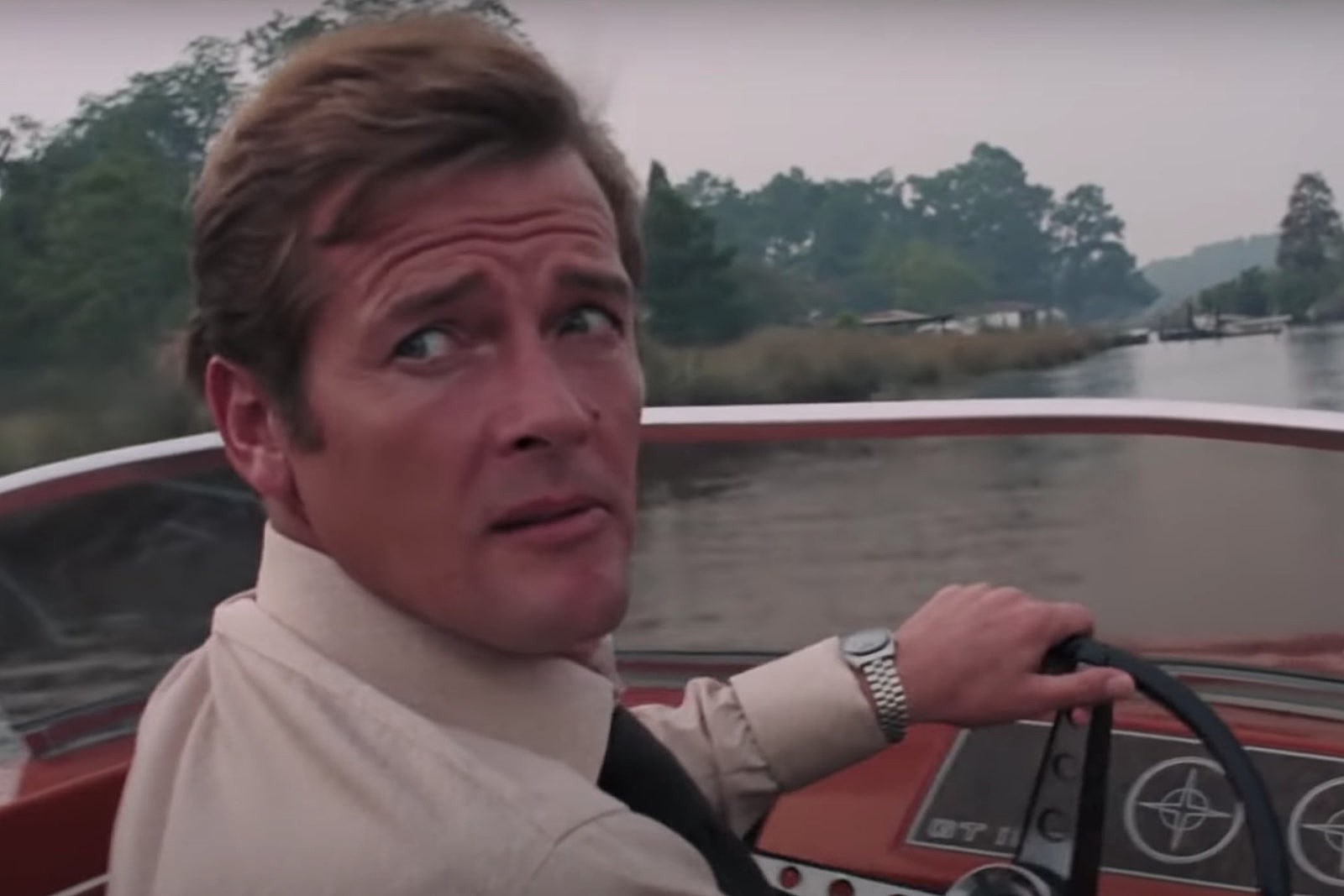 Roger Moore was already a famous actor in the U.K. long before taking over the James Bond franchise. Still, earlier successes in TV’s The Saint and The Persuaders didn’t necessarily point to an easy transition.

After all, as Moore was often reminded in the days before Live and Let Die premiered on June 27, 1973, he was no Sean Connery.

Moore put on a stern public face, memorably brushing back early critics: “I never saw what the fuss was about. Hundreds of actors have played Hamlet, so it should be the same with James Bond.”

Things were much different, however, behind the scenes.

“To say I was apprehensive about taking over from the great Sean Connery — the first and original 007 — would be an understatement,” Moore later admitted in The 007 Diaries: Filming ‘Live and Let Die.’ “I’d said as much to the late director Guy Hamilton when we met for oysters and martinis in London, soon after I knew I’d got the job.”

Over the course of six films dating back to 1962, Connery had so fully inhabited Bond that no one – not even Moore himself – could imagine anybody else in the role.

Still dining with Hamilton, Moore “confessed that when I was reading through the script, all I could hear was Sean’s voice saying, ‘My name is Bond.’ In fact, as I said my lines out loud, I found that I was doing them in a Scottish accent,” Moore noted in The 007 Diaries. “Guy had said: ‘Look, Sean was Sean, and you are you, and that is how it is going to be.'”

Watch the Official Trailer for ‘Live and Let Die’

Moore wasn’t the first choice for a film that ended up confounding more than one expectation. Producer Cubby Broccoli reportedly made an initial offer of $4 million if Clint Eastwood would take over for Connery, but Eastwood wasn’t sure anyone else could do justice to the Bond role. Burt Reynolds was apparently mentioned too.

Meanwhile, Moore had recently declined an offer to continue making The Persuaders. (The British TV show was produced at Pinewood Studios, where Connery’s initial farewell turn in Diamonds Are Forever was also shot.) Then co-producer Harry Saltzman called.

“Cubby and I have decided we want to go with you as the next James Bond,” Saltzman said, and “Roger was ecstatic – until Harry kept phoning with Cubby’s notes,” according to Tony Crawley’s Casting Calls. “Roger was overweight, out of shape and his hair was too long.”

Even though Saltzman took a more primary role behind the scenes with the movie, Broccoli would be intimately involved with shaping this new Bond: “His TV image was too glossy and soft-centered, compared with the virile dynamite we had in Sean,” Crawley remembered Broccoli saying. “Essentially, we had to bury The Saint and the lightweight giggling of The Persuaders.”

But Moore wasn’t content to imitate anyone. Finally, he shot back: “Why didn’t you just cast a thin, fit, bald fellow in the first place?” He’d be his own Bond, and fans responded: Live and Let Die went on to gross $161.8 million (or almost a billion in 2020 dollars worldwide), far exceeding even United Artists’ most optimistic predictions.

First, however, Moore would see a barber – and lose the extra pounds.

Watch the Crocodile Farm Scene From ‘Live and Let Die’

“I’d finished 13 and a half months of doing The Persuaders series with Tony Curtis. The character I played, I let his hair get longer and longer,” Moore told People in 2012. “Those were the days when I had enough hair for it to be wavy and grow long. We also indulged in quite a lot of champagne on the set of Persuaders, so I gained a little weight.”

What he never lost was a twinkling sense of humor that informed Live and Let Die, and then a record-breaking six more Bond films through 1985. Screenwriter Tom Mankiewicz – who’d already selected Ian Fleming’s second James Bond book as an inspiration – tweaked things to take advantage of Moore’s breezier persona, echoing an era of irony and extravagance.

“I mean, this man is supposed to be a spy, and yet everybody knows he’s a spy,” Moore later mused. “Every bartender in the world offers him martinis that are shaken, not stirred. What kind of serious spy is recognized everywhere he goes? It’s outrageous. So, you have to treat the humor outrageously.”

Connery later pinpointed the differences in approach, saying he leveraged comedy as he exited scenes while Moore entered with a wink. Over time these touches of humor metastasized into a more self-indulgent silliness, as the lean danger of this first star turn dissipated. Perhaps more than any other Moore film, Live and Let Die manages to balance both impulses.

Mankiewicz thought Fleming’s narrative involving a gold smuggler could be transformed into one focusing on an African-American drug lord, in keeping with edgier recent cinematic fare like 1971’s Shaft. Hamilton became intrigued by the prospect of doing something different, after initially saying Diamonds Are Forever would be his final directorial turn with Bond.

Live and Let Die started, appropriately enough, with a funeral, as mourners march down Chartres Street in New Orleans’ French Quarter, then move from Harlem to the fictional Caribbean island of San Monique in a tale marked by violence, mystery and voodoo.

Watch the Speedboat Chase Scene From ‘Live and Let Die’

Bond gets involved while looking into the questionable relationship between San Monique’s prime minister and a Harlem gangster known as Mr. Big who runs the perfectly named “Fillet of Soul” restaurant as front. (In a twist, Yaphet Kotto plays both characters.) Bond is guided along by an old CIA buddy (David Hedison as Felix Leiter), antagonized by a small-town Louisiana sheriff (played, oddly enough, by longtime New York City resident Clifton James) and enchanted by a tarot-card reader (Jane Seymour as Solitaire).

Along the way, Moore took the neophyte Seymour under his wing, deepening their onscreen connection. “I was really, really lucky, because he had every reason to be nervous himself,” Seymour told People in 2017. “It was his first Bond. No one could conceive of anyone being able to do what Sean had done. So, I can only imagine how hard it was for him, the pressure. But he took time out to be there for me as well.”

Throughout, Bond finds himself in fish-out-of-water moments better suited for the jocular Moore, as he began a run of straight-man roles opposite ever-more outrageous character actors (including James, who returned for 1974’s The Man With the Golden Gun). At the same time, Moore proved deft at more traditional action scenes, holding his own opposite Julius Harris (as Kananga’s henchman Tee Hee Johnson), walking over alligators and piloting a speedboat through a chase that ranks as one of the best sequences in the Bond filmography.

Moore’s presence wasn’t the only instance in which Live and Let Die shook things up. The cast also featured the first black Bond girl, though United Artists executives apparently balked at a suggestion that Seymour’s role be played by Diana Ross instead.

At the same time, the movie’s riff on blaxploitation films also opened the door for 007 to make forays into other genres, as the series adapted to the advent of Star Wars (1979’s Moonraker), Miami Vice (1989’s Licence to Kill) and the Jason Bourne franchise (2008’s Quantum of Solace). They also referenced kung-fu movies not once (The Man With the Golden Gun) but twice (1997’s Tomorrow Never Dies).

Credit – or, in some cases, blame – goes back to Moore and Live and Let Die. Ultimately, Broccoli became a huge fan too. “What Roger has done with the part,” Broccoli later told the Virginian-Pilot‘s Mal Vincent, “is sheer guts.”